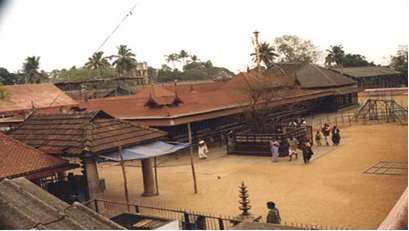 At a distance of 15 km from Ernakulam Junction (South) Railway Station, Raja Rajeshwari Temple situated near Chottanikkara is one of the most famous temples in Kerala. The presiding deity here is Raja Rajeshwari Devi, another form of Goddess Durga (an incarnation of Goddess Parvati).

The image of the deity is said to be self manifested with four arms, covered with a golden amour. This deity is worshipped in 3 different forms, as Saraswati in the morning, as Bhadrakali at noon and as Durga in the evening. Lord Vishnu, Brahma, Siva, Ganapathi & Subramanya are also worshipped in this temple.

People suffering from mental illnesses commonly visit the temple. The major festival 'Makam Thozhal' is celebrated for 9 days, in the month of February / March.