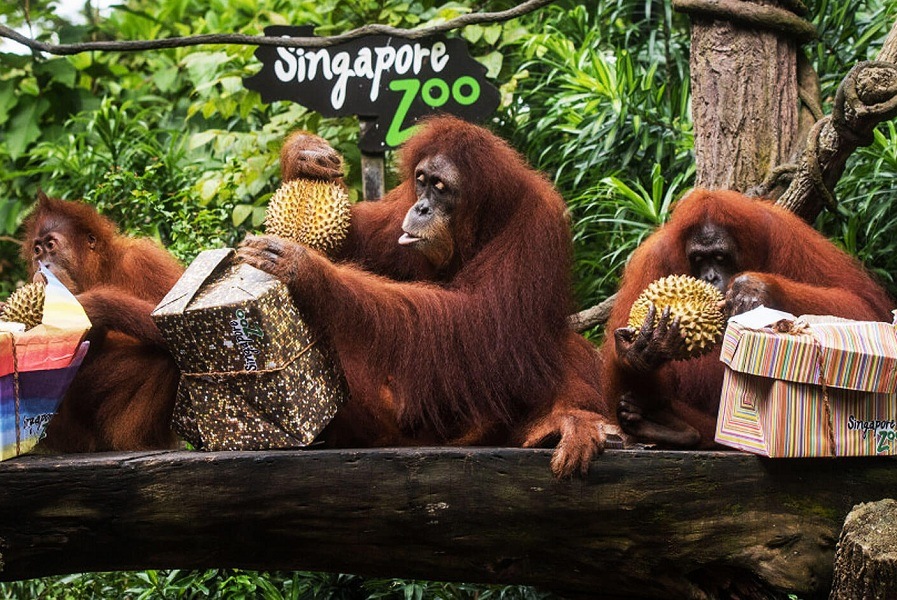 #4 of 24 Places to Visit in Singapore

Place Location: At The Central Catchment Area Of Singapore

At a distance of 27 km from Tanjong Pagar MRT Station and 31 km from Changi Airport, the Singapore Zoo is a zoological garden situated within the heavily forested central catchment area of Singapore. It is regarded as one of the best zoos in the world and among the prime places to visit during your Singapore Tour.

Formerly known as the Singapore Zoological Garden or Mandai Zoo, the Singapore Zoo occupies 28 hectares (69 acres) on the margins of the Upper Seletar Reservoir. The zoo was built with a cost of SGD 9 million granted by the government of Singapore and opened in the year 1973. It is operated by Wildlife Reserves Singapore, who also manages the neighboring Night Safari, River Safari, and the Jurong Bird Park. Awarded nine times as Best Leisure Attraction Experience by the Singapore Tourism Board, the Singapore Zoo welcomes approximately 1.9 million visitors annually. The zoo has not expanded beyond the original 28 hectares. However, 40 hectares of secondary forest were later developed into the Night Safari.

Divided into 11 Zones, the Singapore Zoo is accommodating over 2,400 animals representing around 315 species, 16 percent of which are considered endangered. The zoo boasts of free-ranging habitat, where animals roam freely in their natural surroundings. Cages are almost non-existent as the animals are allowed to live almost like they would in their natural habitat but are separated from the visitors by dry and wet moats. It houses the largest captive colony of orangutans in the world. One can see the iconic Asian elephants, Binturong, Himalayan Thar, Kangaroos, Mousedeer, Pelican and countless other variants of birds and animals at the zoo which will leave you awe-struck.

Since its opening in 1973, the zoo constantly strives to improve its programs and facilities. One of the innovative programs initiated by the zoo in May 1982 was the highly popular Breakfast with an Orangutan. In 1985, the zoo opened its first amphitheater for holding animal performances. The popular animal shows staged by the zoo are the Splash Safari, Elephants Presentation, Rainforest Fights Back and Animal Friends Show. In 1998, the zoo's first walk-through exhibit, Fragile Forest, was opened to the public. One of the world's largest ecosystem enclosures, the exhibit is a re-creation of the rainforest and features animal species such as lemurs, sloths, flying foxes, and butterflies.

Over time, the zoo has introduced various educational and outreach programs for young children, students as well as families. These programs include day and night camps, workshops and behind-the-scenes tours. The Kidzranger Tour, for example, is a hands-on educational program that allows children to become zookeepers and gain access to restricted areas in the Rainforest Kidzworld. Little ones can enjoy a never-ending list of fun activities such as feeding and petting goats or go on a pony ride. Have a splashing good time in the watery playground and head over to the Pets' Corner to see rabbits, chicks, and more pint-sized furry friends. Besides, several volunteer programs have been introduced to spread the conservation message.