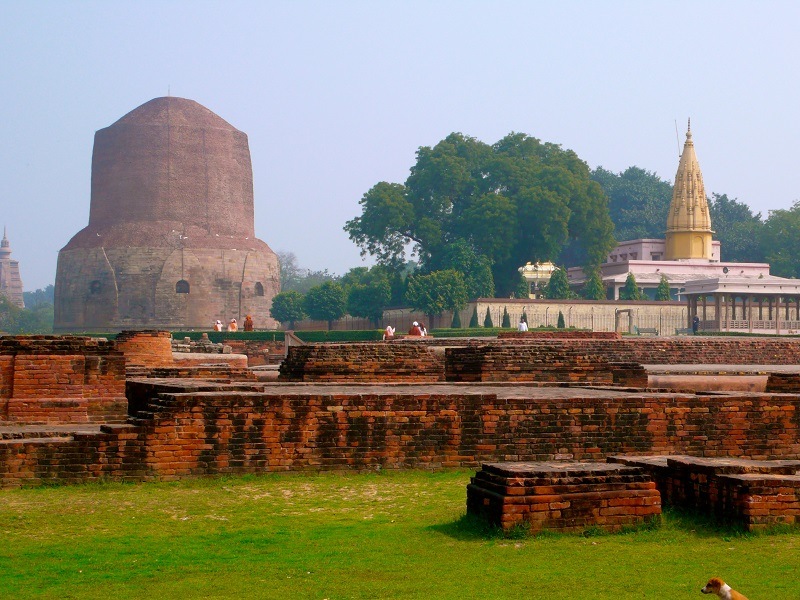 Also known as Ishipatna and Mrigadaya, Sarnath is one of the four most important Buddhist pilgrimage centers of India, the other three are Lumbini, Bodh Gaya and Kushinagar. According to the legend, Lord Buddha after attaining enlightenment at Bodh Gaya came to Sarnath and delivered his first sermon to his five disciples. It is also the place where the original Sangha was formed and a new order of religious doctrine (Dhamma) was laid. Sarnath is also sacred to the Jains as it is the site of asceticism and death of Shreyamshanath, the 11th Trithankara.

The great emperor Ashoka visited the holy land around 234 BC and constructed a Stupa. During the Golden Age of Gupta King Chandragupta II (376-414 AD), Sarnath developed as a flourishing center of art and culture. This prosperity continued till 1017 AD, when Mahmood Gajni began plunder and destruction of all monuments in Sarnath. These monuments were extensively plundered for building materials and have been in ruins since then, until Angarik Dharampal, a Srilankan Buddhist disciple restored the ruins.

There are many Buddhist monuments and edifices in Sarnath. Some of the important Buddhist monuments at Sarnath are the Dhamekha Stupa, the Chaukhandi Stupa, monasteries and temples. The Dhamekha Stupa is the best preserved and most impressive edifice at Sarnath. Standing tall with a height of 128 feet, this is the spot where the Buddha is said to have preached his first sermon. Tourists can also visit the nearby attractions such as Dharmarajika Stupa, Ashoka Pillar and Mulagandhakuti temple. Behind this complex, there is a Deer Park, which is maintained as an open animal park.

Sarnath Museum is one of the oldest museums in India, which was created by Sir John Marshall in order to preserve the antiquities that were found from the Sarnath excavation site in 1904. It displays a small collection of artifacts ranging from the 3rd century BC to 12th century AD. The main attraction of the Sarnath Archaeological Museum is the superb Ashokan Pillar.

The Chaukhandi Stupa is believed to be the place where Buddha met his first disciple. The stupa was originally built by Ashoka the great after he converted to Buddhism. There are a number of 20th century Buddhist temples in Sarnath. Many of these Buddhist temples at Sarnath are built and maintained by monks from Tibet, China, Sri Lanka and Japan. Tibetan Temple is the most popular place in Sarnath which houses the statue of Shakyamuni, the Buddha. Wat Thai Sarnath temple is one of the well-known temples built by Thai dignitaries in 1933.