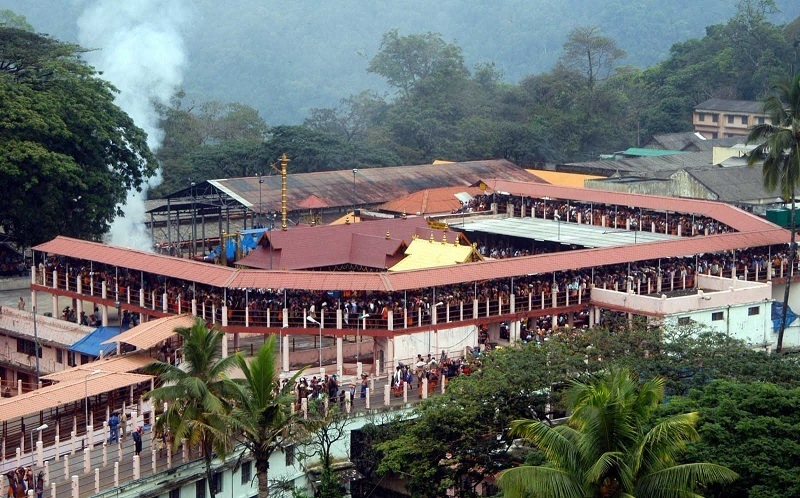 #1 of 6 Places to Visit in Sabarimala

At a distance of 8 km from Pamba, 158 km from Kochi, and 178 km from Trivandrum, Sabarimala Ayyappa temple is a famous Hindu temple located in the Pathanamthitta district of Kerala. It is one of the oldest temples in India, with a history of more than 5000 years old, and among the most famous pilgrimage sites near Kochi.

Also known as Sree Dharma Sastha Temple, Sabarimala temple is dedicated to Lord Ayyappa, who according to belief is the son of Shiva and Mohini, the feminine incarnation of Vishnu. The temple is situated on a hilltop named Sabarimala at an altitude of 3000 feet. It is the most famous and prominent among all the Sastha temples in Kerala. The traditions of Sabarimala are a confluence of Shaivism, Vaishnavism, and other Śramaṇa traditions.

The shrine of Sabarimala is an ancient temple. It is believed that the prince of the Pandalam dynasty, an avatar of Shasta, meditated at Sabarimala temple and became one with the divine. The place where the prince meditated is the Manimandapam. As per tradition, the Shasta temple at Sabarimala is one of the five Shasta temples founded by Lord Parasurama. The other four temples being the Ayyappan Temple at Kulathupuzha, Aryankavu Temple, Achankovil Shastha Temple, and Ponnambala Medu.

Regarded as one of the most famous places to visit in Sabarimala, the main temple of Lord Ayyappan is built on a plateau about 40 feet high. The temple was rebuilt after arson and vandalism in 1950. The sanctum sanctorum has a copper-plated roof with golden finials, two mandapams, the 'Kodimaram' or the flagstaff, and the Belikalpura which houses the altar. The Ayyappa idol which was initially carved out of stone is presently made out of Panchaloha, an amalgamation of five metals, and stands one and a half feet tall. The shrine of Kannimoola Ganapathi is southwest of the Sannidhanam. One can see that Goddess Malikappurathamma is placed left to the main Sannidhanam and the Lord's aides, Vavar and Kadutha stand at the foot of the 18 Holy steps (Pathinettu Thrippadi) that leads to the main sanctum during Sabarimala tour.

The pilgrimage season begins in November and ends in January. The temple remains closed during the rest of the year except for the first five days of each Malayalam month. The devotees following Ayyappa Vratam (Ayyappa Maala - a 41 days Vratam with strict restrictions) carry Irumudi Kettu containing traditional offerings to the Lord. Mandalapooja (Nov17th) and Makaravilakku (Jan 14th) are the important events of the temple. Makara Jyothi (a celestial star) appeared on Jan 14th is the most crowded occasion of this temple. Sabarimala can be reached by 8 KMs trek from Pamba, which is the nearest road point to the temple.

The Ayyappa Temple is one of the very few Hindu temples in India that are open to all faiths. The temple is open to males of all age groups, but women between 10-50 years of age group are NOT allowed into the temple.

1 Must Visit Places in Sabarimala

All Places to Visit in Sabarimala
All Sabarimala Tour Packages

Places to Visit in Sabarimala

How to Reach Sabarimala