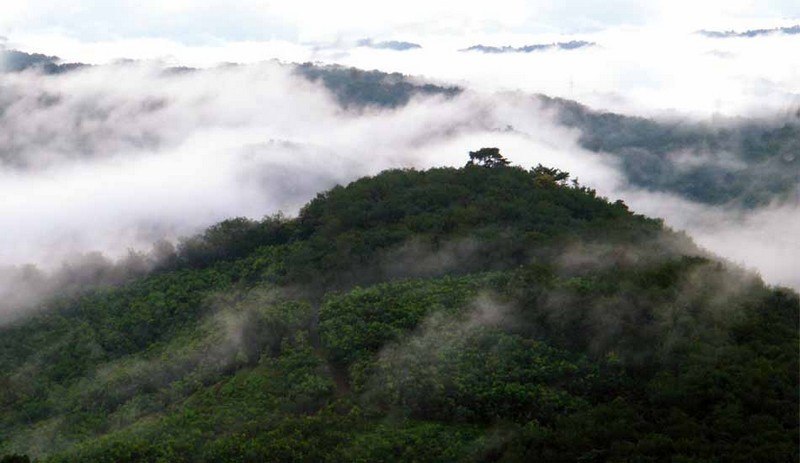 It is situated in the central Travancore region of Kerala, close to the Western Ghats. Pathanamthitta town is located on the banks of Achankovil and three major rivers of Kerala - Achankovil, Pamba & Manimala flow through the district. Pathanamthitta is a combination of two words Pathanam and Thitta which means an array of houses on the riverside. It is one of the famous places to visit near Kochi.

Pathanamthitta was formerly under the rule of a Pandalam king who had links with the ancient Pandya kingdom from Tamilnadu. These regions became part of this district when Pandalam was added to the princely state of Travancore in 1820. The district was formed on 1st November 1982 and it was carved out of Idukki, Alappuzha, and Kollam districts.

Pathanamthitta is close to the Western Ghats and is endowed with a scenic landscape comprising of low undulating hills, extensive stretches of lush forests, rivers, and charming countryside. Sabarimala is the famous pilgrim center situated in Pathanamthitta. Aranmula, the Kerala Institute of Folklore and Folk Arts at Mannadi, Konni elephant training camp, Pandalam, Perumthenaruvi Waterfall, and Maramon are other prominent places to visit in Pathanamthitta.

Pathanamthitta is famous for celebrating a variety of religious and social fairs and festivals. The most popular one is the festival season of Sabarimala that experiences over 4 million pilgrims every year. The 8 days Christian gathering at Maramon in February and the Chandanakudam festival at the mosque in the center of the town is quite famous. Pathanamthitta is also famous for rubber plantations.

The best time to visit Pathanamthitta is from November to March, while the peak seasons are August to September & November to February. It usually takes 1-2 full days to explore this area. It is best to avoid the summer and rainy seasons.

How to Reach Pathanamthitta - Full Details

Top 10 Places to Visit in Pathanamthitta

#1 of 28 Places to Visit in Pathanamthitta

At a distance of 15 km from Pathanamthitta, Sri Parthasarathi Temple is a famous Hindu temple situated at Aranmula. Located on the banks of the holy river Pamba, it is one of the most ancient places of pilgrimage in Kerala, and among the must include places in Pathanamthitta packages.

Sri Parthasarathi Temple is dedicated to Lord Sri Krishna. It is one of the 108 Divyadesams dedicated to Krishna, an avatar of Vishnu, who is worshipped as Parthasarathi. This temple is believed to be one of the five temples built by the Pandavas. The other four being Chengannur (Yuddhisthra), Tiruppuliyur (Bhima), Tiruvanvandur (Nakula) and Tirukkodittaanam (Sahadeva). Aranmula temple is said to be built by Arjuna to expiate for the sin of having killed Karna on the battlefield, against the dharma of killing an unarmed enemy.

According to the legend, the temple was first built at Nilakal .....

#2 of 28 Places to Visit in Pathanamthitta

At a distance of 70 km from Pathanamthitta, 158 km from Kochi, and 178 km from Trivandrum, Sabarimala is a revered Hindu shrine located in the Pathanamthitta district of Kerala. It is one of the famous places pilgrimage in India, and among the must-include places in Kerala tour packages.

Dedicated Lord Ayyappan, Sabarimala Ayyappa Temple is one of the oldest temples in India, with a history of more than 5000 years old. It is one of the most visited pilgrim centers in the world with an estimated 45 - 50 million devotees every year. The temple is situated amid 18 hills, at an altitude of about 3000 feet. It is believed that Lord Parasurama installed the idol of Ayyappa at Sabarimala.

The pilgrimage season begins in November and ends in January (the temple remains closed during the rest of the year except for the first .....

#3 of 28 Places to Visit in Pathanamthitta

At a distance of 9 km from Pathanamthitta, St. George Orthodox Church is a sacred church situated at Chandanapally in Pathanamthitta. It is one of the biggest churches in South India, and among the top pilgrimage sites near Kochi.

St. George Orthodox Church, Chandanapally or Chandanapally Valiyapalli is dedicated to St. George, the patron saint of England, who slew the dragon snake. As a village Chandanapally, literally means the abode of sandalwood trees, once had snakes of myriad shapes and venom crawling all over. The residents of the village reposed their faith in the saint to save them from not just snakes but ghosts, demons, and other dangers that lurked in the darkness. The first church in Chandanapally was built in 1810. It was renovated in 1875 and consecrated by his holiness Mar Abdullah, the Later Patriarch of Antioch. There was a reconstruction in 2000 which is famous for the huge size of its structure.

#4 of 28 Places to Visit in Pathanamthitta

This temple is believed to be more than 3000 years old, constructed in Kerala style of architecture. The idol of Goddess Bhadrakali is about 5.5 feet tall. More than 100,000 devotees visit this temple every week, with Tuesday and Friday being the most popular days for darshan. The temple is under the administration of Travancore Devaswom Board. The temple has beautiful wall paintings and attractive sculpture work.

It is the only temple in Kerala where the 'Satha Kodi Archana' is performed which is attended by large number of devotees. Malayalappuzha is connected by bus service with Pathanamthitta.

#5 of 28 Places to Visit in Pathanamthitta

At a distance of 10 km from Pathanamthitta, Konni Elephant Training Center is located near Iravan village between Pathanamthitta and Pathanapuram. It is one of the most prominent elephant training centers in Kerala and among the major tourist places in Pathanamthitta.

Located in a thick forest environment, this training center was used to train wild elephants. The big wooden cages used to put newly brought wild elephants for training are still an attraction. Locally known as Aanakoodu, they can house up to 3 to 4 elephants at a time.

The primary focus of the trainers here is to deal with the development of baby elephants that have been separated from their herd or been found hurt somewhere. The elephants are taught to obey specific commands and are taken for special exercise walks in the morning, are given baths and specific diets. At Konni, one gets to observe this training procedure in person. .....

#6 of 28 Places to Visit in Pathanamthitta

At a distance of 16 Kms from Pathanamthitta & 40 Kms from Sabarimala, Pandalam is a holy town as it is the birth place of Lord Ayappa in human form. Pandalam is famous for Sri Ayyappa Temple, Pandalam Palace & Pattupurukavu Temple.

Sri Ayyappa Temple:
Also known as Valiyakoikal Temple, it was built in the similar lines of Ayyappa Temple at Sabarimala. Pilgrims usually stop here to worship before proceeding to Sabarimala. Makaravilaku is the major festival celebrated at this temple in mid January. Three days prior to the Makaravilaku festival, the sacred ornaments of Sree Ayyappa are taken in a procession from Pandalam to Sabarimala.

Pandalam Palace:
This is the place where Lord Ayyappa has grown up during his childhood. It is located adjacent to Ayyappa temple.

Pattupurukavu Devi Temple:
At a distance of about half Km from Ayyappa Temple, it is dedicated to Goddess Bhadrakali. Annual festival is celebrated on .....

#7 of 28 Places to Visit in Pathanamthitta

At a distance of 26 Kms from Pathanamthitta & 10 Kms from Adoor, Mannady is the place where the great freedom fighter 'Veluthambi Dalava' sacrificed his life. The monument of his martyrdom is of great historical importance.

Mannady Devi Temple dedicated to Goddess Parvati is a shrine of historical and religious importance. Pazhaya Raja's family used to worship at this shrine. It is said that the Raja on his way to Sabarimala worships at this temple. This ancient temple is famous for its stone sculptures.

The annual festival celebrated at this temple is Ushabali - in the month of February / March. Mannady is also the venue of the Kerala Institute of Folklore and Folk Arts.

#8 of 28 Places to Visit in Pathanamthitta

At a distance of 26 km from Pathanamthitta, Perunthenaruvi Waterfall is a wonderful waterfall situated at Vechoochira village in Kerala. It is one of the famous Pathanamthitta sightseeing places, and among the major waterfalls near Trivandrum.

Situated in the forest region of Sabarimala, Perunthenaruvi allures tourists with its breathtakingly beautiful waterfalls and the dazzling stream that flows to merge with the sacred Pamba River. The locality is the home field of beehives which have bestowed the place with the title Perunthenaruvi meaning 'The Honey Stream'.

There are two waterfalls at Perunthenaruvi - the 300 feet Panamkudantha and the 200 feet Padivathil - both of these originate from the dense woods of Sabarimala. The stream gushes further beyond through the rocky bed to unite with the holy Pamba. This is a wonderful place .....

#9 of 28 Places to Visit in Pathanamthitta

At a distance of 15 Km from Pathanamthitta, 53 Km from Alappuzha & 57 Km from Kumarakom, Aranmula is a Aranmula Snake Boat Race, also known as Aranmula Vallamkali is a popular boat race held in the never ending Kerala Backwaters. This is an annual boat race held in Aranmula district of Kerala during the Onam festival in the month of August-September. It is also known as Uthrittathi Boat Race.

Aranmula Vallamkali owes its origin to the Sri Parthasarathy Temple situated on the banks of the Pamba River. The Vallamkali, associated with the annual festival of Sri Parthasarathy, is usually held on the last two days of the festival. The event that attracts tourists from all over the world is conducted not to win any trophy or prize but to celebrate the anniversary of the Sri Krishna idol installation, the main deity at the Aranmula Parthasarathy Temple. It is conducted in the Pamba River in .....

#10 of 28 Places to Visit in Pathanamthitta

At a distance of 70 Kms from Pathanamthitta, Kakki Reservoir is a scenic dam built across Pamba River. The reservoir is surrounded by valleys and forest of great natural beauty.

The forest surrounded by the reservoir has rich wildlife population, like Tigers, Elephants, Deers etc. January to May is the best time to visit this place.

There is very limited public transportation available to reach this place. It's advisable to hire private vehicle from Pathanamthitta.