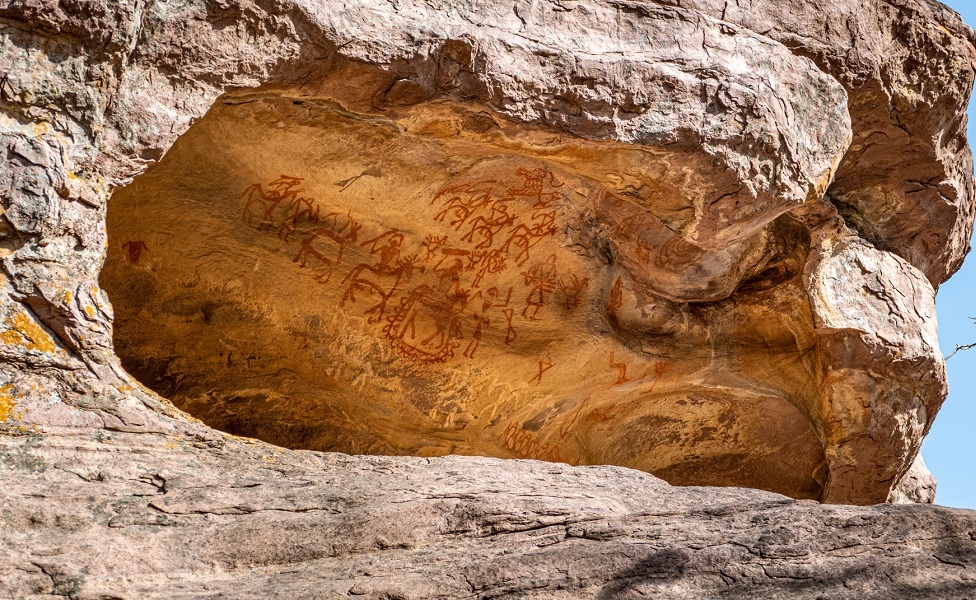 #2 of 9 Places to Visit in Bhimbetka

At a distance of 3 km from Bhimbetka Bus Stop, the Bhimbetka Rock Shelters & Cave Paintings is an archaeological site situated in Bhimbetka, Madhya Pradesh. It is one of the top places of heritage in Madhya Pradesh, and among the must-include places in Bhimbetka Packages.

Designated as a UNESCO World Heritage Site in 2003, the archaeological site of Bhimbetka is situated inside the Ratapani Wildlife Sanctuary, embedded in sandstone rocks, in the foothills of the Vindhya Range. It was discovered in the year 1957, but only in the 1970s that the scale and true significance of the Bhimbetka was discovered and reported. It came under the management of the Archaeological Survey of India in 1990 and was declared a World Heritage Site in 2003.

The site consists of around 750 rock shelters distributed over 10 km (6.2 mi). The Bhimbetka group contains 243 of these, while the Lakha Juar group nearby has 178 shelters. The rock shelters and caves provide evidence of a 'rare glimpse' into human settlement and cultural evolution from hunter-gatherers, to agriculture, and expressions of prehistoric spirituality. The Bhimbetka site is one of the largest prehistoric complexes and has the oldest-known rock art in India. Out of the 750 rock shelters, 500 are adorned with interesting paintings and the earliest are about 30,000 years old. However, only 15 caves are opened for visitors. The paintings in the caves are completely diverse in nature as the caves have been around for millennia. Executed mainly in red and white with the occasional use of green and yellow with themes taken from the everyday events of the people who lived in the caves.

Cave 1 has a board that explains the various layers of earth, almost 4m in-depth, and the exhibits found in these layers including microliths, pottery, paleolithic tools, Acheulean stone tools. They were excavated between 1973 and 1976. The Auditorium Cave or Cave 3 is the largest shelter, as well as the significant feature of the archaeological site of Bhimbetka. Surrounded by quartzite towers which are visible from several kilometers, the Auditorium Cave comprises a large horizontal tunnel roughly 25 m long leading to a cavernous high-ceilinged chamber with three passageway exits. Visitors can have a glimpse of various paintings of animals like deer, headless-tiger, cattle, and stylized peacocks are displayed beautifully on the walls.

Among the 15 rock shelters opened for the public, the Zoo Rock Shelter was the most exciting of all as it has a large number of animal paintings of all the caves. There are 453 figures in this shelter comprising 252 animals of 16 different species and 90 human figures. It contains paintings from 10,000 BC - made by lime and from 5,000 - 3,000 BC that were made by vegetable colors and iron. These drawings depict an array of animals that comprise Elephants, Bison, Sambhar, all varieties of Deer, Peacock, a Snake, and the sun. Hunting scenes with hunters carrying bows, arrows, swords, and shields also find their place in the community of these pre-historic paintings. Closeby is the Turtle Rock Viewpoint which holds an incredible panoramic view of the countryside below which was once a thick Jungle and Bheembetka Caves were Man's refuge from the forest and animals.

Visitors can notice the ancient Rock-art displays the community life of that time with group dancing, drinking, and playing musical instruments in Cave 6. White and red shades stand out in the paintings of this cave. Further, Cave 7 exhibited historical-period paintings with horse riders and deer, in white, though the horses had peculiar geometrical figures created out of triangles. Rock Shelter 8 is shaped like the Tiger's open Jaw and its ceiling holds an interesting depiction of Horse riders with swords in bright red colour. Cave 9 holds paintings of the Gupt period when the concept of agriculture had evolved and belong to the last period of man's stay in the caves, after which he moved into houses.

Rock shelter 10 has faded paintings and figures of Ganesha, Shivling, and Nandi which could have been from a later historical period when worshipping commenced. Cave 11 has a faded battle scene with two prominent Horse riders in white, while Cave 12 displays the Neelgaiand Deer Hunting. Here one can see a 'Duplex cave', nicknamed so because of the natural formation of two levels formed inside which look like a modern-day flat! It has a ground floor and a first floor that had offered shelter to 25 people, in the past. Cave 15 holds the famous exhibit named- Boar Rock that is taken after the painting of a giant supernatural mythical Boar chasing humans. 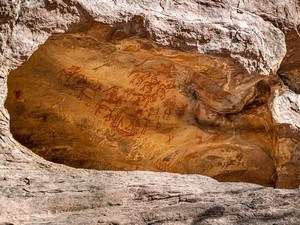 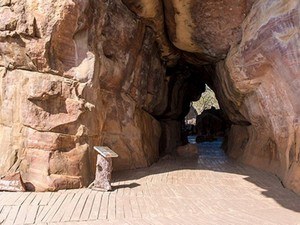 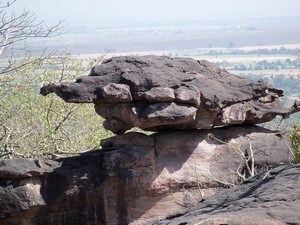 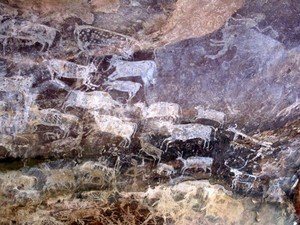 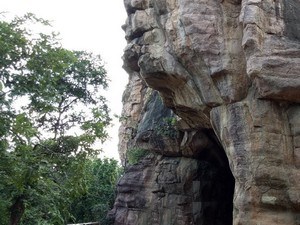 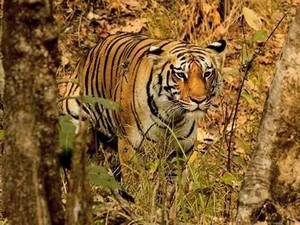