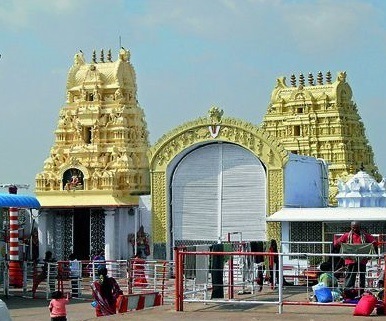 #1 of 2 Places to Visit in Yadagirigutta

Place Location: On The Hilltop In Yadagirigutta

At a distance of 1 km from Yadagirigutta Bus Station, Lakshmi Narasimha Swamy Temple is the prime attraction of Yadagirigutta. This cave temple is dedicated to Lord Narasimha, an incarnation of Lord Vishnu. Yadagirigutta Temple is situated on a large hillock which is about 300 feet high.

This is an ancient temple and built before 10th century. There is an inscription in Kolanupaka from 1148 AD by Tribhuvana Malla of Western Chalukya kingdom, mentioning a visit to his temple during his invasion of the region. Srikrishna Devaraya from Vijayanagara Dynasty mentioned his autobiography about his visit to the temple and his offerings to the lord.

The temple is built in Dravidian style with a large gopura at the entrance followed by several inner mandapas. There is a large maha-mandapa in front of the sanctum where the major poojas / events of the temple are performed. The garbhagriha is located in a narrow cave with the self-incarnated image of Lord Narasimha.

At the innermost sanctum of the temple, atop the sikharam, the golden Sudarshana Chakra of Lord Vishnu glows. The adornment is about 3 feet by 3 feet in dimension and it is the symbol by which the temple is identified by.

As per the local belief, Lord Narasimha has taken on the role of a doctor and is known as Vaidya Narasimha by his devotees at this shrine to cure many chronic diseases. The locals believe that worshipping in this shrine for 40 days will cure anyone of any longstanding illness.

Motorable road is available till the hilltop, while some pilgrims prefer walking from the bottom of the hill,

Annual Brahmotsavams are held from Shudha Vidiya to Dwadasi for 11 days (in February & March months).

1 Must Visit Places in Yadagirigutta 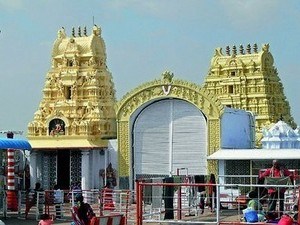 Places to Visit in Yadagirigutta

How to Reach Yadagirigutta