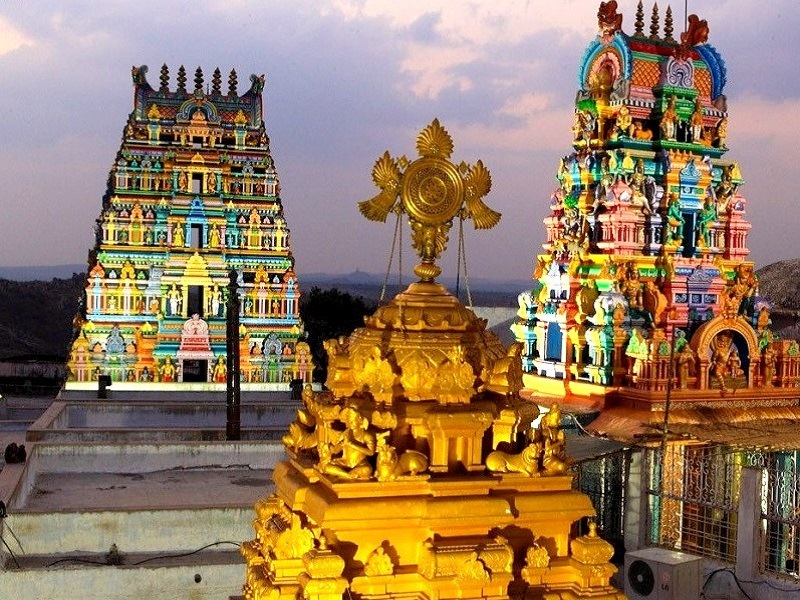 At a distance of 66 km from Hyderabad, 85 km from Nalgonda & 91 km from Warangal, Yadagiri Gutta is a popular pilgrimage town in Nalgonda district in the state of Telangana situated close to Warangal highway. It is famous for Yadagirigutta Temple, abode of Narasimha Swamy, an incarnation of Lord Vishnu. This cave temple is situated at an altitude of 300 feet on a large hillock. Yadagirigutta was earlier known as Vedagiri because it is believed that Lord Vishnu kept all the Vedas at this sacred place. This is one of the top tourist places to visit near Hyderabad and also one of the popular one day trip from Hyderabad. The official name of this place was recently changed to Yadadri by Telangana government.

In the sanctum of this hill temple Jwala Narasimha, Gandaberunda Narasimha (without an image) and Yoga Narasimha are held in worship, in addition to a silver image of Lakshmi Narasimha and a shrine to Aandaalamma. The top of innermost sanctum of the temple has a golden Sudarshana Chakra of Lord Vishnu. The adornment is about 3 feet by 3 feet in dimension and it is the symbol by which the temple is identified by from a distance. A legend about the chakra says that many years ago, it moved in the direction from which the devotees came, very much like a compass that guided them to the temple.

Surendrapuri, Lotus Temple and Bhongir Fort are the nearby attractions to this temple.

Hyderabad is the nearest airport, which is about 102 km from Yadagiri Gutta. It is well connected by both Rail and Road. The nearest Railway station is Raigiri (about 3 km) for passenger trains. The nearest major railway stations is at Bhongir (14 km) & Aler (14 km). There are number of buses from Hyderabad, Secunderabad and other parts of the state to Yadagiri Gutta.

The best time to visit Yadagiri Gutta is from October to March. The place witnesses a heavy rush during weekends, holidays and festivals. Accommodation is available with several temple guest houses and private lodges.

Annual Brahmotsavams are held from Shudha Vidiya to Dwadasi for 11 days (in February & March months).

How to Reach Yadagirigutta

How to Reach Yadagirigutta - Full Details

Top 10 Places to Visit in Yadagirigutta

#1 of 2 Places to Visit in Yadagirigutta

At a distance of 1 km from Yadagirigutta Bus Station, Lakshmi Narasimha Swamy Temple is the prime attraction of Yadagirigutta. This cave temple is dedicated to Lord Narasimha, an incarnation of Lord Vishnu. Yadagirigutta Temple is situated on a large hillock which is about 300 feet high.

This is an ancient temple and built before 10th century. There is an inscription in Kolanupaka from 1148 AD by Tribhuvana Malla of Western Chalukya kingdom, mentioning a visit to his temple during his invasion .....

#2 of 2 Places to Visit in Yadagirigutta

At a distance of 4 km from Yadagiri Gutta town, 5 km from Yadagirigutta Temple and 61 km from Hyderabad, Surendrapuri, also known as Mythological Awareness Center, is located in Nalgonda District of Telangana. The museum was established to create an awareness of Indian mythology. It was established by Kunda Satyanarayana in memory of his son Surendra. It is also known locally as Kunda Satyanarayana Kala Dhamam.

Surendrapuri is created as a center of artistic and sculptural excellence and an abode of all divine worlds. Visitors can have the darshan of all the deities of well-known pilgrimage centers of India. Here we get to see the replicas of all the famous temples of India at one place.