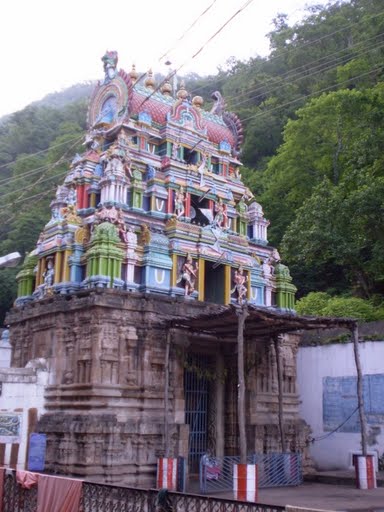 At a distance of 8 km from Lower Ahobilam, Upper Ahobilam is the abode of main shrine called Ahobaleswar. This is the main temple and the earliest of all nine Narasimha temples in Ahobilam. It is the prime place to visit in Ahobilam.

According to history of Ahobilam, Lord Narasimha gave his darshan to Prahlada after killing Hiranyakashipa. His anger was so intense when he finished slaying Hiranyakashipu that none of the Gods including Lord Shiva could calm him down. So they went to Mahalakshmi to seek her help. She came down as a girl from the Chenchu tribes and married him after which his anger got reduced.

The Upper Ahobilam Temple consists of mukha mantapa, maha mantapa and faces east but whereas the garbha griha faces north because of the orientation and situation of the natural cave. Adjoining the mukha mantapa, a dwajasthamba and an ornate Bali pith are situated. The sides and eastern gate leads to Malola and Jwala Narasimha shrines.

The main shrine at Upper Ahobila was carved out of a big egg like rock with mandapas. The sanctum is actually a low-roofed cave and it is believed that the idol here is Swayambhu (self-manifest). The Lord here appears in his fierce form, called Ugra Narasimha, who is also known as Ahobila Narasimha. A shrine dedicated to Chenchulakshmi is built beside the main deity. The exterior of upper Ahobilam is decorated with excellent sculptures. Also, the utsava murthy of Jwala Narasimha is worshipped here every day and Nityaabishekam and Kalyanam are performed here to Jwala Narasimha. There is a tank situated near the temple, which supplies water to the residents of the Upper Ahobilam.

The shrine is situated on a steep hill accessed from Lower Ahobilam through a narrow ghat road. The motor able road ends at a narrow passage near Bhavanasini River after travelling 6 km from Lower Ahobilam. The main temple can be reached by trekking up the hill from here on well laid steps for about 2 km. 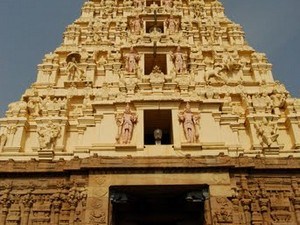 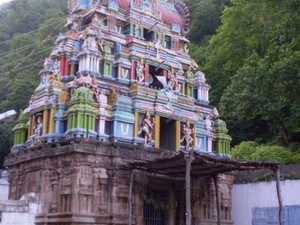