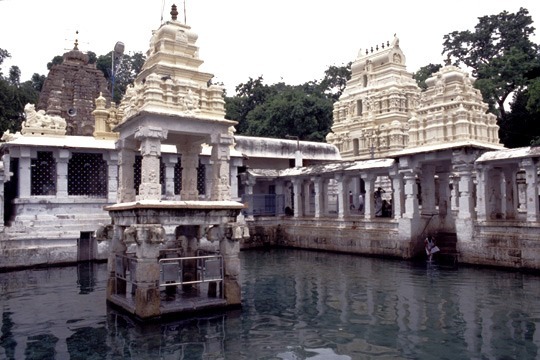 The 7th century Mahanandiswara Temple dedicated to Lord Shiva is very famous and sacred place. Though the initial structure was built by Chalukyas in 7th century, several additions were done in 10th and 15th centuries. The gopuram over central sanctum is built in Badami Chalukyan style of architecture and other structures in the temple are in Vijayanagara style. According to the legend, the local kings known as Nandas ruled here in the 10th century AD and they built a number of temples and worshipped their ancestral deity the Nandi, hence the name Mahanandi.

The remarkable feature here is the crystal clear water in Pushkarini which flows throughout the year. The water is so clear and pure that even a needle at the bottom can be seen clearly. There are nearly three pools in Mahanandi Temple. Two pools lie outside the temple. The third pool which lies within temple premises has uninterrupted water flow which originates from the basement of Garbha Gruha where main deity (Shiva Ling) is placed. This 60 square feet tank has a Mandapam at its middle and the inlet and outlets of tank are built in such away, the water level always remains at five feet high. Thus devotees can have a dip in this holy tank. Here devotees are allowed to offer prayers to Shiva Ling and touch the water underneath the Lingam in the main Sanctum Sanctorum. There is a huge Nandi statue outside the Mahanandiswara Temple.

Other places of interest include Kodanda Ramalayam and the Kameswari Devi Temple. Maha Shivaratri in February / March is the main festival celebrated here. Near the temple many lodges and Hotels are available along with AP Tourism Haritha Hotel.

Other Info
Internet Availability: Poor
STD Code: 08514
Languages Spoken: Telugu
Major Festivals: Maha Shiva Ratri (Feb/Mar)
Notes/Tips:
Mahanandi is 19 km from Nandyal. If you are visiting Ahobilam or Srisailam from Kurnool town, this place can be visited with 1-2 hours effort.

How to Reach Mahanandi - Full Details

Top 10 Places to Visit in Mahanandi

#1 of 7 Places to Visit in Mahanandi

Just opposite to Mahanandi Bus Station, Mahanandishwara Temple is one of the famous pilgrimage sites in Andhra Pradesh dedicated to Lord Shiva. There are nine Nandi shrines known as Nava Nandis and Mahanandishwara temple is the prime temple. The temple is said to have been built by Chalukyas in 7th century and was later enhanced by local Nanda Dynasty (10th century) and Vijayanagara Kings (15th century).

Located to the east of Nallamala forest range, the main attractions of the temple are Pushkarini and tower (Vimana) over the Garbha gruha built in Badami Chalukyan style. Other structures in the temple are in Vijayanagara style. The linga in the central sanctum is unique because it is like a rough uncut rock, with two cavities. According to the legend, the local kings known as Nandas ruled here in the 10th century AD and they built a number of temples and worshipped their ancestral deity, Nandi.

#2 of 7 Places to Visit in Mahanandi

At a distance of less than 1 Kms from Mahanandi Bus Station, Kameshwari Devi Temple dedicated to Goddess Parvati is situated to the south of Mahanandiswara Temple. Pilgrims after finishing the holy bath in Pushkarini (Rudragundam) can have the blessings of Lord Shiva and Kameswari Devi.

King Nandana and his ancestors performed Pujas in this temple. Kameswari Devi Temple was reconstructed in 1939. In this premises of this temple, Sri Kodanda Ramalayam dedicated to Lord Rama was built in 1953. The temple has Sri Rama, Sita, Lakshmana Idols.

#3 of 7 Places to Visit in Mahanandi

Situated amidst dense Nallamala Forest, Ahobilam is one of the 108 Divya Desams. This place is also called as Nava Narasimha Kshetra since Lord Narasimha is worshipped .....

#4 of 7 Places to Visit in Mahanandi

#5 of 7 Places to Visit in Mahanandi

#6 of 7 Places to Visit in Mahanandi

#7 of 7 Places to Visit in Mahanandi

At a distance of 31 km from Mahanandi, 33 km from Nandyal, 77 km from Ahobilam, 110 km from Kurnool, 143 km from Kadapa, 167 km from Srisailam, and 328 km from Hyderabad, Pacherla is a tribal village situated near Nandyal in Kurnool district of Andhra Pradesh. This is one of the eco-tourism projects initiated by AP Tourism and among the best weekend getaways near Hyderabad.

Nallamala Jungle Camp at Pacherla is a community-based eco-tourism initiative which was started in 2017. The main aim of the camp is to elicit local support for wildlife, to impart conservation education to the visitors and to empower the local communities improving their livelihoods. Pacherla is the one among the three locations of eco-tourism programs initiated by Andhra Pradesh Government in Nagarjunasagar - Srisailam Tiger Reserve; the other two are Thummalabailu and Bairluty.