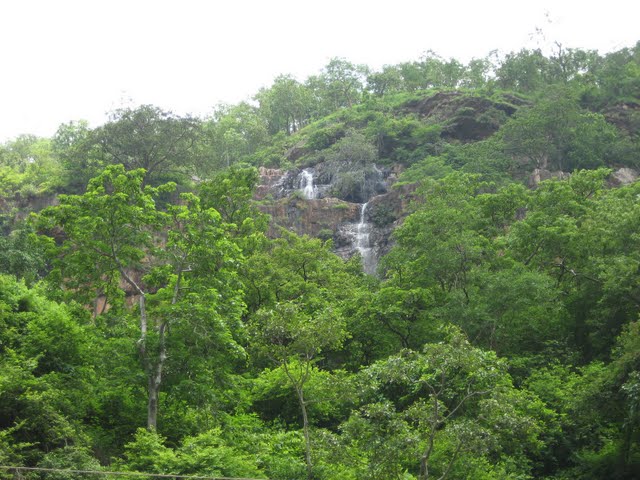 Peak Season: February to May

Ahobilam is a small town and food is available at small hotels and canteens. There is a Brahmana Nitya Annadana Satram in the Upper Ahobilam where food is provided daily for nearly 400 people. In addition, Sri Ahobila Matham has established a trust called Annamacharya Nitya Annadana Trust. Food is provided free of cost to the devotees of Sri Lakshmi Narasimha Swamy.

Brahmothsavam is celebrated in the month of February to mid-March. All the 9 shrines can be visited in 2 days with help of guide.

How to Reach Ahobilam - Full Details

Top 10 Places to Visit in Ahobilam

The Lower Ahobila Temple lies in the center of three Praakaras built in Vijayanagara style. The main temple at the lower Ahobilam consists of a Sanctum, a Mukhamantapam and a Rangamantapam all of which are decorated with excellent sculptures on the pillars. The massive composite pillars in the Rangamantapam are carved with figures of Yakshas riding on Yalis and horses with their rear legs mounted on the Makaras. Large figures of musicians, sensuous women, divine figures of Rama and Laxmana are in good shape. The Narasa Nayaka figure of Vijayanagara Empire in the temple is attractive.

In lower Ahobila, Narasimha Swami can be seen in a peaceful .....

At a distance of 8 km from Lower Ahobilam, Upper Ahobilam is the abode of main shrine called Ahobaleswar. This is the main temple and the earliest of all nine Narasimha temples in Ahobilam. It is the prime place to visit in Ahobilam.

According to history of Ahobilam, Lord Narasimha gave his darshan to Prahlada after killing Hiranyakashipa. His anger was so intense when he finished slaying Hiranyakashipu that none of the Gods including Lord Shiva could calm him down. So they went to Mahalakshmi to seek her help. She came down as a girl from the Chenchu tribes and married him after which his anger got reduced.

The Upper Ahobilam Temple consists of mukha mantapa, maha mantapa and faces east but whereas the garbha griha faces north because of the orientation and situation of the natural cave. Adjoining the mukha mantapa, a dwajasthamba and an ornate Bali pith are situated. The sides and eastern gate leads to Malola and Jwala Narasimha .....

The 7th century Mahanandiswara Temple dedicated to Lord Shiva is very famous and sacred place. Though the initial structure was built by Chalukyas in 7th century, several additions .....

At a distance of 2 kms from Lower Ahobilam, Bhargava Narasimha Temple is located on a hill near a sacred pond known as Bhargava Theertham where Bhargava Rama performed his penance. Hence the Lord of the temple is called Bhaargava Narasimha Swamy.

At a distance of 2 Kms from Lower Ahobilam, Yogananda Narasimha Temple is the place where Lord Narasimha is appeared in yogic posture.

The legend says that, after killing Hiranyakasipu, Lord Narasimha taught Prahlaada the principles of the ancient spiritual system through several yogic postures. Hence, the Lord at this place is called Yogananda Narasimha.

This place can be easily accessed by road from Lower Ahobilam.

At a distance of 2 Kms from Lower Ahobilam, Chathravata Narasimha Temple is shrine where the Lord is found in joyful mood.

The shrine is named after the tree under which it's built, Chatravata, it houses a joyous form of Narasimha. The face of the idol is filled with smile and the left hand is in the position of taala, the rhythm of classical music. The legend says that two Gandharvas once delighted the lord with their soulful music. Pleased with their performance, Lord asked if they had a wish. They requested that their names forever be associated with appreciation of dance and music. And, 'Aaha' and 'Oohu' came to be the exclamations of praise.

This place has an approach road and vehicles can drive up to the temple surroundings.

At a distance of 9 Kms from Lower Ahobilam and 1 Km from Upper Ahobilam Temple, Kroda Narasimha Temple houses the Lord in two different forms called Varaha (another incarnation of Vishnu) and Narasimha in angry form. This temple is also referred as Varaha Narasimha Temple and is among famous places in Ahobilam.

The lord is depicted here in the form of a boar carrying Mother Earth. Here the deity is seen along with his consort Lakshmi.

This place has to be reached by trek from the main shrine of Upper Ahobilam. The trek passes through thick forest with wooden bridges built across beautiful tiny streams.

This temple is on the trek way to Jwala Narasimha Temple and Ugra Sthamba.

At a distance of 7 Kms from Lower Ahobilam and 1 Km from Upper Ahobilam Temple, situated on ghat road between Upper and Lower Ahobilams, the Karanja Narasimha Temple is named after the tree under which the idol is installed. It is among popular places to visit in Ahobilam.

Here, the idol holds a bow, which in the uniqueness of the idol. According to legend, Lord Hanuman has meditated here and when Narasimha appeared, Hanuman refused to recognize his god in any form but Rama. As per the wish of Hanuman, Narasimha has appeared in Rama's characteristic weapon, the bow.

At a distance of 2 Kms uphill from the Upper Ahobilam Temple, Malola Narasimha can be found in soumya or graceful form. The word 'Malola' means 'beloved goddess', and the lord is seen here with his consort Lakshmi on his knee.

This place has to be reached by trek from the main shrine of Upper Ahobilam. the surroundings offer excellent view of Nallamala Range.

At a distance of 4 Kms from Upper Ahobilam Temple, Jwala Narasimha Temple is said to be the place where the actual destruction of the demon Hiranyakashipu took place. The idol here is in fearsome mood with Hiranyakashipu stretched across his lap. It is one of the important attractions in Ahobilam and a good place for trekking in Ahobilam..

This place can be reached from Upper Ahobila temple by trekking along the Bhavanasini River to the peak of the Achalachaya Meru Hill. The path is filled with gorgeous views of Nallamala Hills and a wonderful waterfall on the way. There is a pond on the way that is filled with dark red water like blood, looks like a place where the Lord must have washed the blood off his hands after killing the demon.