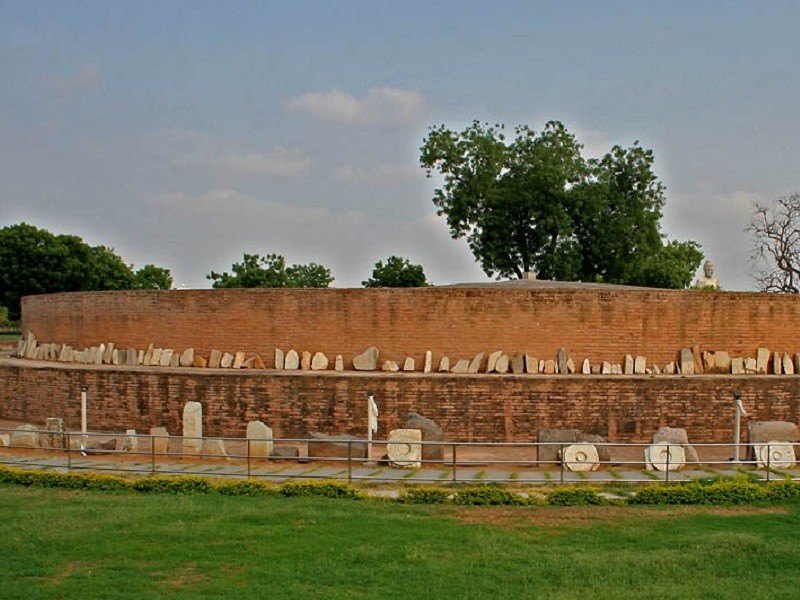 #1 of 6 Places to Visit in Amaravati

At a distance of 1 km from Amaravati Bus Station, Amaravati Stupa is a ruined Buddhist monument located in Amaravati, Andhra Pradesh. Popularly known as Mahachaitya or Great Stupa of Amaravati, it is one of the largest stupas in India and among the must visit places in Amaravati.

The great Buddhist Stupa or Mahachaitya of Amaravati is one of the greatest architectural achievements of ancient India. It was founded in the 3rd-2nd centuries BC during Ashoka Maurya' reign and enlarged in the 1st-4th centuries AD under the Satavahana and Ikshvaku patronage. It was a center of religious activities till the 14th century AD. Eventually, it fell into disuse and was rendered invisible by being covered in dust and debris over the course of time.

The mound was discovered in 1796, when the workmen of a local zamindar, the Raja of Chintapalli, stumbled upon the ruins. A year later, Colin Mackenzie, a British army officer, came upon the site and became the first to document the stupa. Subsequently Archaeologists like Mr. Burgess, Sir Walter Elliot, Sri T.N. Ramachandran, Mr. Rea, R. Subrahmanyam, K. Krishna Murthi and I. Karathikeya Sarma have worked on it.

Also known as Deepaladinne, the great stupa at Amaravati was one of the biggest in Andhra Pradesh with a probable diameter of 50 m and a height of 27 m. It has a brick built circular vedika or drum with projecting rectangular Ayaka platforms in four cardinal directions. Five Ayaka pillars must have stood on each platform symbolically representing the five main events in Buddha's life viz., the birth, the great renunciation, the enlightenment, the first sermon and the final extinction. The drum and Ayaka platforms were covered with sculptured slabs. All the four-Ayaka platforms have yielded seven crystal and one Ivory relic caskets, some of which contain bone-pieces, pearls, precious stones and gold flowers. This is a Sariraka type of stupa and hence it has a great importance.

A hemispherical dome is mounted on the circular drum. Tall sculptured dome slabs covered the vertical part of the dome, above which came decorations in stucco. Scenes from the life of Buddha, Jataka stories, animal motifs, and floral decorations formed the subject matter of these sculptures carved on the locally available light green limestone. The drum was crowned by a harmika or box like structure over which stood a chhatra or umbrella.

It was surrounded by a great railing made of tall pillars separated by crossbars and crowned by a high decorated coping. The railings were completely covered with narrative reliefs and elaborate decorations. At each of the cardinal points there was a gateway. Between the railing and the drum there was a circumambulatory passageway.

All of the sculptures have been removed from the site of the Mahachaitya, although a few broken pillars remain. Out of the vast sculptural wealth this stupa has yielded, a good number have become the objects of exhibition in the galleries of the British Museum in London, Musie Guimet in Germany, National Museum in New Delhi, Indian Museum in Calcutta, and Government Museum in Madras. The rest are on display in the site museum. 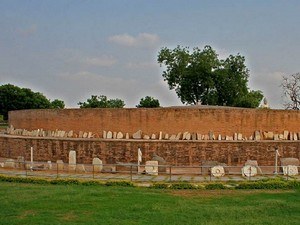 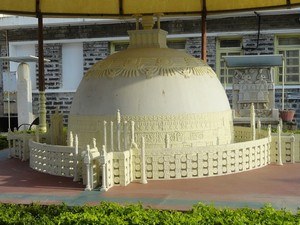 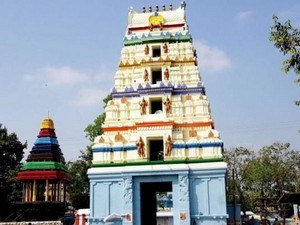 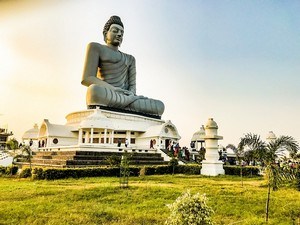