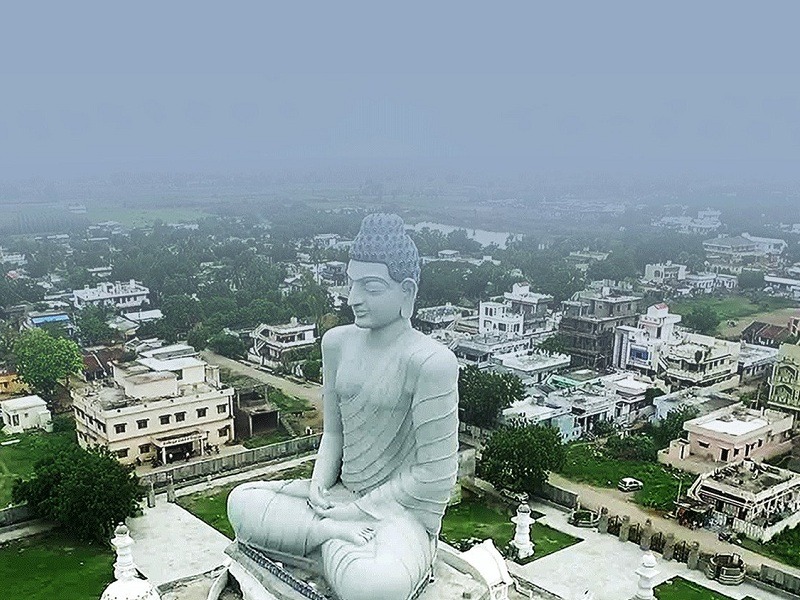 At a distance of 33 km from Guntur, 38 km from Vijayawada, 111 km from Machilipatnam, 162 km from Khammam, 178 km from Nalgonda, 178 km from Bhadrachalam, 194 km from Rajahmundry, 270 km from Nellore, 274 km from Hyderabad, 403 km from Vishakhapatnam, 450 km from Anantapur, Amaravati is a popular historical town situated on the southern bank of Krishna River in Guntur district of Andhra Pradesh. It is the new capital of Andhra Pradesh state and one of the popular pilgrimage sites for Hindus as well as Buddhists.

The town gets its name from Amareshwara or Amaravati temple, dedicated to Lord Shiva. The town has been mentioned in the Indian epics as Dhanyakataka and Andhranagari. It was also served as the capital of the Satavahanas, who ruled Andhra Pradesh from the 2nd century BCE to the 3rd century CE. Later it was ruled by several major dynasties like Andhra Ikshvakus, the Pallavas, the Cholas, the Kakatiyas, the Delhi Sultanate, Musunuri Nayaks, Bahmani Sultanate, Vijayanagara Empire, Sultanate of Golconda and Mughal Empire successively before the founding of the Nizam of Hyderabad in 1724. It was ceded to France in 1750 but was captured by England in 1759. It was briefly captured by Hyder Ali, but remained under British rule for the majority of time since the 1780s. Amaravati is currently the de-facto capital of the state of Andhra Pradesh, following its bifurcation from Telangana in 2014.

Amaravathi has gathered attention from all over the world because of the Amareshwara Temple that is situated here. Amaravathi is also famous for being the site of the one of the greatest Buddhist Stupas ever built. This stupa is believed to have been built during the reign of Emperor Ashoka (269-232 BC) under Mauryan Empire. It was in Amaravati that Lord Buddha preached and conducted the ceremony of Kalachakra. The proof of all this exists in the text of Vajrayana, which historically establishes the fact that Amaravati, was much in existence even during the 500 BCE. Amaravati Archaeological Museum, Mangalagiri Temple, Amaravati Mahachaitya, Undavalli Caves, and Kondaveedu Fort are some of the popular places to visit in Amaravati.

Vijayawada International Airport is the nearest airport which is about 59 km from Amaravati. It has well flight connectivity with Mumbai, New Delhi, Hyderabad, Bangalore, Chennai, and Vishakhapatnam. Vijayawada Junction, about 38 km, is the nearest railhead to Amaravati which has well rail connectivity with Puri, Vishakhapatnam, Kamakhya, Chennai, Coimbatore, Sambalpur, Lucknow, Bhubaneswar, Bilaspur, Tirupati, Karimnagar, Dharmavaram, Hyderabad, Raichur, Jaipur, Puducherry, Mumbai, Tirunelveli, Kochi, Pune, Bidar, Howrah, Hubbli, Bangalore, Machilipatnam, Thiruvananthapuram, Ajmer, Patna, Delhi, Jabalpur, Patliputra, Dibrugarh, Rajahmundry, Guntur, Purulia, and Agartala. From Vijayawada, one can either hire a taxi or opt for a bus to reach Amaravati. Amaravati is well-connected by bus with Guntur, and Vijayawada while Vijayawada Bus Station is the major bus station to Amaravati which has direct bus connectivity with all major towns and cities of Andhra Pradesh and Telangana.

Amaravathi experiences a tropical climate, with hot summers and mild winters. The best time for a visit to Amaravathi is in the winters, especially the months from October to March when the climate is pleasant and the ambience is lovely. The summers are unbearably hot, and the monsoons, although lovely and inviting, might dampen your plans if the rainfall is more than normal.

How to Reach Amaravati - Full Details

Top 10 Places to Visit in Amaravati

#1 of 6 Places to Visit in Amaravati

At a distance of 1 km from Amaravati Bus Station, Amaravati Stupa is a ruined Buddhist monument located in Amaravati, Andhra Pradesh. Popularly known as Mahachaitya or Great Stupa of Amaravati, it is one of the largest stupas in India and among the must visit places in Amaravati.

The great Buddhist Stupa or Mahachaitya of Amaravati is one of the greatest architectural achievements of ancient India. It was founded in the 3rd-2nd centuries BC during Ashoka Maurya' reign and enlarged in the 1st-4th centuries AD under the Satavahana and Ikshvaku patronage. It was a center of religious activities till the 14th century AD. Eventually, it fell into disuse and was rendered invisible by being covered in dust and debris over the course of time.

The mound was discovered in 1796, when the workmen of a local zamindar, the Raja of Chintapalli, stumbled upon the ruins. A year later, Colin Mackenzie, a British army officer, came upon the site and became the first to document the stupa. Subsequently .....

#2 of 6 Places to Visit in Amaravati

At a distance of 500 m from Mahachaitya and 1 km from Amaravati Bus Stand, Amaravati Museum is an archeological museum situated in Amaravati, the de-facto capital of Andhra Pradesh, India. Just opposite to Amaravati Stupa, it is one of the popular museums in Andhra and among the top places to visit in Amaravati as part of Vijayawada Tour Packages.

Maintained by ASI, the Amaravati Museum is an amazing repository of relics that have been gathered from the ruins of this 2000 year old Buddhist settlement as well as from nearby places. These artefacts belong to the period 3rd century BC to 12th century AD exhibit in three different galleries. The ancient and complex art work done by the craftsmen of that period are displayed in the first gallery. The Purnakumbha designs and the Lotus designs here express the intricate art of those days. The two drums of slab depicting the Stupas, Swastika mark on the cushioned seat of the throne under the Bodhi tree, the Agni Skanda (Flaming pillar), the .....

#3 of 6 Places to Visit in Amaravati

At a distance of 1.5 km from Amaravati Bus Station, Amareswara Temple is a Hindu temple situated on the bank of Krishna River in Amaravati, Andhra Pradesh. Also called as Amaralingeswara Swamy Temple, it is one of the well-known places of pilgrimage in Andhra Pradesh and among the popular places to visit in Amaravati.

Dedicated to Lord Shiva, Amaralingeswara Temple is regarded as one of the Pancharama Kshetras of Lord Shiva. The other four places are Draksharama, Kumararama at Kotipalli, Bheemarama at Samalkota and Ksheerarama at Palakollu. Legend has it that when Subramanya killed the demon Tarakasura, the Shivalingam in his throat broke and fell in five different spots, which became the Pancharama kshetras. It is believed that the sacred Shivalinga of Amareswara Swamy Temple was installed by Lord Indra himself.

Though the origin of the temple is shrouded in the Puranas, the temple was renovated and expanded by Vasireddy Venkatadri Naidu, who was the zamindar of Chintapalli .....

#4 of 6 Places to Visit in Amaravati

At a distance of 2 km from Amaravati Bus Station, the Dhyana Buddha is a statue of Lord Buddha situated in Amaravati, Andhra Pradesh. It is one of the tallest Buddha statues in India and among the most important places to visit in Amaravati.

Standing tall at a height of 125 feet, the statue of Dhyana Buddha was commissioned in 2003 and completed in 2015. The statue is situated in 4.5 acre scenic locale on the bank of Krishna River. Made out of concrete and stone, this giant statue was sculpted by R. Mallikarjuna Rao, the Joint Director of Social Welfare, Guntur. The statue was designed by incorporating features from all the 50 types of Buddhist sculptures from 145 major heritage sites all over India.

The statue is in meditating posture while he is seated on a giant lotus supported by eight pillars symbolizing the Buddha's eight fold path to attain salvation. The area is divided into four zones depicting the four noble truths. The five ayaka pillars made of sand stone symbolize .....

#5 of 6 Places to Visit in Amaravati

At a distance of 32 km from Guntur, 58 km from Amaravati and 73 km from Vijayawada, Kondaveedu Fort is an ancient hill fortress located at Kondaveedu village in Guntur district of Andhra Pradesh. It is one of the historical forts in Andhra Pradesh and among the famous Amaravati Tourist Places.

Kondaveedu Fort was constructed during the time of Telugu Chodas, strengthened by Kakatiyas and occupied by Prolaya Vema Reddy who shifted his capital from Addanki to Kondaveedu in 1323 AD. Later it was taken over by Gajpathis of Orissa and ravaged by the Bahmani Sultans in 1458. The Vijayanagara emperor Krishnadevaraya captured it in 1516. The Golconda Sultans fought for the fort in 1531, 1536 and 1579, and Sultan Quli Qutb Shah finally captured it in 1579, renaming it as Murtuzanagar. Later it was recaptured by the Mughal army of Aurangzeb in 1687 and the fort came under the control of the French colonists in 1752 when it was extensively fortified. It passed on to the English imperialists .....

#6 of 6 Places to Visit in Amaravati

At a distance of 37 km from Guntur, 273 km from Hyderabad, 354 km from Vizag, 453 km from Chennai and 643 km from Bangalore, Vijayawada, also known as Bezawada, is the second largest city in Andhra Pradesh State and also one of the top Places to visit in Andhra Pradesh. It is located on the banks of the Krishna River to the South, Budameru River on the north and the Indrakiladri Hills on the west. This is the largest railway junction of the South Central Railway, situated along the Chennai-Howrah and Chennai-Delhi rail route.

Legend says that Goddess Durga took rest in this sacred place after destroying a Rakshasa and since then the name 'Land of Victory' or Vijayawada came into existence. The discovery of Stone Age artifacts along the banks of River Krishna from Machilipatnam to Nagarjuna Sagar indicates that this area was inhabited long before. The Chalukyas once conquered this place and it was .....