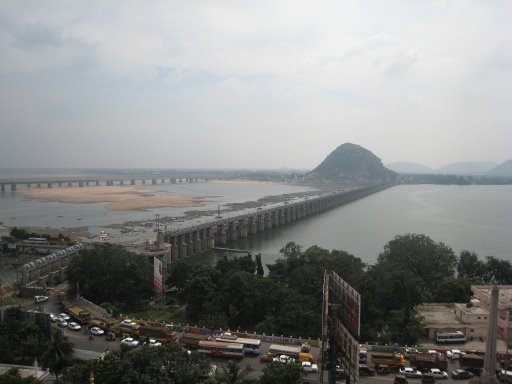 At a distance of 37 km from Guntur, 273 km from Hyderabad, 354 km from Vizag, 453 km from Chennai and 643 km from Bangalore, Vijayawada, also known as Bezawada, is the second largest city in Andhra Pradesh State and also one of the top Places to visit in Andhra Pradesh. It is located on the banks of the Krishna River to the South, Budameru River on the north and the Indrakiladri Hills on the west. This is the largest railway junction of the South Central Railway, situated along the Chennai-Howrah and Chennai-Delhi rail route.

Legend says that Goddess Durga took rest in this sacred place after destroying a Rakshasa and since then the name 'Land of Victory' or Vijayawada came into existence. The discovery of Stone Age artifacts along the banks of River Krishna from Machilipatnam to Nagarjuna Sagar indicates that this area was inhabited long before. The Chalukyas once conquered this place and it was later part of Vengi Kindom, Eastern Gangas, Vijayanagaras and Reddy Dynasty. Finally it came under British Madras presidency.

The major attractions of Vijayawada are Kanaka Durga temple and Mangalagiri temple. Apart from these, other tourist attractions include Prakasham Barrage, Gandhi Hill, Mogalarajapuram Caves, Victoria Museum, Hazarat Bal Mosque, Rajiv Gandhi Park and Bhavani Island. The Kondapalli Reserve Forest in the western outskirts that sprawls over an area of 121.5 sq. km is also another attraction. This forest is a source of soft wood that is used for making Kondapalli Toys. There are popular Buddhist sites such as Amravati, Gudivada, Ghantasala, etc.

The Krishna Pushkaram is a popular festival here that is held once in every twelve years. Apart from this the other common festivals celebrated here includes Diwali, Dussehra and Makara Sankranthi.

The Vijayawada airport is located at a distance of around 20 km from the city, at Gannavaram. It has flight to Hyderabad, Visakhapatnam, Bangalore, Coimbatore and Delhi. The Vijayawada railway station is connected to several major cities of India like Chennai, Trivandrum, Bangalore, Hyderabad, Kochi, Bhubaneswar, Mumbai, Gandhinagar, Jaipur, Bhopal, Luknow, Jammu, Bilaspur, Pondicherry, New Delhi, Kolkata, Varanasi, Patna and Chandigarh. Vijayawada is also well connected by all the major towns and cities in Andhra Pradesh. It has regular buses from Chennai, Tirupati, Bangalore, Hyderabad and Vizag.

How to Reach Vijayawada - Full Details

Top 10 Places to Visit in Vijayawada

#1 of 27 Places to Visit in Vijayawada

At a distance of 4 km from Vijayawada Railway Station, Kanaka Durga Temple is located on the Indrakeeladri hill on the banks of Krishna River in Vijayawada. Kanaka Durga, the goddess of power and riches is considered the presiding deity of Vijayawada. It is one of the famous temples in South India. The shrine also called Sri Durga Malleswara Swami Temple dates back to the 8th century.

According to legend, goddess Durga killed demon Mahishasura and enshrined on the Keela Mountain with eight arms in the form of Mahishasura Mardini as she had given boon to Keela. Indra and all other gods worshipped the goddess Kanaka Durga on the hill which later known as Indrakeeladri. In Dwaapara Yuga, Arjuna did great penance on Indrakeeladri for Lord Shiva in order to get the most powerful Astra called Paashupataastra. Later, Lord Shiva appeared to fulfill the desire of Arjuna and called him as Vijaya (victorious). The place came to be known as Vijayawada after Arjuna's victory.

#2 of 27 Places to Visit in Vijayawada

At a distance of 3 Kms from Vijayawada Railway Station, the Bhavani Island is situated upstream of River Krishna, close to the Prakasam Barrage.

The total area of the island is about 133acres. The island has extensive forest coverage, shimmering ponds and rolling meadows.

#3 of 27 Places to Visit in Vijayawada

At a distance of 2 km from Vijayawada Railway Station, Prakasam Barrage is a 1223.5 meter long modern regulator and Road Bridge built across the River Krishna and is located at the southern entrance of Vijayawada.

The beautiful backwaters formed by the barrage give the city a unique setting with the backdrop of Kanakadurga Hill. The barrage was first built by Sir Arthur Cotton in 1855 and later reconstructed in the 1950s. This is one of the earliest major irrigation projects in Southern India. It was named after the first Chief Minister of Andhra Pradesh, Tanguturi Prakasam. The scheme irrigates nearly one million hectors of land, converting the Krishna delta into a rich granary in Andhra Pradesh. This barrage also supplies water to Buckingham canal which was constructed as inland navigation canal initially but later used as irrigation water supply canal.

The idea of constructing a dam across the river Krishna dates back to 1798. It began .....

#4 of 27 Places to Visit in Vijayawada

At a distance of 6.5 km from Vijayawada Railway Station, 30 km from Guntur and 275 km from Hyderabad, The Undavalli Caves, a monolithic example of Indian rock-cut architecture, are located in Undavalli Village of Guntur district in Andhra Pradesh.

The Undavalli Caves are ancient cave temples believed to be built between 4th and 5th centuries by Gupta dynasty. The caves are located on a hill overlooking the Krishna River. These caves have been carved out of solid sandstone on a hillside. The best known and largest one has four stories with a huge statue of Lord Vishnu in a reclining posture sculpted from a single block of granite in the second floor. Other shrines inside the cave are dedicated to Trimurti- Brahma, Vishnu and Shiva. Main cave belongs to the earliest examples of Gupta architecture, primarily primitive rock-cut monastery cells carved into the sandstone hills. Initially caves were shaped as a Buddhist monastery and the first floor .....

#5 of 27 Places to Visit in Vijayawada

At a distance of 24 km from Vijayawada Railway Station & 262 km from Hyderabad, Kondapalli Fort, also known as Kondapalli Kota, is located at Kondapalli Village in the Krishna district close to Vijayawada.

This 14th century Fort is believed to have been built by the Reddy King of Kondaveedu, Prolaya Vema Reddy. Spread over an area of 18 sq.km, this Fort is said to have served as a recreational palace for the king. The Fort was also used as a business centre. Later, the fort went into the hands of Gajapati rulers of Orissa. In the year 1520 AD the King, Sri Krishna Devaraya of Vijayanagara Empire has captured the Kondapalli fort in Kalinga wars. Later, the fort came into the hands of Qutubshahi Kings in the 16th century. During the colonial rule, the British soldiers were given training in this fort.

Situated on a hill, the fort has an impressive three storied rock tower protected by three levels of entries. The main entrance gate is known as the Dargah Darwaza, which has .....

#6 of 27 Places to Visit in Vijayawada

At a distance of 9 km from Bapatla, 28 km from Vodarevu Beach, 92 km from Vijayawada and 61 km from Guntur, Suryalanka Beach is situated in Guntur District of Andhra Pradesh. Also known as Bapatla Beach, it draws a large number of visitors on weekends and holidays.

This beach is quite safe for swimming and sunbathing is another popular activity. Sunrise is very beautiful at this beach. The major tourist attraction of the beach is the sightseeing for dolphins in the month of November.

#7 of 27 Places to Visit in Vijayawada

At a distance of 8 km from Chirala, 28 km from Suryalanka Beach, 103 km from Vijayawada and 72 km from Guntur, Vodarevu Beach is located on the coastline of Bay of Bengal. It is situated 6 km from the Ramapuram Beach in Prakasam district.

Vodarevu beach is popular and one of the most visited beach around Vijayawada. This Beach is a beautiful beach with a constant inflow of tourists spending their weekends in serene settings. The tranquil setting of the beach can make visitors forget time and the beautiful sunsets and sunrises just add to the overall charm and attraction of the beach.

The Vodarevu Beach provides adventure in the form of exciting water-sports, swimming and fishing. Local boats are available which facilitate boating in the sea. There is also a light house nearby which can be visited.

There are several accommodation facilities near Vodarevu beach. The Sip and Dip Cottages, situated on the Vodarevu Beach Road is equipped with all basic amenities. Also, the .....

#8 of 27 Places to Visit in Vijayawada

At a distance of 95 Kms from Vijayawada & 349 Kms from Hyderabad, Kolleru Lake is a large freshwater lake spread over an area of 300 Sq. Miles between Krishna and Godavari delta. It is home to migratory birds between October and March every year.

The lake is approachable from all four sides of the lake by road: Atapaka - 2.5 Kms from Kaikaluru & 25 Kms from Eluru, Murthiraju Tank - 8 kms from Nidamarru & 45 Kms from Eluru, Gudivakalanka - 15 kms from Eluru. Watchtowers are available at these places for bird watching. Eluru is connected by frequent buses from Vijayawada .....

#9 of 27 Places to Visit in Vijayawada

At a distance of 83 Kms from Vijayawada, 11 Kms from Machilipatnam & 351 Kms from Hyderabad, the Manginapudi Beach is scenic beach on Bay of Bengal. A unique feature of this beach is that it has black soil instead of the sand like other beaches.

On the occasion of Magha Poornima lakhs of pilgrims gather here to take a holy dip in the sea. An old light house is one of the added attractions. A number of beach resorts are coming up to cater to the tourist crowd. On the banks of the sea coast, Dattashram is an ancient pilgrimage site comprising a temple of Lord Shiva. Owing to the sanctification of 9 wells of bath, like Rameswaram, Manginapudi is also known as Datta Rameswaram.

Several buses are available to Manginapudi from Vijayawada and Machilipatnam.

At a distance of 6 Kms from Vijayawada Railway Station, Gundala Church also known as St. Mary's Church or Gundala Meri Matha Church is located on top of Gundala Hill.

As per records, Reverend Arlati who was the then rector of St Mary's Church established a beautiful sculpture of Our Lady at this place in 1825 and the church was later constructed. Irrespective of caste, creed and religion, people visit this shrine and receive the blessing.

An annual event of Feast of Our Lady of Lourdes is held in the month of February that attracts thousands of devotees. A colorful fair takes place during this festival.