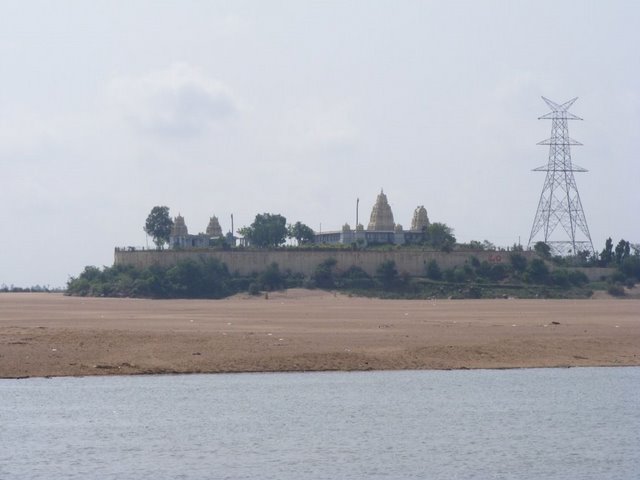 #2 of 2 Places to Visit in Papikondalu

Travel Tips: This can be visited while going to Papikondalu from Rajahmundry.

At a distance of 35 km from Rajahmundry & 30 km from Papikondalu, Pattisam, also known as Pattiseema, is a beautiful place located on the banks of river Godavari in West Godavari district of Andhra Pradesh. It is situated between Rajahmundry and Papikondalu and can be reached by road and boat from Rajahmundry. There are two temples in Pattisam, Sri Veerabhadra Swamy, dedicated to Lord Shiva and Sri Bhava Narayana Swamy dedicated to Lord Vishnu. This temple is one of the Panchakasi Kshetras. The other four temples are at Kedarnath, Kashi, Kalahasti and Srisailam.

Sri Veerabhadra Swamy or Sri Veereswara Swamy Temple is located on Devakuta Hill in the middle of the River Godavari. The temple was bulit by Cholas in 11th Century AD and it was reconstructed by Raja Kocherlakota Jaggaiah in 19th Century. He donated 1900 acres of land to this temple and his descendants still patronize this temple.

According to legend, Pattiseema is considered the place where the sword (Pattisam in Telugu) of Lord Shiva had fallen after killing Dhaksha. Veerabhadra is born out of the lock of Shiva's hair during his tandava performance on sighting his wife Sati Devi getting burnt in the fire of the yagna conducted by Dhaksha. After killing Dhaksha, Lord Veerabhadra still continued with his pralaya tandava. All the deities requested Sage Agastya to pacify Lord Veerabhadra. Then Agastya approached Lord Veerabhadra and embraced him with both his hands, collected the unbraided long hair and tied it into a knot and requested him to settle down on the hillock of Devakuta. Then Lord Veerabhadra agreed to stay on the hillock in the form of Swayambhu Shiva Linga.

The presiding deity of the temple is Lord Shiva in the form of Lord Veerabhara Swamy. The Shivalinga is a big one, measuring about 8 feet high. The walls of the temple are adorned with carved scenes from Purana. A life-size sculpture of Devi Bhadrakali adorned with several ornaments and a sword.

Sri Bhava Narayana Swamy Temple dedicated to Lord Vishnu is a large structure with fine sculptures. It was built in the 11th century by the feudal lord Nalaparaju who ruled over Avuku, and Emperor Kulothunga Chola added several sections including rare sculptures. There are temples for Rajyalakshmi, Lakshmi Narasimhaswamy and Anjaneyaswamy are situated in front of the temple gate.

One has to take a boat to reach the island from Pattisam village and walk in the sandy stretch for 10 minutes to reach the temple. Many Telugu films are shot in the surroundings of Pattisam.

The main festival of Lord Shiva is Mahasivaratri which is celebrated annually. On these days approximately 1 lakh pilgrims visit this temple. The other important festivals are the Kalyanam of Lord Shiva on Bheeshma ekadashi, Karteeka masam and Bhava Narayana Kalyanam.

0 Must Visit Places in Papikondalu

Places to Visit in Papikondalu