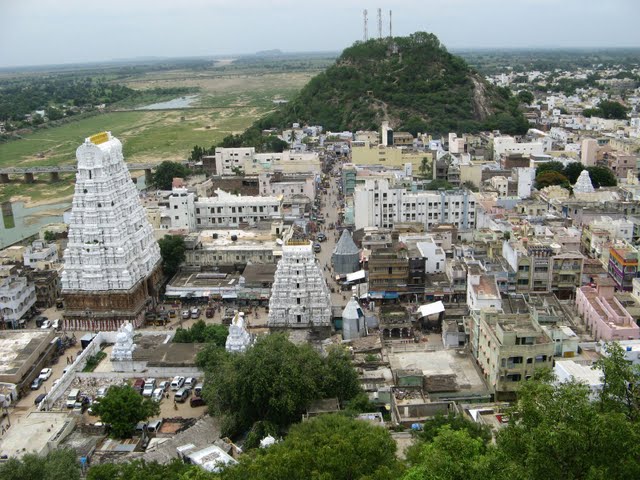 Peak Season: November & February to May

At a distance of 37 km from Tirupati, 113 km from Chennai, 291 km from Bangalore, 375 km from Vijayawada and 552 km from Hyderabad, Srikalahasti, popularly known as Kalahasti is one of the ancient and most important Shiva Kshetras situated in Chittoor district of Andhra Pradesh. Srikalahasti is famous for Srikalahasteeswara Temple (referred as Srikalahasti Temple) built in 10th century. The entire temple was carved out of the side of a huge stone hill. Srikalahasti is among ideal weekend getaways from Chennai city for a two day trip and also one of the top places to experience AP Tourism.

Srikalahasti got its name from three words - 'Sri' meaning a spider, 'Kala' meaning a serpent and Hasti meaning an elephant, as these three creatures are believed to have worshipped Lord Shiva at this place and attained salvation. It is located on the banks of the River Swarnamukhi, which is a tributary to River Pennar, one of the major rivers in South India. The ancient Shiva temple of Srikalahasti finds reference in the three ancient epics the Skanda Purana, Shiva Purana and the Linga Purana. According to Skanda Purana Arjuna came to this place to worship Kalahasteeswara (Lord Shiva) and met Rishi Bharadwaja on the peak of a hill.

The temple of Kalahasteeswara is one of the most impressive Siva temples in India. This temple features 120 feet high enormous and ancient gopuram over the main gate. The entire temple is carved out of the side of a huge stone hill. The initial structure of this temple was constructed by Pallava kings in the 5th century. Chola kings renovated the temple and constructed the main structure in 10th century. The outer walls and the 4 gopurams were constructed in the period of Sri Veera Narasimharayar of Vijayanagara kingdom. The main gopuram and the 100 pillar mandapam were constructed by Krishna devaraya, the great Vijayanagara king in 1516.

Sri kalahasti is regarded as one of the Pancha Bhoota Sthalams of Lord Shiva; the other four includes Tiruvannamalai, Thiruvanaikaval, Chidambaram and Kanchipuram. The place is representative of the Vayu Sthalam or the Element of Air. This temple is also associated with Rahu and Ketu, two of the nine celestial bodies in the Indian astrological scheme. It is believed that a visit to this temple will provide relief to those who have the planet Rahu in inimical positions in their horoscopes.

This small town is dotted with many small and big temples; most of which were constructed during the reign of Pallava, Chola and Vijayanagara kings. Srikalahasti is associated with Bhakta Kannappa, one of the greatest devotees of Lord Shiva how offered his eyes to the lord. The festival of Maha Shivaratri is celebrated with great zeal in February to March.

How to Reach Srikalahasti - Full Details

Top 10 Places to Visit in Srikalahasti

#1 of 12 Places to Visit in Srikalahasti

At a distance of 2 km from Srikalahasti Bus Station, Srikalahasteeswara Temple (referred as Srikalahasti Temple) is one of the famous Shiva temples in South India. It is said to be the site where Kannappa, a great devotee of Shiva, was ready to offer both his eyes to cover blood flowing from the Siva linga before the Lord Siva stopped him and granted mukti.

The ancient Shiva temple of Sri Kalahasti finds reference in the three ancient epics the Skanda Purana, Shiva Purana and the Linga Purana. According to Skanda Purana, Arjuna came to this place to worship Kalahastheeswara (Lord Shiva) and met Rishi Bharadwaja on the peak of a hill.

This temple is one of the most impressive Siva temples in South India. This temple features 120 feet high enormous and ancient gopura over the main gate. The entire temple is carved out of the side of a huge stone hill. The initial structure of this temple was constructed by Pallava dynasty in .....

#2 of 12 Places to Visit in Srikalahasti

At a distance of 2 Kms from Srikalahasti Bus Station, Swarnamukhi River is located near Srikalahasti Temple. When the hermits of Bilwaka grove pleaded with Sage Agastya on lack of water, he brought river Akash Ganga to the earth. As ordained by Lord Siva, Akash Ganga flowed as Swarnamukhi and sanctified the temple at Sri Kalahasti.

According to another legend, Lord Siva directed Sage Vashishta to proceed, along with Arundhati. Sage Vashishta finding that there was no water in the vicinity undertook a penance invoking Lord Brahma. Lord Brahma approached Lord Siva and told him about the cause of Sage Vashishta's penance. Thereupon Lord Siva unlocked Ganga from his matted hair and allowed her to follow Brahma. Gangadevi sparkling in golden hue rushed to the place where Sage Vashishta lived. Thus, the river here got its name Suvarnamukhi.

#3 of 12 Places to Visit in Srikalahasti

At a distance of 2 Kms from Srikalahasti Bus Station, Pathala Vinayaka Temple here is situated at the northern entrance of Srikalahasti Temple at a depth of 35 feet.

There is a legend that talks about Vinayaka's manifestation deep in the Suvarnamukhi River. According to the legend, Suvarnamukhi River dried up once because Sage Agastya did not worship Lord Vinayaka when he came to Dakshin Kailash. Realizing his mistake, the Sage worshipped and obtained Lord Vinayaka's blessings. As the image of the Lord appeared at bottom of the riverbed, the image came to be known as Pathala Vinayaka. This shrine can be found close to the northern Gopuram of Sri Kalahsthiswara Temple. It can be reached by descending a plight of 20 steps.

#4 of 12 Places to Visit in Srikalahasti

At a distance of 2 Kms from Srikalahasti Bus Station, Bharadwaja Tirtham is a tank situated to the east of Srikalahasti Temple. This place is amidst three hills and well known for its scenic beauty. The Thapo Vinayaka idol situated in the middle of the tank is a special attraction here.

To the south of the temple, on top of a hill there is a shrine for Panchamukheswara with few good sculptures. Maharishi Bharadwaja is said to have meditated here in the Krtha Yuga.

#5 of 12 Places to Visit in Srikalahasti

At a distance of 29 km from Tada, 45 km from Srikalahasti, 85 km from Tirupati, 92 km from Chennai, 130 km from Nellore and 156 km from Chittoor, Tada falls or Ubbalamadugu Falls is situated in Varadaiahpalem mandal of Chittoor district. It is situated on the border of Tamil Nadu and Andhra Pradesh and is an ideal place for trekking near Chennai for a day trip.

The falls are located in a dense forest called Siddulaiah Kona. The falls are located within the Kambakam hills and are a popular destination for trekking, climbing and picnicking. The terrain that surrounds the falls includes rocky hill formations and lush forests interspersed with a number of streams.

To reach the falls visitors have go through the Varadaiahpalem village, about 12 km from Tada falls. There is only 7 km rugged path and the remaining distance has to be trekked through. SUVs or vehicles with high ground clearance are best suited to reach the trekking .....

#6 of 12 Places to Visit in Srikalahasti

At a distance of 9 from Sullurpet, 50 km from Srikalahasti, 105 km from Nellore & 88 km from Chennai Central Railway Station, Pulicat Lake is the second largest brackish water lake in India, after Orissa's Chilka Lake. It lies at the border of Thiruvallur district in Tamil Nadu and Nellore district in Andhra Pradesh states. The island of Sriharikota (home for famous ISRO) separates the lake from the Bay of Bengal. This is one of the popular tourist places to visit near Chennai and an ideal weekend getaway near Chennai.

The sanctuary is home to wide range of migratory birds that migrate in large numbers in winter. It is one of the best places for bird watching in the vicinity of Chennai city and at the same time experience the memorable boat riding in Pulicat Lake. The entrance to the sanctuary is situated .....

#7 of 12 Places to Visit in Srikalahasti

At a distance of 2 Kms from Sri Kalahasti Bus Station, Kannappa Temple is situated on the south hill near main Srikalahasti Temple. This is the shrine of Kannabeswara, built in the memory of Sage Kannappa, who offered an eye to Lord Shiva. When he tried to offer his other eye as well, the Lord mercifully stopped him.

Chaturmukeswaram Temple can be also found here as a linga with four faces. Timings: 6 AM to 6:30 PM.

#8 of 12 Places to Visit in Srikalahasti

At a distance of 2 Kms from SriKalahasthi Bus Station, Sri Prasanna Varadaraja Swami Temple is situated in center of the town.

#9 of 12 Places to Visit in Srikalahasti

At a distance of 7 Kms from SriKalahasthi, the Veyilingala Kona Waterfalls is a nice place in a close proximity of Srikalahasti. This place usually becomes lonely by 5 PM.

There is a temple Thousand Lingas, a single linga inscribed with 1000 miniature lings. Temple Timings: 8 AM to 6 PM.

Autos can be hired from Srikalahasti to reach this place.

#10 of 12 Places to Visit in Srikalahasti

At a distance of 71 km from Chittoor, 413 km from Vijayawada, 556 km from Hyderabad, 763 km from Vizag, 134 km from Chennai and 259 km from Bangalore, Tirupati is a pilgrimage city in the extreme southeast of Andhra Pradesh in Chittoor district. It is often referred as a synonym to Tirumala (called as Tirumala Tirupati), which is a sacred temple town famous for Sri Venkateswara Temple also known as Tirumala Tirupati Balaji Temple. Tirupati along with Chandragiri is an ideal Chennai getaways for a two day trip and also one of the top Andhra Pradesh tourist places.

Tirupati is one of the most ancient and sacred pilgrimage sites in India. Tirumala, the home of Lord Venkateswara is at a distance of 22 km from Tirupati. However, Tirupati is the town and transport hub to Tirumala at the bottom of the hill. The initial .....