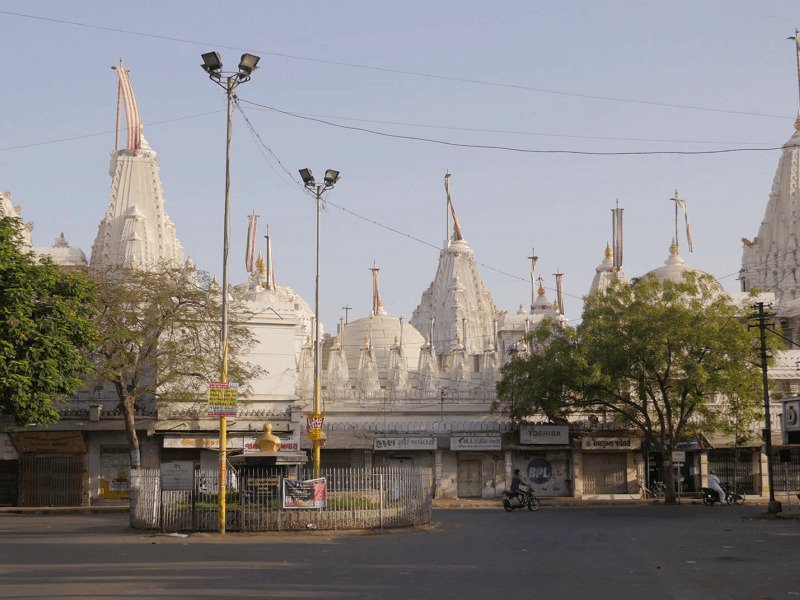 At a distance of 5 km from Jamnagar Railway Station, the Jain Temple complex is a cluster of four Jain temples situated in Chandi Bazaar area of Jamnagar. The complex is one of the popular places of pilgrimage for Jains and among the prominent places to visit in Jamnagar.

The four Jan temples in the complex are dedicated to various thirthankaras of Jain Sect. These temples form the centerpiece of the old city with its lovely buildings of wood and stone, adorned with pastel colored shutters and wooden balconies. The area around these temples is called Chandi Bazaar, meaning Silver Market, full of silver and gold jewel makers.

Built between 1574 and 1622, the most intricate of the complex is Raisi Shah Temple dedicated to the 16th tirthankar, Shantinath. Also known as Shantinath Temple, it has mirrored domes, coloured columns, and intricate carving. The walls of Shantinath Mandir are richly decorated with fine frescos as well as other wall paintings (murals), which depict the lives of various Tirthankaras. The floor is made of marble and is decorated with distinctive Jain patterns in yellow, black, white and red.

Next is the Vardhman Shah temple, dedicated to Adinath, the 1st thirthankar of Jainism. Also known as Adinath Jain Temple, it is a simple structure compared to Shantinath Temple, but more vibrant in color. The foundation stone of this shrine was laid in 1612, during the reign of Jam Jasaji I, and it was completed in the year 1620. The temple is surrounded by 52 small temples or Deri, which were built in the year 1622. The third temple is Sheth's Temple which was built by Bhansali Abji in the year 1594 AD. The last temple in the complex is Vasupujya Swami Temple and is believed to be built by Aaskaran Shah in the 17th century. 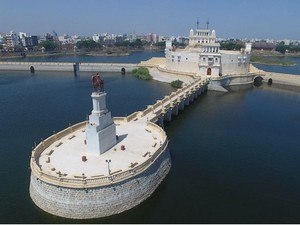 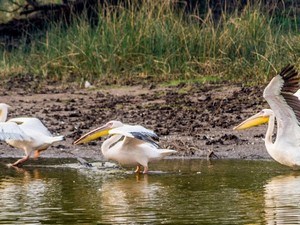