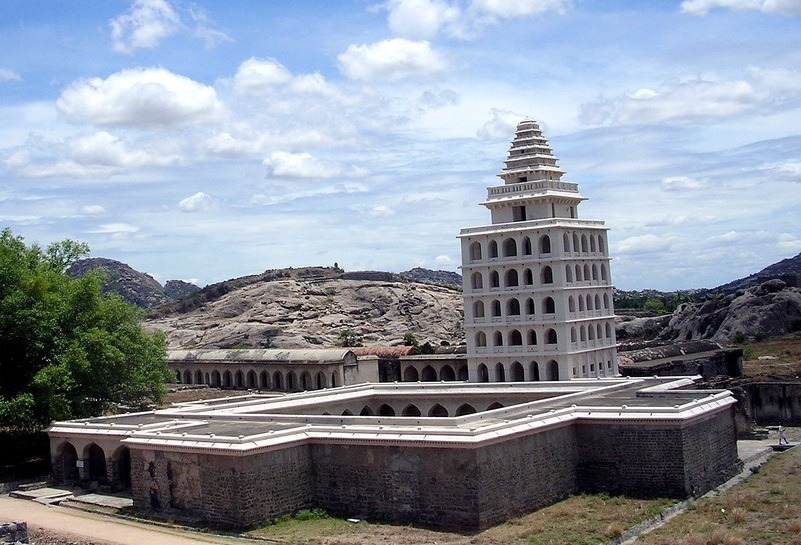 Travel Tips: The fort and monuments demand good amount of walking and trekking for about 2-3 hours. This is an ideal getaway from Chennai to spend full day.

At a distance of 2 km from Gingee Bus Stand, 71 km from Puducherry, 85 km from Kanchipuram, and 93 km from Vellore, Gingee Fort or Senji Fort is an ancient hill-fort sitated in the Villupuram district of Tamilnadu. It is one of the largest surviving forts in Tamilnadu, and among the popular historical places to visit near Chennai.

The fort was historically considered most impregnable and it was called the 'Troy of the East' by the British. Originally the site had a small fort built by the Chola dynasty during the 9th century. Gingee Fort, also known as Shinji or Jinji, was modified by Kurumbar while fighting the Cholas and again by the Vijayanagara Empire during the 13th century. As per one account, the fort was built during the 15-16th century by the Gingee Nayaks, the lieutenants of the Vijayanagara Empire and who later became independent kings. The fort passed to the Marathas under the leadership of Shivaji in 1677 AD, the Mughals, Carnatic Nawabs, French, and the British in 1761. It is one of the must visit places as part of Vellore holiday packages for history buffs.

The Gingee Fort complex is spread on three hillocks, Krishnagiri to the north, Rajagiri to the west, and Chandrayandurg to the southeast. The three hills together constitute the fort complex, each having a separate and self-contained citadel. The first hill, where the main fort is, is called Rajagiri. The fort walls are 13 km long and the hills are connected by walls enclosing an area of 11 sq. km. It was built at a height of 800 feet and protected by an 80 feet wide moat. One has to pass through a long flight of steps along the rocky hill track to explore the fort.

The complex has a seven-storey Kalyana Mandapa, granaries, prison cells, and a temple dedicated to its presiding Hindu goddess called Chenjiamman. The fortifications contain a sacred pond known as Aanaikulam. On the top of the hillock, there are few minor fortifications.

The Kalyana Mandapa is one of the most attractive monuments in the fort that is built in Indo-Islamic style. It consists of a square court, surrounded by rooms. In the middle of this court, there is a 27 m high square tower, built of stone. The tower has a pyramidal roof. On the western side of the Kalyana Mandapa, one can see a series of low vaulted and arched cells that are referred to as the Barracks and Stables, but now it has been converted into Archaeological Conservation Training camp.

Venkataraman Temple is located in the lower fort, the temple contains a remarkable sculpture depicting Lord Krishna playing on the flute. This is the largest temple in Gingee, which was built by Muthiah Nayaka in 1550 AD. Ranganathar Temple, bell tower, watchtower, cannon are located atop the Rajagiri hill.

The second important hillock with an imposing citadel is known as Krishnagiri. The Krishnagiri fort lies to the North of Tiruvannamalai road. It is smaller in size and elevation compared to the Rajagiri fort. A flight of steps carved on granite stones leads to its top. Another fort connected with Rajagiri with a low rocky ridge is called Chandrayana Durg or Chandragiri.