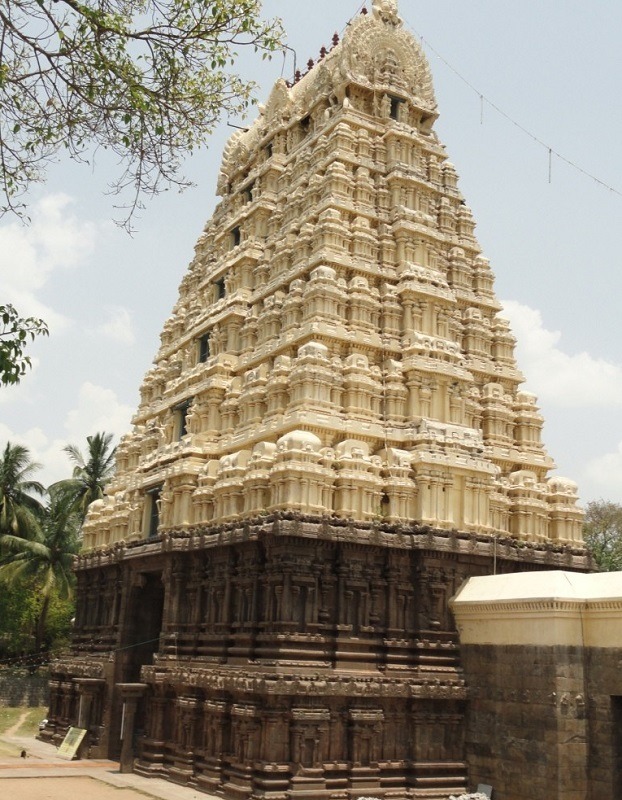 Travel Tips: This place is situated inside Vellore Fort and visited as part of the Fort tour

At a distance of 1.5 km from Vellore Town Railway Station, Jalakandeswarar Temple, dedicated to Lord Shiva is located inside the Vellore Fort. The temple is named Jalakandeswarar, as it is located at a lower height than the temple moat.

The temple has two courtyards and has a main shrine with a closed path around it and a number of sub-shrines. Inside the Garbha griha, main deity Jalakandeswarar is seen in the form of Shivalinga. Goddess Sri Akilandeswari Amman is seen in separate sanctum in the inner enclosure of the temple. To the outer walls of Amman sanctum one can get the darshan of Vinayaka, Madeswari, Vaishnavi, Varahi, Lakshmi and Saraswathi. There is also a Nandi statue in front, facing Sri Jalakandeswarar sanctum.

According to puranas, Athri muni installed a Siva Lingam in this place and worshiped. After he left, without proper maintenance the Siva Lingam in the temple was covered by an ant-hill. Rain waters in the lower levels of the ant-hill made a tank there. Lord Shiva appeared in the dream of a chieftain Bommi Reddy who was ruling the region and asked him to build a temple there. The king went to the tank, demolished the ant-hill and took out the Shivalinga and installed the Lord in the water itself.

The construction of the temple began in the year 1274 CE and continued for almost 50 years. The inner enclosure of the temple and the inner fort were built by the Sambuvaraya during the 14th century, while the sprawling outer enclosure, the exquisite kalyana mandapa and the vasantha mandapa were built during the reign of Vijayanagara king, Sadasivadeva Maharaya (1540 to 1572 CE).

The Jalakandeswarar Temple is a fine example of Vijayanagar architecture. The entrance of Jalakandeswarar is built with a long tower having large wooden gates and is sculptured with iron like lotus flowers. The kalyana mandapa located on the western side of the temple, which is a wonderful structure reflecting the finer aspects of the glorious Vijayanagara temple architecture. There are highly sculptured and adorned pillars at the main entrance. The engravings on the ceilings of the temple and the pillars are extremely exquisite.