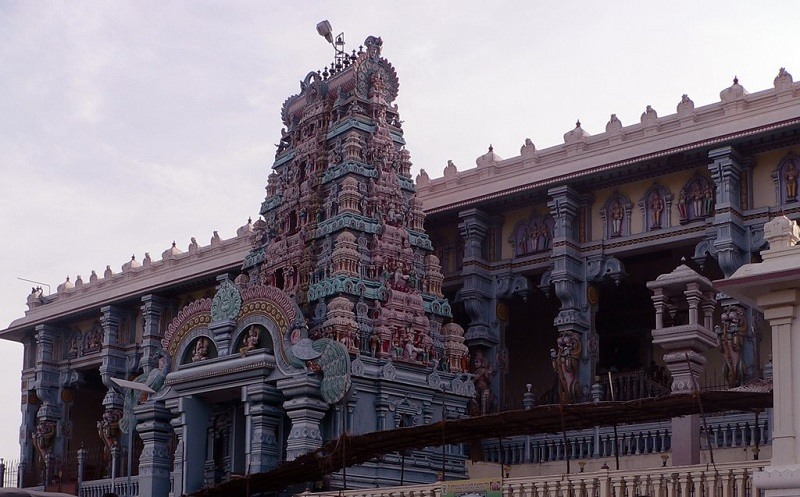 Travel Tips: Arcot is about 11 km from Ratnagiri and both places can be visited together

At a distance of 17 km from Vellore, Ratnagiri Balamurugan Temple is an ancient temple located on top of a hillock in Ratnagiri on Vellore - Chennai National Highway. It is one of the important places of pilgrimage in Tamilnadu, and among the must-visit places as part of Vellore tour.

The Ratnagiri Temple is dedicated to Lord Murugan. This temple was built in the 14th century by Arunagiri Nathar. It was renovated in the year 1980 by Bala Muruganadimai Swamy. The temple boasts a huge tower at the entrance. One of the special features of this temple is that the poojas are conducted in Tamil instead of common Sanskrit. The 14th Century poet Arunagirinathar has sung about this temple as Murugan, the God of Devas resides in Ratnagiri.

According to the locals, the divine power in the temple manifests its blessings in three forms. First is in the form of the Lord Murugan idol installed inside the sanctum, the second is in the form of Balamurugan and the third is in the form of a devotee. The idol of the main deity Bala Murugan was installed in a chariot that is made of granite. The garbhagriha is made of granite and is modeled according to the Chola architecture. The wall surrounding the shrine has small idols of Ganesha, Dakshinamurthy, Murugan, Brahma, Durga, and Chandikeswarar. There are 2 temples for Lord Vinayaka, one on top of the hill and another at the bottom of the hill.

Skanda Shasthi is the most important and auspicious festival of the temple when thousands of people gather. In the month of July-August, Aadi Kruthukai is also celebrated with great joy. During the festivals, the idols of Lord Muruga and his wives are decorated with gold and silver. The idols are then taken for a procession on a Golden chariot around the temple.