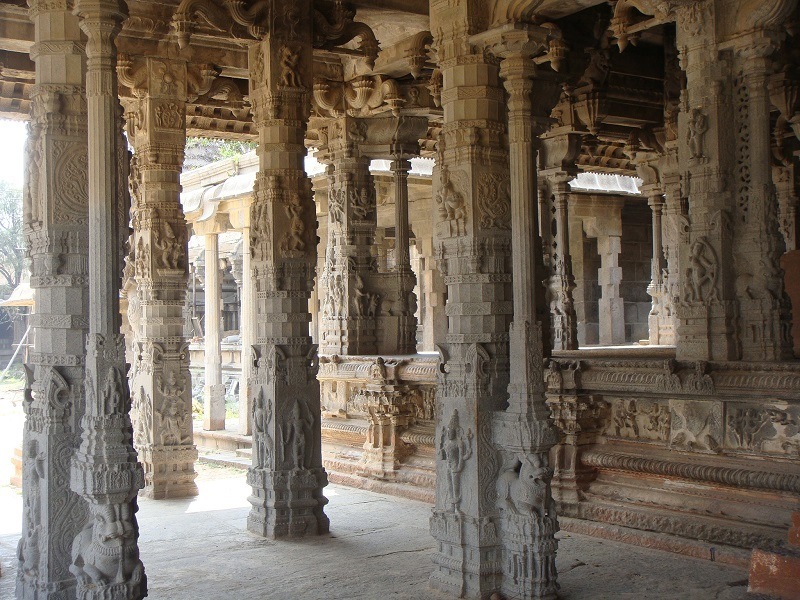 At a distance of 650 m from Virinjipuram Bus Stop and 13 km from Vellore Town Railway Station, Sri Margabandeswarar Temple is a 13th century temple situated on Bangalore - Chennai National Highway. The temple has rich sculptures and artistic pillars. The temple was built by Cholas Kings in 13th Century while Bomma Nayakars, who built Vellore Jalagandeswarar temple, made several extensions to the temple including beautiful kalyana mandapa.

The main deity of this temple is Swayambu Lingam known as Margabandeeswarar. The Siva Lingam is slightly leaning to North East direction. The Goddess of the temple is Maragadambal. Other deities seen in the temple are Ganapathy, Subramanya, Chandra Mouleeswara, Pancha Mukha Lingam, Saptha Matrukas, Lakshmi, Saraswathy & Durga. In this temple Lord Brahma is worshiped as Virinjan. He worshipped Lord Shiva at this place and hence it got the name Virinjipuram.

The rays of sun fall on the presiding deity during the Panguni month (March/April). The roof above the sanctum sanctorum is decorated with Rudraksha. The temple is a very good example of Dravidian temple architecture. This is the birth place of renowned Vedic scholar and Shiva devotee Sri Appaya Dikshithar.

The Simha teerth, the tank with the lion faced sculpture located inside the temple complex is a nicely built. The temple has a beautiful large tower in the east direction. The highlight of the temple is two Kalyana Mandapas located on either side of the outer enclosures. Both the mandapas are filled with beautifully carved pillars and sculptures. One can find various forms of Shiva, Vishnu and other Gods wonderfully engraved on pillars of these mandapas. Narasimha coming out of pillar, killing Hiranyakasipa, Vishnu with musical instruments, and other such wonderful figures can be found in these mandapas.

The 10 day annual festival, Theerthavari in Panguni (March/April), Shivrathri (February/March) and Navarathri (September/October) are major festivals celebrated in the temple.