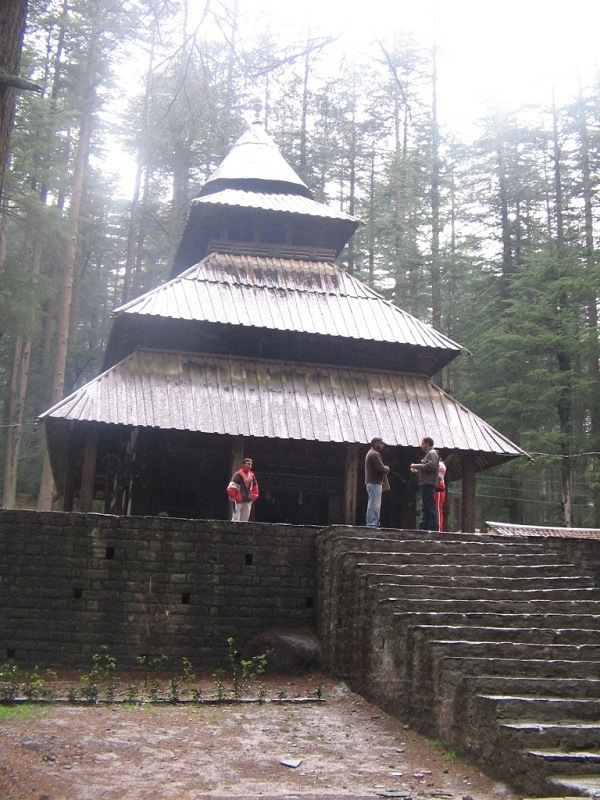 At a distance of 2 km from Manali Bus Stand, Hidimbi Devi Temple also known as the Dhungri Temple is an ancient cave temple dedicated to Hidimbi Devi. Located in the middle of dense forest Called Dhungri Van Vihar and from the name of the forest only the temple drives its name. Hidimbi Devi Temple is of the top places to visit in Manali which was built in 1553 by Raja Bahadur Singh.

The temple is dedicated to Hidimbi Devi, sister of Hidimba and wife of Bhima, one of the Pandavas from Mahabharata epic. According to the legend, the Pandavas stayed in Himachal during their exile. One of the brothers Bhima fell in love with Hidimbi, the sister of the ruler Hidimba. Bhima and Hidimbi had a son but when Bhima and the Pandavas returned from exile she stayed back and performance penance and attained the status of goddess.

The Hidimbi Devi temple is 24 meters tall and consists of three square roofs with timber tiles, surmounted by a cone-shaped fourth roof that is covered in brass. The wooden facade and windows of the temple are richly carved. The wooden door frame is ornamented with carvings of various deities and other designs. The walls of the temple are strangely decorated with horns of animals. The base of the temple is made of whitewashed mud-covered stonework.

The temple is in pagoda style and comprises no idol within; some footprints are engraved and are worshiped by devotees. The interior of the temple is occupied by the large rock and contains no useable space except for the ground floor. A rope dangles from the ridge that is said to have been used to hang victims by the hands, which were then swung, bleeding and injured over the large rock in the presence of the goddess.

The temple is also known for a fair held every year in Hindu calendar month of Sravan (Jul / Aug) in the memory of Raja Bahadur Singh. The fair is popularly known as Bahadur Singh Re Jatar. There is another fair too which is held on 14th May each year in the celebration of birthday of Hidimbi Devi.