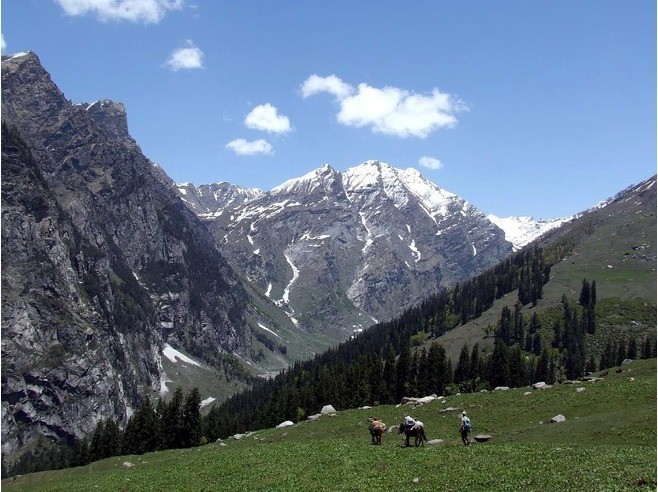 At a distance of 40 km from Kullu, 255 km from Shimla, 295 km from Chandigarh, and 545 km from Delhi, Manali is a breathtakingly beautiful hill station nestled in the mountains of Himachal Pradesh near the northern end of the Kullu Valley. Kullu Manali is one of the top hill stations in India, and among the top tourist places in Himachal.

Manali is renowned for its snow-covered mountains, scenic beauty, history, and culture. It is located at an altitude of 2050 m and is spread along the banks of the river Beas. Often referred to as the 'Valley of the Gods', Manali is one of the popular places to visit near Delhi. Naggar Castle, Hidimbi Devi Temple, and Rohtang Pass are among the must include places in Manali tour packages.

Manali is named after the Hindu lawgiver Manu. The word Manali is derived from Manavalaya meaning the abode of Manu or 'Home of Manu'. According to the legend, sage Manu stepped off his ark in Manali to recreate human life after a great flood had overwhelmed the world. The Old Manali village has an ancient temple dedicated to sage Manu.

Manali is famous as a honeymoon destination among Indian tourists. Manali is also famous for adventure sports like skiing, hiking, mountaineering, Paragliding, rafting, kayaking, and mountain biking. Paragliding in Manali is an unforgettable experience.

September to March is the best time to visit Manali. Most of the adventure sports are conducted during June to September period.

How to Reach Manali - Full Details

Top 10 Places to Visit in Manali

At a distance of 13 km from Kullu, 14 km from Naggar, and 27 km from Manali, Raison is a small cluster of villages on the banks of the Beas River. It is one of the top rafting destinations in Himachal Pradesh, and among the must-visit places for adventure buffs during their Kullu tour.

Situated at an altitude of 1433 m, Raison is well known for its camping sites and white-water river rafting. Numerous apple orchards and fruit gardens of plums and apricots add to the natural beauty of the place. Apart from nature, Raison is famous for adventure activities like rafting, trekking, mountain climbing, and river crossing, etc. Rafting in Raison is one of the top things to do in Kullu.

By the end of the winter season, in March, the whole region becomes colorful with blooming flowers. This place is also famous as the rural center of AIIMS where summer camps .....

According to legend, Manikaran is associated with Lord Shiva and Goddess Parvati. Once while roaming through the valley, Shiva and Parvati came across the place called Manikaran and they decided to stay for some time. During their stay here, Goddess Parvati lost her Mani (precious stones) in the waters of a stream. Upset over the loss, she asked Shiva to retrieve it. Lord Shiva commanded his attendant to find the Mani for Parvati. However, when they failed he was extremely angry. He opened .....

At a distance of 4 km from Vashisht Temple and 7.5 km from Manali Bus Stand, Jogini or Jogni Falls is a beautiful waterfall situated near Vashisht Village in Himachal Pradesh. It is one of the famous waterfalls in Himachal, and among the popular places to visit in Manali.

Jogini Fall is formed by the tributary of the Beas River. Jogini Falls is situated on the Northern edge of Vashisht Village which marks the village boundary. The waterfall cascades down from a height of around 150 feet through multiple levels. There is a small pool at the base formed by the fall and visitors can take a plunge in the water and spend some time. This is one of the top attractions you must include in Manali Packages.

The flow of the water is heaving in monsoons and suggested not to adventure into the water during this .....

At a distance of 2 km from Manali Bus Stand, Hidimbi Devi Temple also known as the Dhungri Temple is an ancient cave temple located in the middle of a dense forest called Dhungri Van Vihar in Manali. It is of the top places to visit in Manali.

Built-in 1553 by Raja Bahadur Singh, the temple is dedicated to Hidimbi Devi, sister of Hidimba and wife of Bhima, one of the Pandavas from the Mahabharata. According to the legend, the Pandavas stayed in Himachal during their exile. One of the brothers Bhima fell in love with Hidimbi, the sister of the ruler Hidimba. Bhima and Hidimbi had a son but when Bhima and the Pandavas returned from exile she stayed back, performed penance, and attained the status of goddess.

The Hidimbi Devi temple is 24 meters tall and consists of three square roofs with timber tiles, surmounted by a cone-shaped fourth roof that is covered in brass. The wooden facade and windows of .....

At a distance of 3 km from Manali Bus Stand, Manu Temple dedicated to the Indian sage Manu is located at old Manali. Manali is named after the sage Manu who was the creator of human race on earth according to mythology and it is believed that he meditated here. This is supposed to be the only temple of Manu in India. Manu Temple is one of the best Manali tourist places.

Travellers can enjoy a beautiful view of the surrounding hills and river Beas from the temple. Lying in the congested locality of old Manali, the temple is often visited by the tourists who arrive from different parts of the world.

Manu Temple was built in pagoda style of architecture. The temple was rebuilt in the year 1992, when the vaulted ceiling and marble floors were added. One can find various artifacts along with the idols of gods and goddesses in different postures in this temple.

At a distance of 20 km from Manali, and 22 km from the Kullu, the Naggar Castle is a famous castle located in Naggar. It is one of the best heritage places in Himachal, and among the not to miss in during your Manali tour.

Naggar Castle is a magnificent historical structure that overlooks the Kullu valley. The castle was built by Raja Sidhi Singh in 1460 AD. The Castle was used as a Royal residence and state headquarters until the British took over the whole Kangra and Kullu from Sikh's in 1846. Raja Gyan Singh sold it to the first assistant commissioner, Major Hay for a Gun. The northern wing of the castle was later converted to the European way of living by putting in staircase, fire place and chimneys. He later sold it to the Government when it was used as a courthouse. In 1947, with the departure of the British the court-activity ceased.

The castle was built in an impressive .....

At a distance of 43 km from Solang Valley, and 52 km from Manali, Rohtang Pass is a high mountain pass located on Manali - Leh Highway (NH-21) at an altitude of 4111 m (13,400 ft). It is one of the most popular adventurous places in Himachal, and among the major Manali places to visit.

Rohtang Pass is a high mountain pass on the eastern Pir Pangal Range of the Himalayas. It is the gateway to Lahaul, Spiti, Pangi, and Leh valley. The pass is on the watershed between the water basins of the Chenab River and the Beas River. The word 'Rohtang' is literary means 'pile of corpses'. People die all the time due to bad weather while trying to cross the Pass. It is one of the best places to experience snow in the summer season in Himachal.

Rohtang Pass is a very beautiful and popular spot in Manali with more than 25 lakh visitors every year as part of .....

At a distance of 12 km from Manali Bus Stand, Solang Valley locally known as Solang is a beautiful valley situated at Solang village near Manali, Himachal Pradesh. It is one of the most well-known places to visit near Delhi for skiing, mountaineering, and trekking activities.

Among the top tourist attractions in Manali, Solang Valley is situated between Solang village and Beas Kund. It lies at an altitude of 8500 ft and is covered with green dense forests. It offers panoramic views of the surrounding snowcapped mountains and glaciers.

The beauty of Solang Valley is unparalleled and many people visit the valley every year during their Manali trip just to enjoy its pristine, snow-white magnificence, especially in winter, when the entire place is covered by white snow. With the groves of emerald green trees .....

At a distance of 3.5 km from Manali Bus Stand, Vashist Temple in Manali is dedicated to sage Vashisht, the Kula guru of Lord Rama in the village Vashisht across the River Beas. It is among the most famous places to visit in Manali.

The village of Vashisht was named after Rishi Vashisht one of the seven sages of Hindu. According to the legend, Rishi Vashisht was left depressed on finding out that his children had been killed by Vishwamitra. Rishi Vashisht tried to commit suicide by jumping into a river but the river refused to kill him. He then started a new life in the village here. The river which took the rishi to the village was named Vipasha, meaning freedom from bondage. The Vipasha River is now known as the Beas River.

The Vashisht temple is believed to be more than 4000 years old. Inside the temple there is a black stone image of the Rishi wearing dhoti. The Vashist temple is decorated with excellent and beautiful carvings .....

At a distance of 25 km from Kullu, 7 km from Naggar and 20 km from Manali, Katrain is a village in Naggar Tehsil in Kullu district of Himachal Pradesh.

Katrain is also known for being the widest point in the Kullu Valley. The view of the Beas River from Katrain is quite beautiful. The Baragarh peak towering at 3,325 meter overlooks the valley of Katrain. It acts as a base camp to visit other nearby places like Kasol, Larji, Arjuna Cave and the Basheshwar Mahadev temple. Other tourist attraction is the fruit plantations and apple orchards that abound the area.

The Katrain village offers some best spots for trout fishing. The water in the area is crystal clear. Fishing lovers would find both the Brown and Rainbow Trout in this area. The upstream regions of Himachal are well known for the abundance and availability of these two sport fish. Permission is required for fishing at Katrain from the government department. Permit for Trout fishing is only for using the rod and line .....