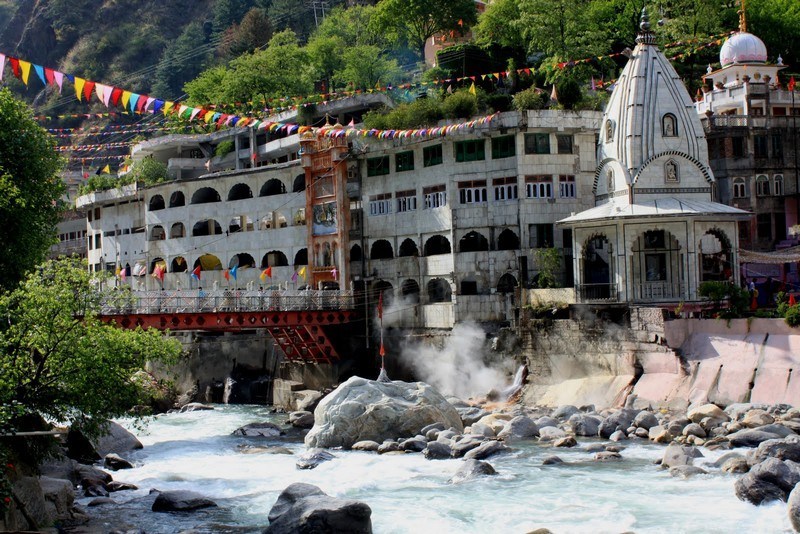 According to legend, Manikaran is associated with Lord Shiva and Goddess Parvati. Once while roaming through the valley, Shiva and Parvati came across the place called Manikaran and they decided to stay for some time. During their stay here, Goddess Parvati lost her Mani (precious stones) in the waters of a stream. Upset over the loss, she asked Shiva to retrieve it. Lord Shiva commanded his attendant to find the Mani for Parvati. However, when they failed he was extremely angry. He opened his third eye. An appeal was made before the serpent god, Sheshnag, to pacify Lord Shiva. Sheshnag hissed thereby giving rise to a flow of boiling water. The water spread over the entire area resulting in the emergence of precious stones of the type Goddess Parvati had lost. Lord Shiva and Goddess Parvati were happy at the outcome. The water of hot springs here is considered auspicious.

Manikaran is also a pilgrimage centre for Sikhs. The Guru Nanak Devji Gurudwara also known as Manikaran Gurudwara is associated with Guru Nanak. The gurudwara has a langar that offers free food. Kulant Pith in Manikaran is considered to be the most sacred pith. The Shiva temple is situated next to the Gurudwara.

Lord Ramchandra Temple is the most important temple of Manikaran and is located in the center of the town. The temple was constructed by Raja Jagat Singh in 17th century. The idol of Shri Ram installed here is believed to have been brought straight from Ayodhya. In the year 1889 the temple was renovated by Raja Dilip Singh.

Manikaran is famous for the natural hot springs. The hot springs is said to possess curative powers. Many pilgrims take a dip in the holy water to wash away their sins and others seek its curative qualities. The springs are situated near the bank of Parvati River. These are confined to several groups of hot water springs emerging at various locations spreading up to a distance of about 1.3 km along the river from the old bridge to Brahmaganga. The water of these springs is so much hot that pulses (dal), rice, vegetables etc. can be boiled and cooked in it.
Manikaran provides the base for some challenging treks to the Pin-Parvati pass which lies at a height of 4806 m.

The best time to visit Manikaran is during the months of April to October. This time is good for adventure activities like trekking and rock climbing.