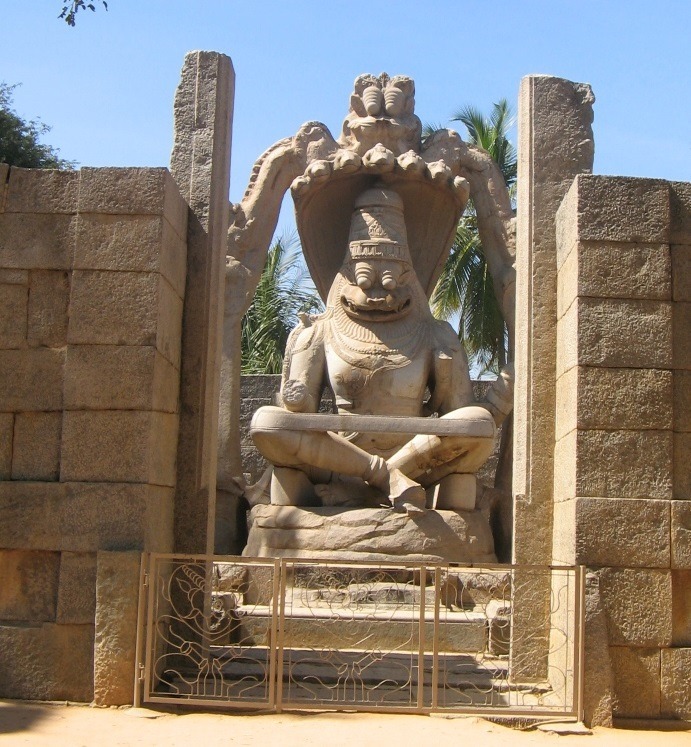 At a distance of 800 m from Hampi Bus Stand, Ugra Narasimha Temple is located south of Sri Krishna Temple in Hampi. The Lakshmi Narasimha statue is one of the most imposing sculptures found in Hampi.

The specialty of the sculpture is that it is the largest monolith statue in Hampi with a height of 6.7 m. It was carved in 1528 AD during the rule of Krishnadevaraya. The protruding eyes and the facial expression are the basis for this name. This is considered to be among the most important monuments found in Hampi and is visited by a large number of people throughout the year.

Lord Narasimha is sitting on the coil of a giant seven-headed Adisesha (guardian snake of Lord Vishnu) and the lions guard the sides of the idol. The heads of the snake act as the hood above his head. The Lord in this temple is in cross-legged yoga position with the belt supporting the knees. The original statue contained the image of goddess Lakshmi, consort of the god, sitting on his lap. But due to the destruction in 1565 AD the Goddess Lakshmi statue was badly damaged. The entire image is set within a Makara torana or an arch with a lion-mask above the hoods of Adisesha.

In the process of destruction, one of the hands of Goddess Lakshmi was broken and even today the broken hand of the Goddess can be seen resting on the back of Narasimha. Now the damaged statue of Lakshmi resides in the Archaeological Museum at Kamalapura.