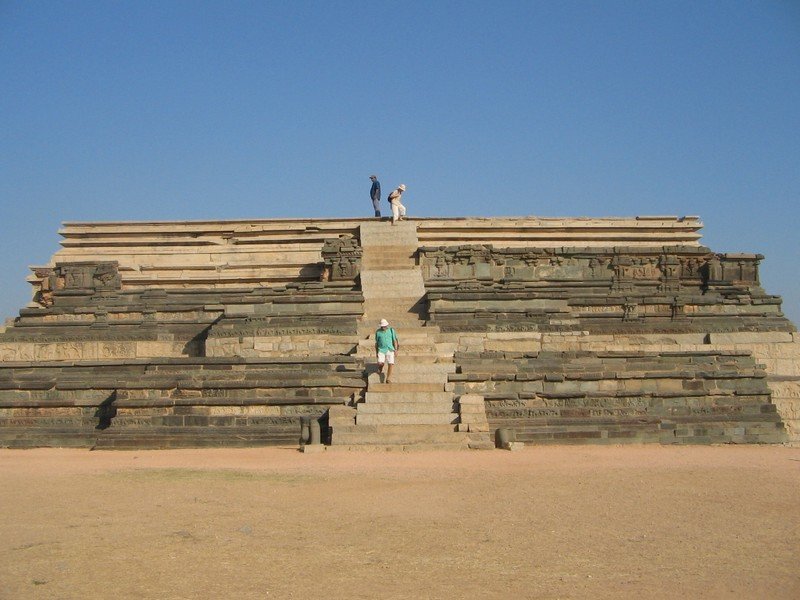 At a distance of 3.5 km from Hampi Bus Stand, Mahanavami Dibba or The House of Victory is a beautiful stone platform situated inside the Royal Enclosure in Hampi. It is also known as Dasara Dibba and is one of the most impressive structures to be visited during your Hampi Trip.

Mahanavami Dibba was built by King Krishnadevaraya in 1513 AD after his conquest over the kingdom of Udayagiri, present-day Orissa. The grand platform was used as a stage by the kings to watch the army march past, the war games, and the royal procession that were held during the Mahanavami festival, also known as the Dasara festival, hence the name Mahanavami Dibba. It is one of the most fascinating Hampi tourist places.

Dasara Dibba represents the typical Vijayanagara style of architecture. The stone platform is about 12 m in height. The huge structure is a square platform with three layers that are richly decorated with beautiful carvings. The carvings at the lower portion of the Dasara Dibba are the most fascinating. The sides of the platform are also engraved with elaborate carvings of merchants, royal processions, musicians, elephants, and animals. Some of the carvings in the Dibba depict foreign traders.

The platform has two stairways to reach the top - one situated at the front and the other at the back of the structure. The front stairway is decorated with ornate carvings of elephants, horses, soldiers, and processions. The top of the platform provides a splendid view of the surrounding areas.