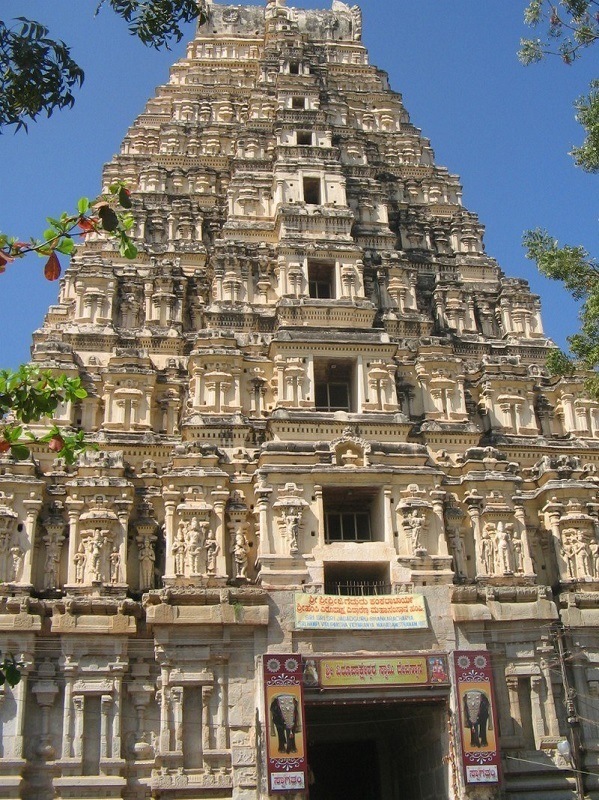 At a distance of 400 m from Hampi Bus Stand, Sri Virupaksha temple is a Hindu temple located at the western end of Hampi Bazaar in Hampi. It is the most famous and important temples in Hampi, and among the must include places in Hampi Packages.

Virupaksha Temple is dedicated to Lord Shiva and is renowned as one of the most sacred pilgrimage in Karnataka. Virupaksha is an incarnation of Lord Shiva, and among all the surrounding ruins, this temple is intact and is still in use. This temple is also called the Pampapathi temple and is one of the most places to visit in Hampi. Situated on the southern bank of the Tungabhadra River, it is a part of the Group of Monuments at Hampi, designated as a UNESCO World Heritage Site.

According to history, this temple has been functioning uninterruptedly ever since its inception in the 7th century AD and is one of India's oldest functioning temples. Originally a small, humble shrine it was expanded to its present magnificence during the reign of the Vijayanagara kings, though additions to its temple were also made by the Chalukyan and Hoysala eras.

The Virupaksha temple is the main center of pilgrimage in Hampi. The main temple consists of a large gopura (temple tower) of 160 feet tall with nine tiers facing Hampi Bazar followed by another small gopura, a large portico, a beautifully carved mandapa, and the main sanctum. The inner walls are supported by a large corridor all along with beautiful towers. The main tower dates back to the early 15th century and was renovated in the 16th century by Krishnadevaraya.

Krishnadevaraya also built a Ranga Mandapa in front of the sanctum and embellished it with Vijayanagar style bas reliefs and murals. Several of Shiva's manifestations and the ten incarnations of Vishnu are portrayed here. The scene from Mahabharata depicting Arjuna's shooting the fish to marry Draupadi is beautifully depicted here. There is also a mural depicting Saint Vidyaranya, the spiritual founder of Vijayanagar.

The idol of Lord Virupaksha in the inner sanctum is in the form of shivalinga. His consort Pampa is believed to be the daughter of Brahma. The Bhuvaneswari shrine within the Virupaksha complex has highly ornate pillars, carved ceilings & doors, and elaborate relief work, with characteristics of later Chalukyan architecture. There is a shrine to Vidyaranya, the spiritual founder of Vijayanagar in this temple. There is also a triple-headed Nandi statue.

The annual chariot festival in February and marriage festivities of Virupaksha and Pampa in December are the major festival at this temple.