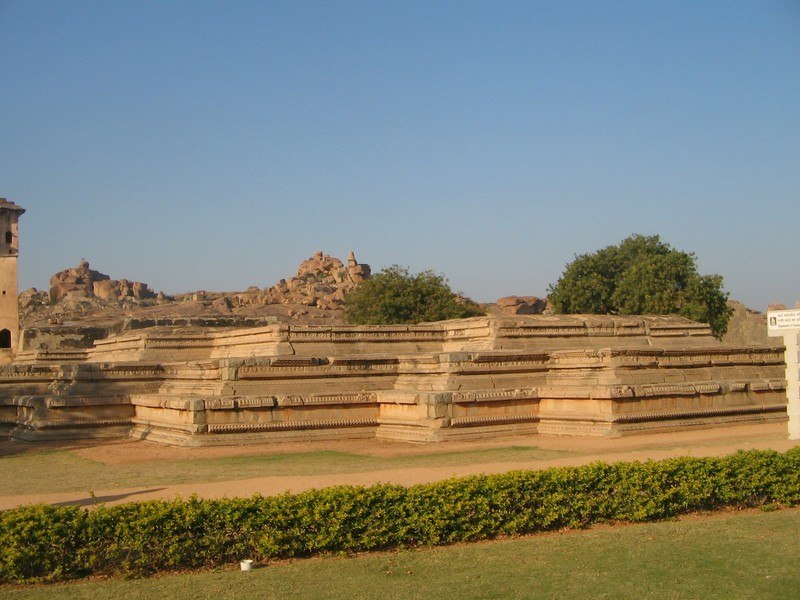 Travel Tips: Lotus Mahal is situated inside Zanana Enclosure and it is listed here as separate place of interest. The Trip duration mentioned here does not include the time for Lotus Mahal.

At a distance of 500 m from Hazara Rama Temple, 3.5 km from Hampi Bus Stand and 2 km from Kamalapur Bus Stand, The Zenana enclosure is located near the Royal Enclosure at Hampi. This was a fortified and secluded area reserved for the royal ladies of the Vijayanagara Empire.

The structures of the Zenana Enclosure are designed in the Indo-Islamic style of architecture. Zenana Enclosure has several structures such as the Lotus Mahal, Basement of the Queen's Palace, Water Pavilion, Treasury Building and the Watch Towers. The major attraction inside the enclosure is the Lotus Mahal. Apart from this, there are remains of water pavilion with a decorated platform in the center and Elephant Stables. The Queen's Palace is located at the middle of this area. This is the largest palace base excavated in the Hampi ruins so far. The Royal Treasury Building is a rectangular structure that is located in the north-western corner of the enclosure.

The enclosure is surrounded by a fortifying wall which is rectangular in plan. The four corners of the fortifications have watch towers that would have been used to keep an eye on the intruders into the Women's chambers. But now, there are just three watch towers which are located in the eastern, south eastern and northern sides of the enclosure. This area has two entrances, one in the northern side and the other in the north-eastern side.