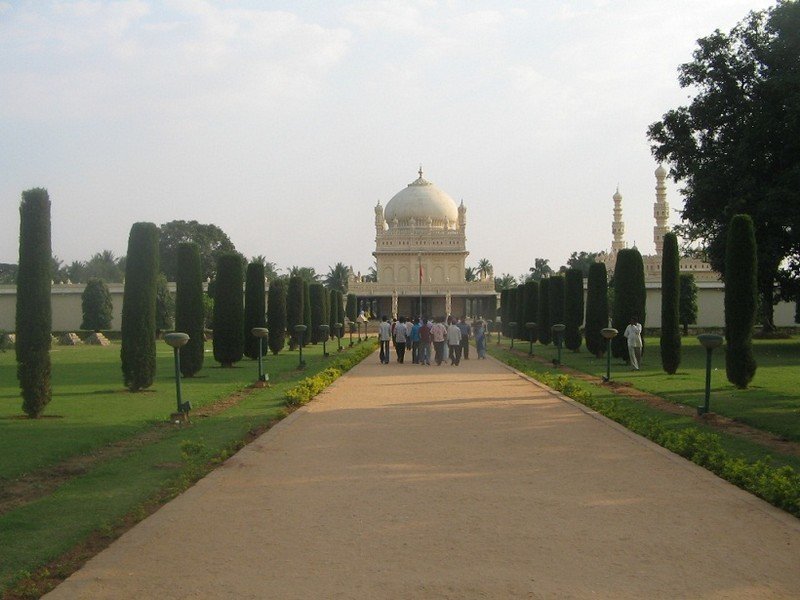 #6 of 12 Places to Visit in Srirangapatna

At a distance of 5 km from Srirangapatna Railway Station, Gumbaz is the Mausoleum of Tipu Sultan, his father Hider Ali and mother Fakr-Un-Nisa, situated at Srirangapatna. The Gumbaz was built by Tipu Sultan in 1782-1784 AD as the final resting place for his parents. Tipu was allowed to be buried here by the British, after his death in the Siege of Srirangapatna in 1799.

The Gumbaz is designed in Islamic style, with a large rectangle shaped garden, having a path leading to the mausoleum. In the middle of the garden, the Gumbaz stands on an elevated platform, consists of a dome placed on a cubical structure with ornamental railings and turrets. The dome is supported by large black granite pillars.

The importance of Gumbaz lies in its well-shaped large dome with ivory inlaid doors and carved stone windows of fine work and inscriptions. The doors of the tomb are beautifully carved and engraved with ivory works. The interior is painted in lacquer with the tiger stripe adopted by Tipu for military uniforms. The original carved doors of the mausoleum have been removed and are now displayed at the Victoria and Albert Museum, London. The present door was gifted by Lord Dalhousie.

The three graves of Tipu Sultan, his father Hider Ali and his mother Fakr-Un-Nisa are located inside the mausoleum. Next to the Gumbaz is a beautiful mosque, Masjid-E-Aksa, also built by Tipu Sultan. Many of Tipu's relatives are buried outside the mausoleum in the garden. A tablet in Persian script in eastern entrance of the Mausoleum speaks of the martyrdom of Tipu Sultan in 1799.