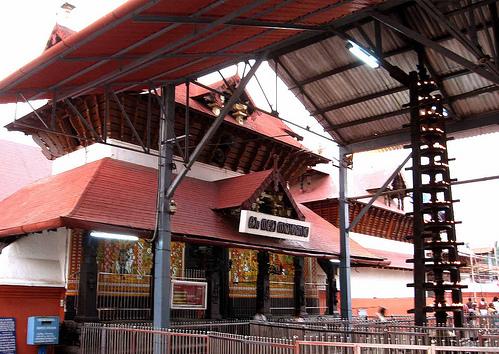 At a distance of 27 km from Thrissur & 81 km from Kochi, Guruvayoor is a temple town well-known for the most famous Sri Krishna Temple. This is one of the most popular pilgrimage sites near Kochi, and among the must-visit places during Thrissur tour.

Guruvayur Temple is a Hindu temple dedicated to the Lord Guruvayurappan, a four-armed form of the Lord Vishnu who is worshipped in the form of his avatar Krishna. According to the legends, the idol worshipped here is more than 5000 years old. But there are no historical records to establish it. Often referred to as Bhuloka Vaikunta, it is one of the most important places of worship for Hindus in Kerala and among the most prominent religious place to visit Thrissur.

The earliest temple records date back to the 17th century. In 1716, the Dutch raided Guruvayur, looted treasures, and set fire to the Western Gopuram, which was rebuilt in 1747. In 1766, Hyder Ali of Mysore captured Kozhikkode (Calicut) and then Guruvayur. He demanded 10,000 fanams in ransom to spare the temple. The ransom was paid but due to insecurity pilgrims receded. Later, in 1789 AD, Tippu destroyed the smaller shrines and set fire to the Temple, but it was saved due to timely rain. Tippu lost to the Travancore and the English in 1792. The idol, which had been hidden underground in anticipation of the Tippu's takeover, was re-installed in 1792. Ullanad Panikkars rescued and looked after the temple from 1825 to 1900. Now, the temple is managed by Guruvayur Devaswom under the control of the Government of Kerala. On 30 November 1970, a massive fire broke out in the temple, gutting the whole chuttambalam and the entire Vilakkumatam on the west, south, and north sides.

The temple is built in a typical Kerala temple architecture. The temple faces the East with two Gopurams (tower), one in the East and the other in the West. The temple was built in such a way that on Malayalam New Year's day, the first rays of the sun fall directly at the feet of Lord Krishna. The walls of the sanctum sanctorum are adorned with beautiful mural paintings and carvings. A 33-meter tall gold-plated Dwajastambham is a special attraction. There is a 7 meter high 'Deepastambham' with thirteen circular containers, which provides a wonderful sight when lit.

The square-shaped Sree Kovil has two stairs and three rooms inside and has an inner room known as Garbhagriha. In the sanctum sanctorum, the idol of Lord Sri Krishna can be seen in standing posture with four hands carrying Sankhu, Sudarshana Chakram, Lotus, and Mace. This image represents the majestic form of Vishnu as revealed to Krishna's parents Vasudeva and Devaki around the time of Krishna's birth. One can also find images of Ganapathi, Lord Ayyappa, and Edathedathu Kavil Bhagavathi inside the temple. The temple has a collection of 65 elephants, preserved at Anakotta, 3 km from the temple.

Only Hindus are allowed into temple. A strict dress code exists for people who wish to enter the Guruvayur Temple. Men are to wear mundu around their waist, without any dress covering their chest. But it is allowed to cover the chest region with a small piece of cloth (veshthi). Boys are allowed to wear shorts, but they are also prohibited from wearing a shirt. Women are allowed to wear sari and girls are to wear long skirts and blouses. Presently the dress code for women has been relaxed with shalwar kameez (chudidhar pyjamas) being allowed.

Guruvayoor Ekadasi is the main festival celebrated in Mar / Apr. A highlight of the Ekadasi is the memorial honour for Gajarajan Kesavan. On Ekadasi after night pooja the famous Ekadasi Vilakku with elephant procession takes place.