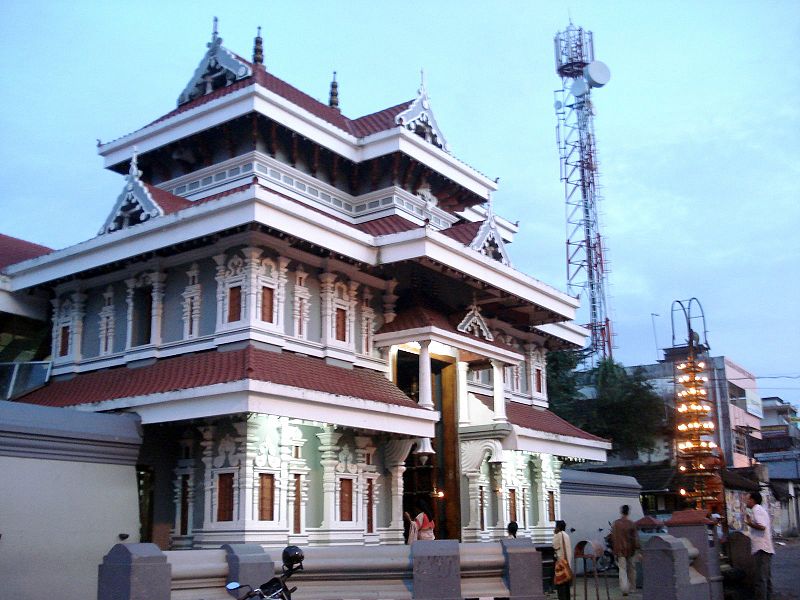 At a distance of 2 km from Thrissur Railway Station, Thiruvambadi Krishna Temple is a sacred Hindu temple situated in Thrissur, Kerala. Located to the north of the Vadakkunnathan Temple, it is one of the largest Krishna Temples in Kerala, and among the best Thrissur places to visit.

Dedicated to Lord Krishna, the oldest record of the history of Thiruvambadi Temple dates back to the 16th century. The temple was formerly situated at Edakkalathur, 20 Km Northwest of the Trichur town. The idol was transported to the present place by villagers, and the custody was given to a childless couple at the Kandanath Mana. The couple installed the idol in a hall within their house premises. As ardent worshippers of Kodungallur Bhagavathy, they regularly used to visit the temple. When they grew old, they could not travel to Kodungallur often, and they installed the idol of Bhagavathi on the left side of the Lord Krishna sanctum.

Thiruvambadi Krishna Temple is built in the impressive Kerala style architecture. Though the original temple was constructed in the 16th century, the current structure was ordered by Raja Rama Varma (also known as Sakthan Thampuran), the rules of Kochi in the 18th century. A pillar dedicated to the Kodungallur Bhagavathi is part of the temple. The main deity of Thiruvambadi Krishna Temple is Unnikrishnan, the infant form of Lord Krishna. The deity has a flute in one hand and the other hand outstretched. Goddess Bhagavathy as Devi Vishnumaya is installed just to the left of the Lord Krishna idol. It is one of the must include places in Thrissur packages.

Even though small in stature in its physical appearance, Thiruvambadi Krishna Temple is highly significant as a Mahakshethra due to its extensive rites of worship. Moreover, the temple is an active participant in the world-famous colorful festival - the Thrissur Pooram. In fact, the Pooram starts with the colorful ceremonious procession, Madathil Varavu from the Thiruvambadi Temple. Besides, Krishna Janmashtami, Navarathri, and Thiru Utsava are the other prominent festivals of Thiruvambady Temple.

Traditional dress code exists for entering the temple and entry is restricted to Hindus only. Men can only wear Mundu & Veshti, and boys can wear shorts. Women can wear Saris, skirts & Salwar Kameez.