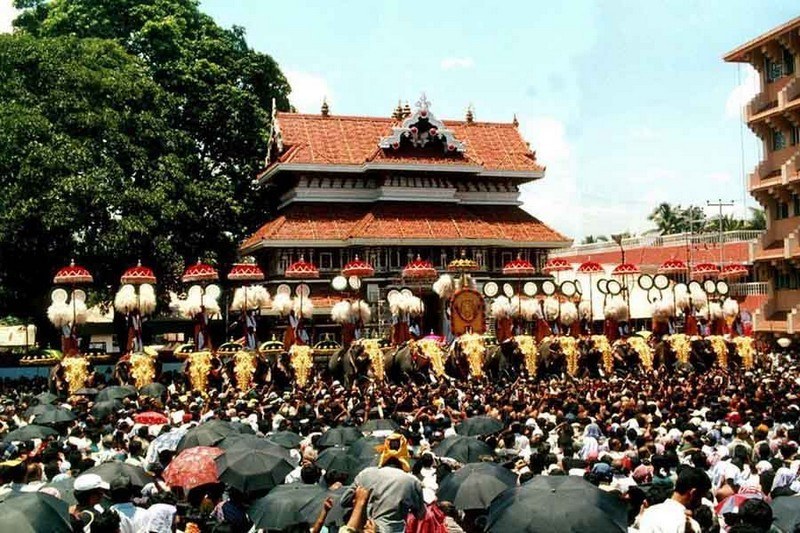 At a distance of 55 km from Athirapally, 69 km from Palakkad, 81 km from Kochi, 113 km from Kozhikode, 114 km from Coimbatore, 279 km from Trivandrum and 280 km from Madurai, Thrissur (also known as Trichur) is a city situated in central Kerala. It is one of the most popular places to visit in Kerala, and among the famous places to visit near Coimbatore & Kochi as well.

The name Thrissur was derived from Tiru-Shiva-Peru which means the big town of Lord Shiva. The name owes itself to the most famous Vadakkunathan Temple, among the must-visit places as part of Thrissur tour packages. Thrissur is also known as the Cultural Capital of Kerala because of its cultural, spiritual, and religious leanings throughout history.

Thrissur had witnessed the rise and fall of various dynasties that include the Chera and Kulasekharas in the 12th century, Zamorins in the 14th and 15th century followed by Tipu Sultan, Portuguese, Dutch and British. In the 18th century, Raja Rama Varma, popularly known as Sakthan Thampuran, re-built Thrissur after attacks from Tipu Sultan. Thrissur is also the hometown of the great Hindu Saint, Adi Shankara.

Thrissur hosts the world-famous Thrissur Pooram festival in April / May. This festival is the most colorful and spectacular temple festival in Kerala held at the Thekkinkadu Maidan. It is a festival that continues non-stop for 36 hrs with over 100 elephants, accompanied by the Panchavadyam playing till the final fireworks mark the end of the festival. UNESCO has awarded Thrissur Pooram as the most spectacular festival event on the planet. Thrissur is also known for its Onam celebrations in August / September every year.

Cochin Airport is the nearest airport which is about 51 km away from Thrissur. Thrissur Railway Station is an important railhead of the Southern Railways, which has trains from Alleppey, Mangalore, New Delhi, Trivandrum, Kochi, Mumbai, Patna, Guwahati, Chennai, and Bangalore. Thrissur is well connected to all major towns in Kerala. KSRTC Bus Station operates long-distance and inter-state services. Sakthan Thampuran Bus Stand is 1 km away from town and The North Bus Stand is in the heart of the town. There are several buses from Thrissur to Bangalore, Kochi, Coimbatore, Trivandrum, Kozhikode, Mysore, and Palani.

The best time to visit Thrissur is from Oct to May while the peak season is from Nov to Jan and Mar to May. It usually takes 2 full days to explore Thrissur.

How to Reach Thrissur - Full Details

Top 10 Places to Visit in Thrissur

At a distance of 1 km from Thrissur Railway Station, Vadakkumnathan Temple is an ancient Hindu temple situated in the city of Thrissur, Kerala. Also known as Thenkailasam or Vrishabhachalam, it is one the popular places of pilgrimage in Kerala, and among the must-visit places as part of Thrissur packages.

Dedicated to Lord Shiva, Sri Vadakkumnathan Temple is one of the largest and ancient Lord Shiva temples in Kerala. It is believed that this is the first temple created by Lord Parasurama the 6th incarnation of Lord Vishnu. The temple, along with the mural paintings, has been declared as a National Monument by India under the AMASR Act. The Archaeological Survey of India (ASI) has recommended 14 sites, including Vadakkumnathan Temple and palaces, from Kerala to include in the list of UNESCO World Heritage Sites in 2012.

The temple was built at the time of Perumthachan from .....

At a distance of 27 km from Thrissur & 81 km from Kochi, Guruvayoor is a temple town well-known for the most famous Sri Krishna Temple. This is one of the most popular pilgrimage sites near Kochi, and among the must-visit places during Thrissur tour.

Guruvayur Temple is a Hindu temple dedicated to the Lord Guruvayurappan, a four-armed form of the Lord Vishnu who is worshipped in the form of his avatar Krishna. According to the legends, the idol worshipped here is more than 5000 years old. But there are no historical records to establish it. Often referred to as Bhuloka Vaikunta, it is one of the most important places of worship for Hindus in Kerala and among the most prominent religious place to visit Thrissur.

At a distance of 32 km from Chalakudy, 59 km from Thrissur, 73 km from Kochi, 100 km from Munnar, 122 km from Kottayam, 170 km from Kozhikode, 174 km from Coimbatore & 269 km from Trivandrum, Athirapally Waterfall is a scenic waterfall situated at the entrance of Sholayar hill range in the Thrissur district. It is one of the best waterfalls in India, and among the most famous tourist places in Kerala.

Formed over the Chalakudy River, Athirapally is the biggest waterfall in Kerala. This waterfall drops down from a height of 80 feet through several parallel streams offering a great scenic beauty. In the monsoon season, the water gets strength and all the streams join together and appear like Niagara Falls. This is the biggest waterfalls in Kerala and is well-known for its scenic beauty. It is one of the popular places to visit near Kochi.

At a distance of 2 km from Thrissur Railway Station, Thiruvambadi Krishna Temple is a sacred Hindu temple situated in Thrissur, Kerala. Located to the north of the Vadakkunnathan Temple, it is one of the largest Krishna Temples in Kerala, and among the best Thrissur places to visit.

Dedicated to Lord Krishna, the oldest record of the history of Thiruvambadi Temple dates back to the 16th century. The temple was formerly situated at Edakkalathur, 20 Km Northwest of the Trichur town. The idol was transported to the present place by villagers, and the custody was given to a childless couple at the Kandanath Mana. The couple installed the idol in a hall within their house premises. As ardent worshippers of Kodungallur Bhagavathy, they regularly used to visit the temple. When they grew old, they could not travel to Kodungallur often, and they installed the idol of Bhagavathi on the left side of the Lord Krishna .....

With wonderful temple structure, this temple is considered to be more than 1000 years old. Dedicated to Goddess Bhagavathy (an incarnation of Goddess Durga), this temple is very close to Vadakkumnathan Temple.

This temple is very popular for its traditional panchavadyam 'Palachottil Melom'.

At a distance of 1 Km from Thrissur Railway Station, Dolours Basilica (or Basilica of our Lady of Dolours) is believed to be the biggest and tallest Church in Asia.

Built in 1875, this Roman Catholic Church is also called Puthen Palli (New Church). This church was built with the support of Raja Rama Varma, Maharaja of Kochi. However, most of the current structure is the result of major renovation held in the 19th century. With built up area of 25,000 Sq. Ft, this Church has three towers, two at the front side and one at the rear (called as Bible Tower). The towers at the front are 146 feet tall and the rear tower is 260 feet in height.

This church is dedicated to Mother Mary. Eight music bells imported from Germany are special attractions of this church. The chapel has 15 altars. The church is famous for its Gothic style of architecture.

At a distance of 22 km from Thrissur, Peechi Dam is a picturesque dam situated at Peechi village near Thrissur. It is one of the scenic tourist places in Thrissur.

Built across the Manali River, the Peechi Dam was built in 1959. Ikkanda Warrier (1890-1977), the first Prime Minister of the then independent state of Kochi, India, was the architect of Peechi Dam. The dam was started as an irrigation project for the surrounding villages in the Thrissur district and caters to the drinking water needs of the population of Thrissur City.

The dam has a catchment area of nearly 3,200 acres. There is a nice botanical garden with cascading fountains near the dam which is an added attraction to the visitors. One can go boating in the reservoir during Thrissur tour. Peechi-Vazhani Wildlife Sanctuary situated near the dam is worth paying a visit. It is home to .....

At a distance of 3 Kms from Thrissur Railway Station, Zoo is a major attraction in the city of Thrissur.

The zoo provides shelter for many endangered species like the Asiatic Lion, Tiger and the extremely rare lion-tailed macaque, etc. It has an impressive reptile house with King Kobra, Indian python, krait, etc. The reptile house is on of the best in South India.

The Zoo complex also has an impressive museum complex, which has a good collection of wood carvings, metal sculptures, Kathakali figures and ancient jewellery. There are wonderful figures and good paintings in the museum. It also has a great collection of traditional Kerala lamps.

At a distance of 23 km from Thrissur, Peechi-Vazhani Wildlife Sanctuary is a protected sanctuary located near Peechi village. It is one of the prominent places of wildlife in Kerala, and among the must-include places in Thrissur sightseeing tour.

There are more than 50 species of orchids and medicinal plants in this sanctuary. There are 60 types of birds, 25 types of mammals, and 10 types of snakes in the sanctuary. The sanctuary provides shelter for Leopards, Tigers, Sambhar Deer, Elks, Barking Deer, Spotted Deer, Wild Dogs, Fox, Langurs, etc.

Peechi village is the entry point to the sanctuary. The .....

At a distance of 36 Kms from Thrissur, Chimmony Dam (also known as Chimmini Dam) is a picturesque dam constructed across Chimmony Puzha. Located in Echippara village (2 Kms), near Varandarappilly town, the dam is surrounded by the Chimmony Wildlife Sanctuary.

Close to Peechi Dam and Mangalam Dam, the Chimmony Dam provided water supply for drinking and forming to the nearly by villages. Situated on Nelliyampathy slopes of Western Ghats, Chimmony Dam is a place with immense natural beauty. Boating is also available in the reservoir.

It can be reached via Varandarappilly & Palappilly from Thrissur. It has limited public transportation. Best way to reach the dam is to hire private vehicle from Varandarappilly.