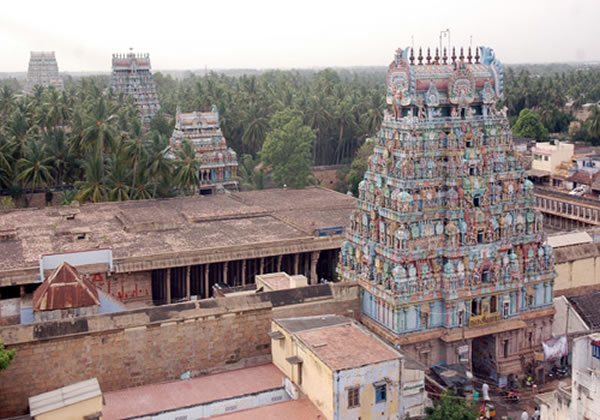 #3 of 18 Places to Visit in Tiruchirappalli

At a distance of 2.5 km from Srirangam Temple and 11 km from Trichy Railway Junction, Sri Thiruvanaikoil or Thiruvanaikaval, is famous for Jambukeswarar Temple dedicated to Lord Shiva. The temple was built by Kochengon, one of the Early Cholas around 1800 years ago on Srirangam Island.

Thiruvanaikoil Temple is one of the five major Shiva Temples known as Panchabhoota Sthala representing element of water. The sanctum has Shiva Lingam in the form of Appu lingam (water lingam). The sanctum of Lord Jambukeshwara has an underground water stream and one can see water coming out of that stream all the time. The presiding goddess is Devi Akilandeswari Amman.

According to legend, Parvathi performed penance in the form of Akilandeswari in the Jambu forest. She made the lingam out of the water of river Kaveri, installed it under the Venn Naaval tree evolved out of Saint Jambu and commenced her worship. Lord Siva at last gave darshan to Devi Akhilandeswari and taught her Siva Gnana.

According to Sthala Purana, there were two Siva Ganas by name Malyavan and Pushpadanta. They always quarrel with each other and fight for one thing or other. On top of all in one fight Malyavan cursed Pushpadanta to become an elephant and the latter cursed the former to become a spider. Both the elephant and the spider came to Jambukeshwaram and continued their Shiva worship. The elephant collected water from river Cauvery and conducted Abhishekam to the lingam under the Jambu tree daily. The spider constructed his web over the lingam to prevent dry leaves from dropping on it and prevent Sunlight directly falling on Shiva.

When the elephant saw the web and thought that as dust and tore them by pouring water. The spider became angry and crawled into the trunk of the elephant and bit the elephant to death killing itself. Lord Siva, moved by the deep devotion of the two relieved them from their curse. As an elephant worshipped the Lord here, this place came to be known as 'Thiru Aanai Kaa' (Thiru - Holy, Aanai - Elephant, Kaa - Forest). Later the actual name 'Thiruaanaikaa' become Thiruvanaikoil.

Inside the temple complex, there are 5 enclosures. The first massive outer wall called Vibudi Prakara, is a mile long, 25 feet high and 2 feet thickness. The 4th enclosure has a hall with 796 pillars and a small tank fed by springs. The 3rd enclosure contains the 2 gopuras, one 73 feet tall and the other 100 feet tall. The 2nd enclosure has another gopura with 65 feet height and several small shrines. The sanctum with the Appu lingam is present in the last enclosure. The entrance of the sanctum sanctorum is only 4 feet high and 2.5 feet wide.

Since Devi Akhilandeswari worshipped Lord Shiva in this temple, even today at noon the priest dresses like a female and performs puja to Lord Jambukeswara. No Thiru Kalyanam is conducted at this temple.

Panguni Brahmmotsavam in Mar-Apr and Aadi Pooram in Jul-Aug are the major festivals celebrated in the temple.