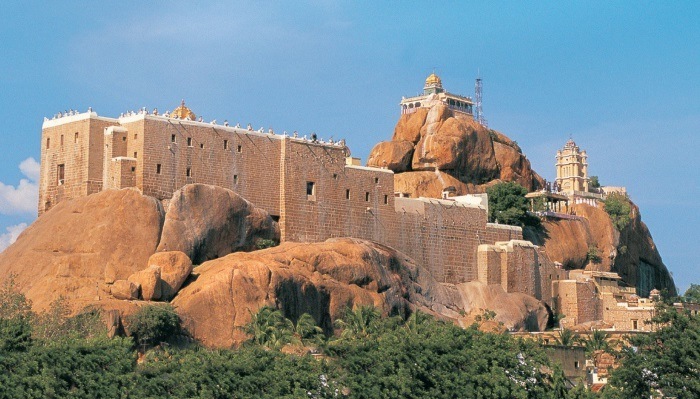 #2 of 18 Places to Visit in Tiruchirappalli

At a distance of 5 km from Trichy Railway Junction, the Rock Fort is a historic fort and temple complex situated in Trichy. It is one of the important places to visit as part of Trichy packages.

Perched on a large rock with a height of 85 meters, the temple was initially built by the Pallavas but the Nayaks made use of its naturally fortified position and designed it as a fort. There are 344 steps carved out of rock lead to the top. The fort complex has witnessed fierce battles between Madurai Nayakas and Bijapur, Carnatic, and Maratha forces. The fort played an important part during the Carnatic wars, helping lay the foundations of the British Empire in India. The Rockfort is the most prominent landmark of the city.

The Ucchi Pillayar Temple is a 7th-century Hindu temple, dedicated to Lord Ganesh located on top of Rock Fort at an altitude of 273 feet. The Ganesh temple is a smaller shrine with access through steep steps carved on the rock and provides a stunning view of Trichy. Due to its ancient and impressive architecture created by the Pallavas, the temple is maintained by the Archaeological department of India.

According to the Mythology, when Vibhishana returned home after the coronation of Rama, he brought with him an idol of Lord Ranganatha in a lying posture. He had been strictly warned not to put it down on the ground for any reason. When Vinayaka appeared before him as a Brahmin boy. Vibhishana asked him to hold it for a while Vinayaka accepted his request on condition that he should come and relieve him before he called him thrice. Vibhishana went to perform his evening ablutions. But within a short time, Vinayaka called him thrice and put it down, and ran away to the top of the hill. The idol stuck to the ground. The famous Ranganatha Temple was built where the idol was placed.

The Thayumanavar Temple, the biggest of the three temples, is a rock-cut temple situated in the middle of Rock Fort Hill on the way to Ucchi Pillayar Temple. Lord Shiva is worshiped as Thayumanavar and is represented by the lingam and his consort Parvati is depicted as Mattuvar Kuzhalammai. A gold-topped tower raises over its sanctum, which houses a 2m-high Shiva lingam. This temple was built by King Mahendra Varman of the Pallava dynasty in the 6th Century. While major portions of the temple were built by Pandyan rulers during the 8th century. Pieces of evidence of Jain occupation around the rock are still extant.

There are two rock-cut temples in the fort, one in the lower part of the fort called Lower Cave temple and the other in the complex outside the Thayumanavar Temple called the Upper Cave temple.

The Chittirai festival during the Tamil month of Chittirai (April - May) is the main festival celebrated here for fifteen days.

Ucchi Pillayar Temple: 6 AM to 8 PM