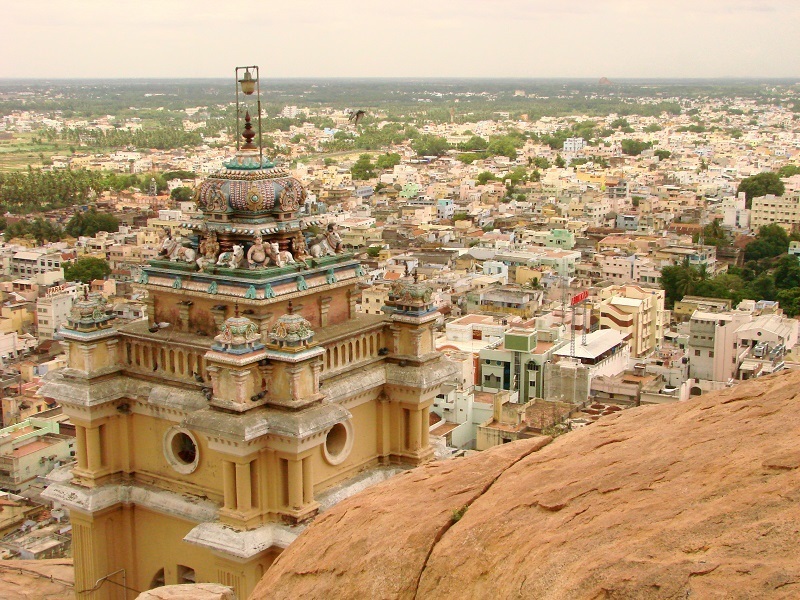 At a distance of 57 km from Thanjavur, 133 km from Madurai, 212 km from Coimbatore, and 334 km from Chennai, Tiruchirappalli, also called Tiruchi or Trichy is the 4th largest city and administrative headquarters of Tiruchirappalli district in Tamilnadu. Situated on the banks of the Cauvery River, Trichy is one of the famous Tourist places in Tamilnadu.

Tiruchirappalli is home to numerous historical monuments and temples that attract tourist and pilgrims from all parts of the country throughout the year as part of Trichy tour packages. The history of Tiruchirappalli begins in the 3rd century BC, when it was under the rule of the Cholas. It was a stronghold of the early Cholas which later fell to the Pallavas. But the Pallavas never really managed to retain control of this strategic city and lost it to the Pandyas several times. Trichy continued to be in the possession of Cholas until the decline of the empire after which it became a Vijayanagara stronghold. Trichy came under the rule of Nayaks of Madurai after the collapse of Vijayanagara, later to the Marathas of Tanjore, the Nawabs of Carnatic, the French and finally the British. Trichy flourished under Madurai Nayaks and prospered to be the city that it is today. The city played a critical role in the Carnatic Wars (1746-1763) between the British and the French East India companies.

Ranganathaswamy temple at Srirangam, one of the most famous pilgrimage centers in South India is situated near Trichy. Rockfort Temple, a spectacular monument perched on a massive rock is another important monument in old city of Trichy. The Rockfort, Jambukeswarar temple at Thiruvanaikaval, Uraiyur, Maariamman Temple, Government Museum and the St John's Church are other places to visit in Trichy.

Tiruchirappalli is internationally known for a brand of cheroot known as the Trichinopoly cigar. The city is very popular for its cigars, handloom saris and stone-studded jewelry, Pith models and cheroots. According to the National Urban Sanitation Policy (2010), Tiruchirappalli was one of the ten cleanest cities in India.

The best time to visit Trichy is during the months of November to March. It usually takes two full days to explore all the important places in Trichy.

How to Reach Tiruchirappalli - Full Details

Top 10 Places to Visit in Tiruchirappalli

#1 of 18 Places to Visit in Tiruchirappalli

At a distance of 1 km from Srirangam Railway Station, 9 km from Trichy Railway Junction, 62 km from Thanjavur, 145 km from Madurai & 327 km from Chennai, Sri Ranganathaswamy Temple is a prominent Hindu temple situated at Srirangam near Trichy. It is one of the famous temples in South India, and among the most visited places in Tamilnadu.

Constructed in the Dravidian style of architecture, Sri Ranganathaswamy Temple is the foremost of the eight self-manifested shrines of Lord Vishnu, and among the important places of pilgrimage in Tamilnadu. Built across an area of 156 acres, this temple is dedicated to Ranganatha, a reclining form of Hindu deity, Lord Vishnu. This temple lies on an island formed by the twin Rivers Cauvery and Kollidam. Though the temple existing since the 2nd century BC, the archaeological inscriptions are available only .....

#2 of 18 Places to Visit in Tiruchirappalli

At a distance of 5 km from Trichy Railway Junction, the Rock Fort is a historic fort and temple complex situated in Trichy. It is one of the important places to visit as part of Trichy packages.

Perched on a large rock with a height of 85 meters, the temple was initially built by the Pallavas but the Nayaks made use of its naturally fortified position and designed it as a fort. There are 344 steps carved out of rock lead to the top. The fort complex has witnessed fierce battles between Madurai Nayakas and Bijapur, Carnatic, and Maratha forces. The fort played an important part during the Carnatic wars, helping lay the foundations of the British Empire in India. The Rockfort is the most prominent landmark of the city.

#3 of 18 Places to Visit in Tiruchirappalli

At a distance of 2.5 km from Srirangam Temple and 11 km from Trichy Railway Junction, Sri Thiruvanaikoil or Thiruvanaikaval, is famous for Jambukeswarar Temple dedicated to Lord Shiva. The temple was built by Kochengon, one of the Early Cholas around 1800 years ago on Srirangam Island.

Thiruvanaikoil Temple is one of the five major Shiva Temples known as Panchabhoota Sthala representing element of water. The sanctum has Shiva Lingam in the form of Appu lingam (water lingam). The sanctum of Lord Jambukeshwara has an underground water stream and one can see water coming out of that stream all the time. The presiding goddess is Devi Akilandeswari Amman.

According to legend, Parvathi performed penance in the form of Akilandeswari in the Jambu forest. She made the lingam out of the water of river Kaveri, installed it under the Venn Naaval tree evolved out of Saint Jambu and commenced her worship. Lord Siva at last gave darshan to Devi Akhilandeswari and taught her Siva Gnana.

#4 of 18 Places to Visit in Tiruchirappalli

At a distance of 1 km from Samayapuram Bus Stand, 11 km from Srirangam, 19 km from Trichy, 66 km from Thanjavur & 317 km from Chennai, Sri Mariamman Temple situated at Samayapuram on NH-45 is one of the popular temples in the state of Tamil Nadu.

Sri Mariyamman Temple is dedicated to Samayapurathal or Mariamman, an incarnation of Goddess Shakti. The main deity in the sanctum is made of sand and clay and hence there are no abhishekams conducted to the main deity, but instead the abishekam is done to the small stone statue in front of it.

According to legend, the present deity was at the Ranganathaswamy temple at Srirangam, and one of chief priests of the temple believed that the idol caused him illness and hence asked it to be removed from the temple. It is a common belief that such local deities have immense powers and they must always be satisfied by proper offerings and sacrifices.

According to history, King Vijayaraya Chakaravarthi built the present day temple in .....

#5 of 18 Places to Visit in Tiruchirappalli

At a distance of 35 km from Trichy, Sri Brahmapureeswar Temple is one of the rare temples dedicated to Lord Brahma situated at Thirupattur. While this is predominantly a Shiva temple, it is very closely associated with Lord Brahma. Devotees believed that a person can change his fate by seeking blessings at Brahmapureeswarar Temple.

The presiding deity of the temple is Sri Brahmapureeswarar in the form of a Swayambu Lingam. He is called Brahmapureeswarar since he changed the destiny of Brahma. There are seven enclosures leading to the sanctum. Every year in the Tamil month of Panguni (March-April) for three days, the sunlight falls directly on the presiding deity. It is a miracle that the sun rays cross the seven entrances and fall directly on the lingam.

Goddess Parvathi is worshipped as Brahma Sampath Gowri, situated adjacent to Sri Brahmapureeswarar shrine. There is a separate shrine for Lord Brahma in meditative pose sitting on a lotus. The idol of Lord Brahma is magnificent .....

#6 of 18 Places to Visit in Tiruchirappalli

At a distance of 19 km from Srirangam and 26 km from Trichy, Sri Prasanna Venkatachalapathi temple is a famous Vishnu temple situated in Gunaseelam. Also known as Abhimana Sthalam, it is located on the banks of River Cauvery.

According to legend, Gunaseelar Rishi after his darshan at Tirupathi, came here and begged the Lord to come and stay in his ashram on the banks of Cauvery River. The place came to be known as Gunaseelam after his name.

The sanctum sanctorum of the temple houses the presiding deity Prasanna Venkatachalapathi in standing posture. The image is depicted with four hands, one showing Abhaya mudra other three are carrying Gatha, Conch and Chakra. There are carvings .....

#7 of 18 Places to Visit in Tiruchirappalli

At a distance of 5 km from Trichy Railway Junction, Sri Vekkali Amman Temple is an important pilgrimage centre dedicated to of Goddess Parvathi. It was the seat of early Cholas situated in Woraiyur.

The presiding deity in this temple is found facing towards north. It was believed by the ancient kings that Gods and Goddess facing north will bless the kings with victory in the battle. Hence all the ancient kings used to pray Vekkali Amman before leaving to the battle field.

The temple is conducting the Sarva Chandi Homam for the past 23 years in the month of Avani (August / September), 5 day festival in .....

#8 of 18 Places to Visit in Tiruchirappalli

At a distance of 750 m from Viralimalai Bus Stand, 28 km from Trichy and 43 km from Pudukkottai, Viralimalai Murugan Temple is one of the famous Hindu temples dedicated to Lord Murugan, also known as Subrahmanya located in the town of Viralimalai in Pudukkottai District.

Built by Aditya Chola in 9th century, this temple is located in the heart of the Viralimalai town. The temple lies on the Viralimalai hill, hence the town takes the name of the hill. This hill is small and rocky and there are 207 steps to reach the temple. On the way to the top, there are beautiful mandapas for devotees to rest.

The surroundings of this temple is filled with thick vegetation. This temple is specially known for the peacocks that are found in plenty. Within the premises of the temple, there is a statue of Kashyapa and Narada Muni along with several sculptures of Arumugan and Arunagirinathar on its pillars. At the foot of the hills the water tank called Saravana Poigai. On the eastern side there .....

#9 of 18 Places to Visit in Tiruchirappalli

At a distance of 500 m from Vayalur Bus Stand and 10.5 km from Trichy Railway Junction, Sri Subramanya Swamy Temple in Vayalur is one of the famous temples of Lord Murugan in Tamilnadu.

In the sanctum sanctorum, Sri Subramanian along with his consorts Valli and Devayani is seated on a peacock. Behind the main sanctum sanctorum, there is a temple for Lord Shiva. Lord Shiva here is said to be a Swayumbu lingam known as Agniswarar. Adjacent to Agniswarar is the shrine for his consort Sri Adi Nayaki and is known as Munnilai Nayaki. One of the special features about Lord Nataraja idol here is it has both its legs placed on the ground.

According to mythology, Lord Muruga worshipped Lord Shiva here. Lord Muruga created a tank here with his weapon to worship his parents. .....

#10 of 18 Places to Visit in Tiruchirappalli

At a distance of 2 km from Thiruverumbur Railway Station and 13 km from Trichy, Sri Erumbeeswarar Temple is a Hindu temple dedicated to Lord Shiva.

This temple is one of the group of shrines built by Aditya Chola along the banks of River Cauvery, to commemorate his victory over Pandyas during Tirupurambiyam Battle in 885 CE. The temple has several inscriptions from the Chola period dating back to the 10th century. The temple has been declared ŕ protected monument by the Archaeological Survey of India.

The temple enshrines Erumbeeswarar, another form of Lord Shiva as the presiding deity along with his consort Saurabhya Kudalaambal. This temple is built on a 60 ft high hill called as Malai Kovil and can be accessed by a plight of steps. Lord Shiva in this temple is believed to be self manifested. As it is a sand Lingam, no abhishekas are performed here.

According to the legend, there lived a demon Tharukasura, who was an ardent devotee of Lord Shiva, but was against .....