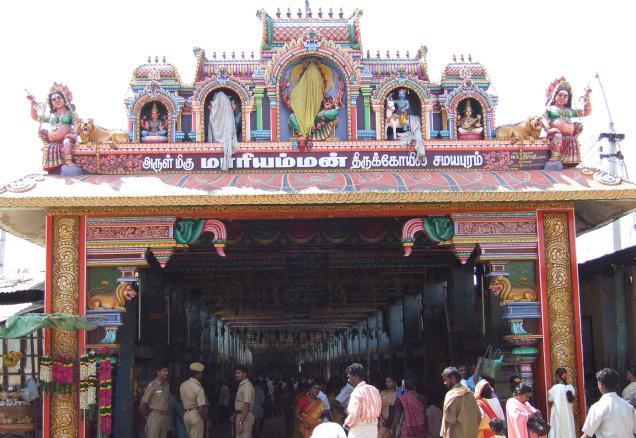 #4 of 18 Places to Visit in Tiruchirappalli

At a distance of 1 km from Samayapuram Bus Stand, 11 km from Srirangam, 19 km from Trichy, 66 km from Thanjavur & 317 km from Chennai, Sri Mariamman Temple situated at Samayapuram on NH-45 is one of the popular temples in the state of Tamil Nadu.

Sri Mariyamman Temple is dedicated to Samayapurathal or Mariamman, an incarnation of Goddess Shakti. The main deity in the sanctum is made of sand and clay and hence there are no abhishekams conducted to the main deity, but instead the abishekam is done to the small stone statue in front of it.

According to legend, the present deity was at the Ranganathaswamy temple at Srirangam, and one of chief priests of the temple believed that the idol caused him illness and hence asked it to be removed from the temple. It is a common belief that such local deities have immense powers and they must always be satisfied by proper offerings and sacrifices.

According to history, King Vijayaraya Chakaravarthi built the present day temple in 17th century. The Goddess Mariamman has enormous powers over curing illnesses and hence, it is a ritual to buy small metallic replicas made with silver or steel of various body parts that need to be cured, and these are deposited in the donation box. Devotees also offer mavilakku, a sweet dish made of jaggery, rice flour and ghee. Persons affected by Chickenpox and Smallpox come to this place, stay here and pray the Goddess for speedy recovery. Abisheka Theertham is sprinkled on them after Pooja.

Car festival (April- May) and Flower festival / Poochorithal (Feb-March) are very famous in this temple along with the festivals of Vaikasi (May-June) and Thai Poosam festival (January-February) associated with Srirangam.