#2 of 12 Places to Visit in Srikalahasti

Travel Tips: This place located near Sri Kalahastheswara Temple and can be visited along with the same.

At a distance of 2 Kms from Srikalahasti Bus Station, Swarnamukhi River is located near Srikalahasti Temple. When the hermits of Bilwaka grove pleaded with Sage Agastya on lack of water, he brought river Akash Ganga to the earth. As ordained by Lord Siva, Akash Ganga flowed as Swarnamukhi and sanctified the temple at Sri Kalahasti.

According to another legend, Lord Siva directed Sage Vashishta to proceed, along with Arundhati. Sage Vashishta finding that there was no water in the vicinity undertook a penance invoking Lord Brahma. Lord Brahma approached Lord Siva and told him about the cause of Sage Vashishta's penance. Thereupon Lord Siva unlocked Ganga from his matted hair and allowed her to follow Brahma. Gangadevi sparkling in golden hue rushed to the place where Sage Vashishta lived. Thus, the river here got its name Suvarnamukhi.

1 Must Visit Places in Srikalahasti 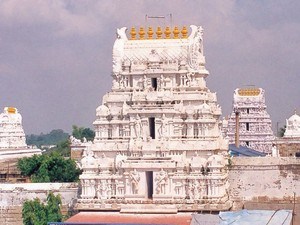 Places to Visit in Srikalahasti