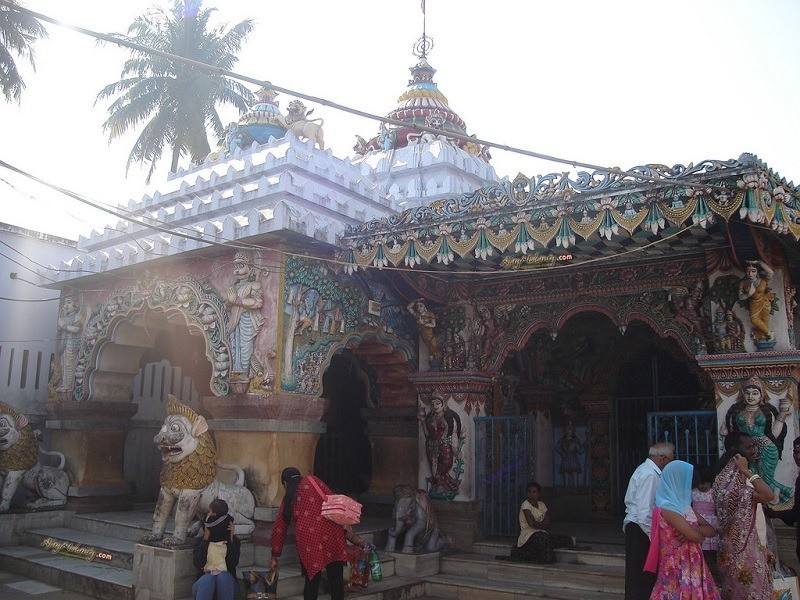 At a distance of 21 km from Konark, Maa Mangala Temple is a Hindu temple situated at Kakatpur in Puri district of Odisha. Also known as 'Sarba Mangala Mandir' and 'Bata Mangala Temple', it is one of the most renowned Shakti Peethas in Odisha and also one of the famous places to visit in Konark.

Goddess Mangala is the presiding deity of this temple. Built in 15th century, the temple is a symbol of the ancient heritage of Kalinga. According to legend, the Goddess Mangala kept herself hidden under the waters of the River Prachi. One day a boatman was unable to cross the river in full spate when Maa Mangala told him in a dream to recover her from the middle of the river and establish her in the village of Mangalapur. He dived and recovered goddess idol and built the temple. Later, the boatman saw a crow dive into the exact spot in the river from where the deity was recovered but the crow never came out. In local Oriya language 'Crow' means 'Kaka' and 'Detained' means 'Atka'. Thus the place is called as Kakatpur.

Built in typical Kalinga style, it is a major pilgrimage for devotees of Shakti cult. Pilgrims visit frequently to the temple to get the blessings from Maa Mangala. There is a bed made of solid stone on which it is said Maa Mangala rests after touring the entire universe every day. The bed looks worn out in just the same way it would if it were in use for centuries.

Kakatpur Mangala Temple has a close relation with Lord Jagannath temple of Puri during the Navakalebara (Renovation of the Deities) festival. Old deities are buried under earth and new idols are created with a sacred wood known as 'Daru Brahma' in local language. As per the tradition the priests of Lord Jagannath temple come to Kakatpur Mangala to pray the Goddess to give them divine guidance to find the sacred wood. The priests sleep in front of the Goddess and then Goddess Mangala come in their dream and tells the exact location of the three sacred trees for the three deities. This custom has been performed from years together without any deviation.

Jhamu Yatra is the most popular festival of Goddess Mangala which falls on the first Tuesday of the Vaisakh every year. On this occasion devotees collect water from River Prachi and pray to get her blessings. Then with the mud pot, filled with water, on their shoulder, they are able to walk on the surface of burning fire spread on a long channel on bare feet. Due to their faith on Goddess Mangala and Her blessings on them, the devotees are unhurt and uninjured while performing such a risky custom. Every year thousands of devotees come to Kakatpur to celebrate the Jhamu festival.