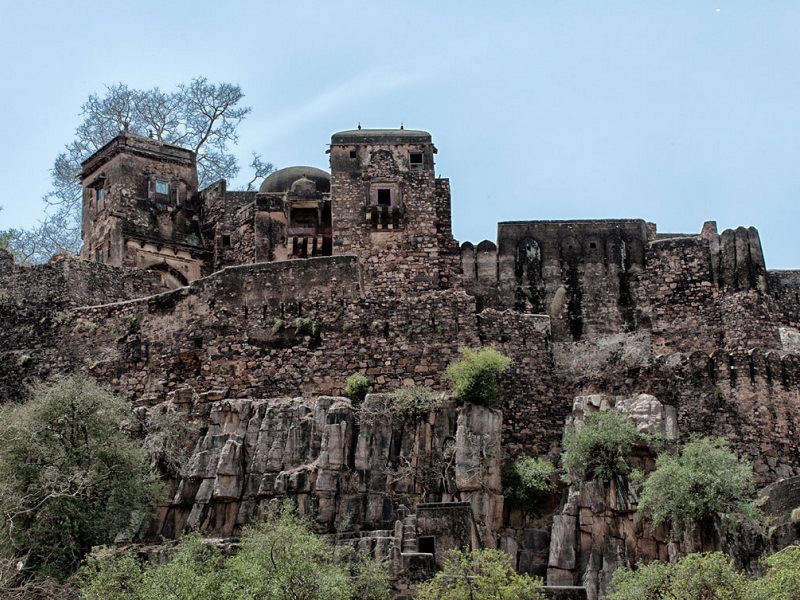 #2 of 14 Places to Visit in Ranthambore National Park

Ranthambore Fort, along with 5 other forts of Rajasthan, was declared a UNESCO World Heritage Site under the group Hill forts of Rajasthan in 2013. The exact origin of the Ranthambhore fort is still disputed but it is generally accepted that there was a settlement at the site of the fort, as far back as the 8th century AD. It is widely believed that the construction of the Ranthambhore Fort was started during the reign of the Chauhan Rajput king Sapaldaksha in 944 AD. The fort is known for the glory and valor of Hammir dev of the Chauhan dynasty. Aladdin Khilji conquered the Ranthambore Fort in the 13th century. After that Ranthambore Fort changed hands several times, till Akbar, the great Mughal emperor, finally took over the fort and dissolved the State of Ranthambore in 1558. The fort stayed in the possession of the Mughal rulers till the mid-18th century.

Located atop 700 ft high hill, the Ranthambore Fort possesses beautiful architecture and is situated in the middle of Vindhya and Aravali hills. The fort is huge and spreads across a vast area of around 7 km in circumference. The Ranthambore Fort is surrounded by massive stonewalls which are strengthened by towers and bastions. The main approach to the fort lies through a narrow valley, which had four fortified gateways. Of these, only the first gate - Misradhara gate, is still standing. Hammir's Court, Battis Khambha Chhatri, Hammir Palace, and Rani Palace are some of the ruined places inside the fort that one can visit as part of Ranthambore holiday packages. There are three Hindu temples dedicated to Ganesh, Shiva and Rama constructed in the 12th and 13th centuries from red Karauli stone. There is also a Jain temple of Lord Sumatinath and Lord Sambhavanath.

The Trinetra Ganesha Temple, which lies very close to the main entry gate to the fort, is the famous and oldest temple of Lord Ganesha in Rajasthan. This temple was built in 1300 CE by King Hammir Dev Chauhan. During an ongoing battle with Alauddin Khilji, King Hammir dreamt of Lord Ganesh promising him that the war would be over by the next day. In the morning an idol of Lord Ganesh with three eyes was found. King Hammir installed this idol along with Riddhi - Siddhi, and his two sons Shub and Labh. Every year in the month of September an annual fair is held on the occasion of Ganesh Chaturthi here and a large number of pilgrims visit the temple from all over the country.

Most of the visitors to the fort tend to stay in the western part of the fort. Very few visitors go to the eastern part of the fort, which is nearly wild. A small perennial stream called Gupt Ganga flows in this part of the fort. Visitors can watch a great number of bird species and langurs, the strange tiny cat, and sometimes, even leopards. The fort is one of the best places to look for the very rare and elusive fishing cat.

Ranthambore Fort can be visited separately without any permission by hiring a private cab or own vehicle. To reach the top of the fort from the main entrance, one needs to climb 600 odd steps.