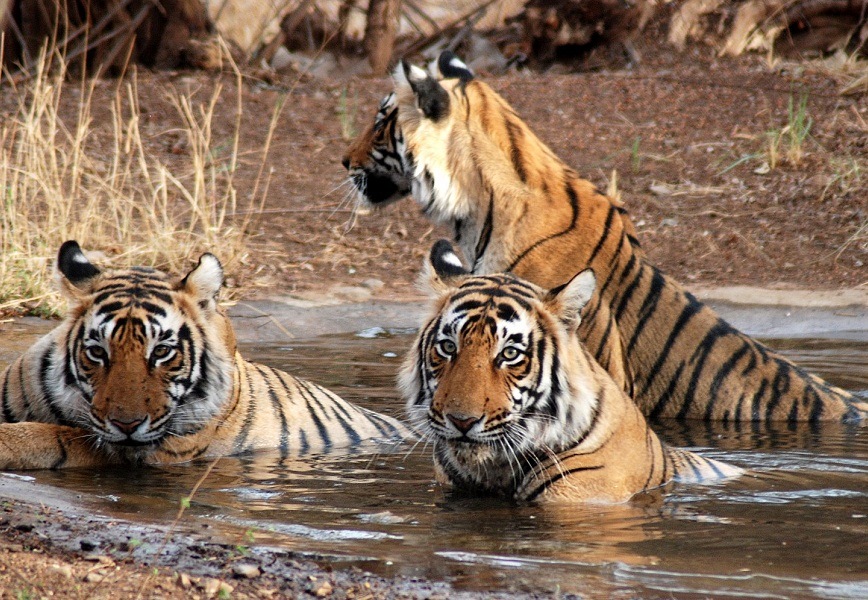 At a distance of 8 km from Sawai Madhopur, 140 km from Kota, 162 km from Jaipur, 268 km from Agra, 271 km from Ajmer, 368 km from Delhi, 413 km from Udaipur, and 448 km from Jodhpur, Ranthambore National Park is situated in the Sawai Madhopur district of Rajasthan. It is one of the largest and most renowned national parks in India, and among the must include places in Rajasthan tour packages.

Among the must include places in India wildlife tours, the Ranthambore National Park was once the hunting ground of the Maharajas of Jaipur. The rivers Chambal in the South and Banas in the North bound the Ranthambore National Park. The landscape of the park is formed of massive rock formations, steep scarps, perennial lakes, and streams. It is named after the historic Ranthambhore fortress, which lies within the park. The Padam Talab, Raj Bagh Talab, and Malik Talab are the prominent water bodies in the park.

Spread over an area of 392 sq. km, the park is majorly famous for its tigers and is one of the best locations in India to watch the majestic predators in its natural habitat. The park is divided into 10 zones for safari. Apart from tigers, visitors can also spot a large variety of animals including sloth bear, leopard, caracal, jackal, fox, hyena, mongoose, dainty chital, sambar deer, the blue bull antelope or nilgai, rhesus macaque, langur, and an incredible variety of birds as part of Ranthambore National Park tour packages. The park also has a large number of reptiles like snub-nosed marsh crocodiles, desert monitor lizards, tortoise, banded kraits, cobras, common kraits, Indian pythons, rat snakes, Russell's vipers, saw-scaled vipers, and the Indian chameleon.

Ranthambore is also counted as a famous heritage site because of the pictorial ruins that dot the wildlife park. Ranthambore Fort, Jogo Mahal, and Rajbagh are some of the best places to visit in Ranthambore National Park. Apart from the wildlife, visitors can also visit Trinetra Ganesh Temple, Rajiv Gandhi Regional Museum of Natural History, Kachida Valley, Ranthambore School of Art, Lakarda and Anantpura, and Bakaula at Ranthambore. This National park is a wildlife enthusiast and photographer's dream. It offers excellent accommodation and internal transportation facilities. Safari rides are added feature of the Ranthambore National Park. There are two options of vehicles for the safari: 20 seater open top canter or 6 seater open top gypsy. Each ride lasts for about three hours.

The nearest airport to Ranthambore is Jaipur which is about 148 km from Ranthambore. Sawai Madhopur Junction, which is about 8 km from the park, is located on the Delhi - Mumbai trunk route. It has good connectivity with Delhi, Jaipur, Indore, Ranchi, Ajmer, Udaipur, Agra, Kota, Puri, Bikaner, Ahmedabad, Mumbai, Chennai, Coimbatore, Mysore, Jodhpur, Hyderabad, Amritsar, Haridwar, Lucknow, Guwahati, Trivandrum, Patna, Dehradun, and Bhopal. Sawai Madhopur Bus Stand is the nearest bus station, which is about 9 km from Ranthambore National Park which has direct bus connectivity with Udaipur, Jaipur, Alwar, Jodhpur, Ajmer, Kota, and Tonk.

The park remains open every year from October to June and closed during monsoon season from July to September. The best visiting season of Ranthambore National Park is during the months of March - May.

#1 of 14 Places to Visit in Ranthambore National Park

Ranthambore National Park is divided into 10 safari zones. One can select their preferred zone 90 days before at the time of safari booking. After 90 days required safari zones are subject to availability. All safari zones are best and designed by the forest department there is no bad zone in Ranthambhore Tiger Reserve. But, zones 1 to 6 are the popular zones for tiger sighting as part of Ranthambore packages.

Safari booking at Ranthambhore National Park is controlled by the Department of Forest (Govt. of India). There .....

#2 of 14 Places to Visit in Ranthambore National Park

Ranthambore Fort, along with 5 other forts of Rajasthan, was declared a UNESCO World Heritage Site under the group Hill forts of Rajasthan in 2013. The exact origin of the Ranthambhore fort is still disputed but it is generally accepted that there was a settlement at the site of the fort, as far back as the 8th century AD. It is widely believed that the construction of the Ranthambhore Fort was started during the reign of the Chauhan Rajput king Sapaldaksha in 944 .....

#3 of 14 Places to Visit in Ranthambore National Park

The Padam Talao is a favorite watering hole of the animals of Ranthambore. Tigers, Leopards, Deer, Monkeys and Peacocks can be seen drinking at the lakes edge during the early morning and late evening. Machans or huts on observation posts near the Padam Talao are an excellent platform from where visitors can see the animals in their natural habitat. Genghis, one of the legendary tigers of Ranthambore was famous for hunting deer that came to the lakeside to drink.

The hunting lodge called Jogi Mahal is situated on the banks of the Padam Talao. The view from the Jogi Mahal is a splendid one. Jogi Mahal was built by the royal families of Jaipur and served as a hunting abode to various generations of Jaipur Maharajas. After the decline .....

#4 of 14 Places to Visit in Ranthambore National Park

The Rajbagh Talao is an important source of food and water for many of the herbivorous inhabitants of Ranthambore. The major attractions of the place is the animals that seem to always flock to its waters and also see the large population of animals and birds feeding in it. The lake is partially covered with marshy plants. Sambar, Chital, Nilgai and Blackbuck are seen drinking alongside, peacocks, and wild boar. Tigers are often seen stalking the deer that come to drink and feed in the Rajbagh Talao.

The Rajbagh ruins located along the banks of the lake add to its exotic ambience. The ruins of these structures consist of broken down rooms and outhouses with arches, partly standing walls and domes. The majestic tigers of Ranthambore .....

#5 of 14 Places to Visit in Ranthambore National Park

At a distance of 3.5 km from Ranthambore National Park and 6.5 km from Sawai Madhopur Railway Station, the Rajiv Gandhi Regional Museum of Natural History is a museum situated at Ramsinghpura village of Sawai Madhopur in Rajasthan. It is the fourth Regional Museum of Natural History in India after Mysore, Bhopal and Bhubaneswar.

The honourable Vice President of India, Hamid Ansari laid the foundation of Rajiv Gandhi Regional Museum of Natural History in December 2007 and was inaugurated in 2014. The museum was undertaken by the Ministry of Environment and Forests, Government of India. Spread in 7.2 acres of land, the museum is tastefully designed and aims at creating awareness of diverse life on earth.

There are three floors in the museum, with exhibits on plants, livestock, mineral resources and geology of the western region and western dry area of India. As if now, only the ground floor is operational with a well-laid exhibition on the wildlife in Ranthambore and the famed .....

#6 of 14 Places to Visit in Ranthambore National Park

Enclosed by low jagged hills, and dotted by revitalizing greenery, Kachida Valley is one of the picturesque and a must-visit place in Ranthambore. It is blessed with wide range of flora and fauna species. This area contains a majority of the Panther population of the park. The Panthers avoid venturing into the main jungle to avoid conflicts with tigers, which are known to kill them. Tourists can also see a variety of sloth bears and deer in this valley. Visitors will have to reach this valley via the jeep safari.

#7 of 14 Places to Visit in Ranthambore National Park

Bakaula is amongst the coolest places in Ranthambore area due to its dense populace of trees and many water holes, small pools and other water bodies that are scattered in plenty here. The thick vegetation also retains moisture in the air and lowers the temperature of this area. Because of the excellent forest cover and availability of water, the Bakaula region in Ranthambore National Park has an abundance of wildlife like birds, squirrels, mongoose and monkeys. This region is also famous for many lions and one can often spot mummy tigers with their cubs roaming around leisurely.

Tourists can visit this place only as part of wildlife safari.

#8 of 14 Places to Visit in Ranthambore National Park

Malik Talao is best known as a haven for birds and it attracts a large number of visitors. The lake is quite important to the wildlife of the park as it serves as the source of water and food for the animals and birds inhabited there. This small yet scenic lake is also home to the Marsh Crocodiles. Herds of wild boar and groups of peacocks, eagles and various migrated birds can be seen browsing along the banks of the lake. Kingfishers, egrets, herons, ibis, storks and cranes are some of the commonly spotted birds at Malik Talao making it the perfect place for bird watching in Ranthambore.

Tourists can visit this lake during their Jungle safari only.

#11 of 14 Places to Visit in Ranthambore National Park

At a distance of 2.5 km from Sawai Madhopur Railway Station and 9.5 km from Ranthambore National Park, Sri Chamatkarji Temple is a Jain temple situated in Rajasthan. It is one of the holiest destinations for the Digambara Jains and also one of the best Ranthambore places to visit.

The Chamatkarji Temple has been named so because several fascinating miracles were linked to its foundation. According to history, this temple belonged to a simple farmer who had found God's idol when he dug up a particular place in the field after being directed by God in his dream. The idol was given over to the Jain Digambaras. The legend further goes to say that the same farmer was again told by God in his dream to place the idol in a chariot and leave it to see where the horse refuses to move further. That place was chosen as the site of the temple. Thus Chamatkar Temple came to be built in Sawai Madhopur. .....

#12 of 14 Places to Visit in Ranthambore National Park

Lakarda and Anantpura are located in north-western and northern region of Ranthambore National Park. These regions are known for their teeming population of Sloth bears as various sources of food like honeycomb and fresh fruits are available for them. Several species of monkeys and porcupines can also be spotted in the region making it a must visit spot for the wildlife enthusiasts and shutterbugs.

It is one of those few places in this wildlife reserve, where the pugmarks of the Indian striped Hyenas can be seen. This species of hyena has a very small population in the jungle and Lakarda and Anantpura are amongst those few spots where there is a possibility of sighting these otherwise rare species.

Morning is the best time to explore this hill in Ranthambore and study the natural lifestyle of .....