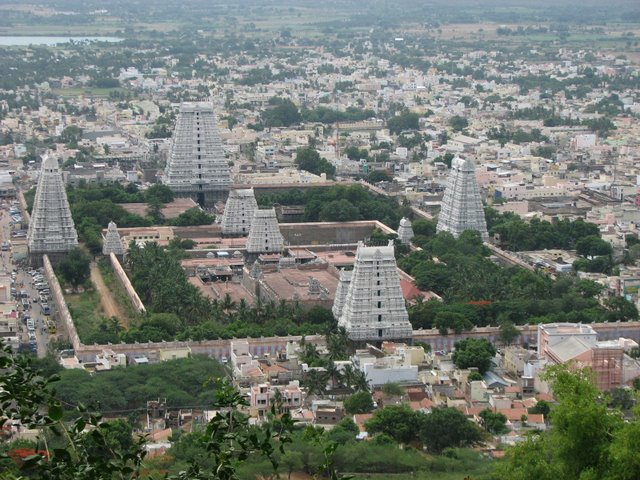 #11 of 14 Places to Visit in Kanchipuram

At a distance of 83 km from Vellore, 120 km from Kanchipuram, 195 km from Chennai, and 204 km from Bangalore, the Arunachaleswara Temple is a sacred Hindu shrine situated at Thiruvannamalai near Kanchi in Tamilnadu. It is one of the greatest Shaiva places of pilgrimage in South India and among the most popular temples to visit near Bangalore & Chennai.

Also known as Annamalaiyar Temple, Arunachala Temple is a breathtaking temple complex dedicated to Lord Shiva. This temple was constructed by Vijayanagara kings between 16th and the 17th centuries. It is significant to the Hindu sect of Saivism as it is one of the pancha bhoota sthalams, which are dedicated to the manifestation of five natural elements. Legend has it that the Lord has manifested himself as an element of fire or Agni in this temple. The temple is believed to be the eighth-largest Hindu temple in the world, and among the must include places in Kanchi tour packages.

Spread over 25 acres, Arunachaleswarar Temple is an imposing structure built in the traditional Dravidian style of architecture. It boasts four gateway towers known as gopurams, each of which is encompassed with mandapams, shrines, and enclosures, decorated with finely carved sculptures and pillars. The eastern tower with 11 storeys, stands at a height of 66 m and is one of the largest temple towers in India. Shiva is worshiped as Arunachalesvara or Annamalaiyar, and is represented by the lingam, with his idol referred to as Agni lingam. His consort Parvati is depicted as Unnamalai Amman. It is said that visiting this temple and offering prayers with a clean heart will absolve one's sins.

Brahmotsavam celebrated in the Tamil months of Karthikai (between November and December) is the most significant festval here. Besides, Tiruvoodal which occurs around mid-January every year is another prominent festival celebrated with great enthusiasm. This festival involves worshipping Nandi, Shiva and Parvati. The deities are taken out of the temple to enact the love tiff (also known as oodai) in the evening.