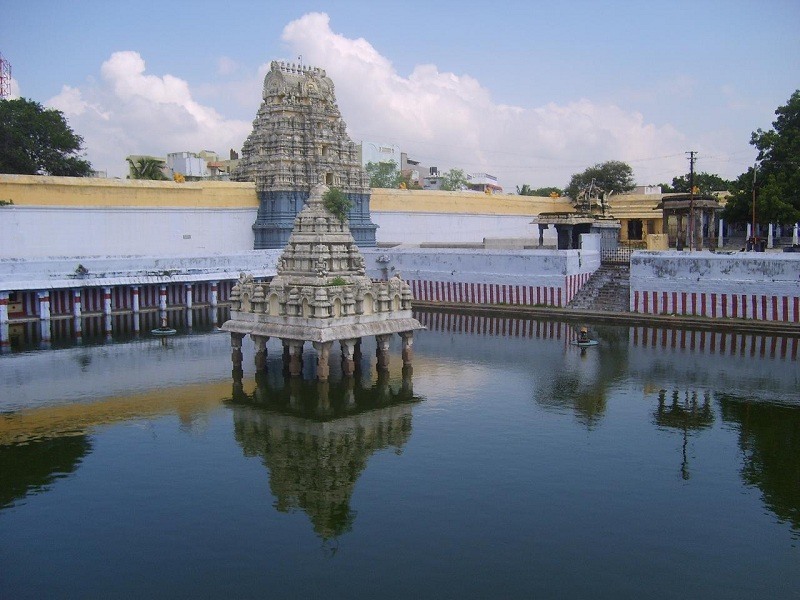 Peak Season: July to August & May to June

At a distance of 68 km from Vellore, 65 km from Mahabalipuram, 75 km from Chennai, 108 km from Tirupati & 127 km from Pondicherry, Kanchipuram or Kanchi is a temple town and the headquarters of Kanchipuram district. It is one of the most popular weekend getaways from Chennai and among the major places to visit in Tamilnadu.

Kanchipuram is one of the most famous places of pilgrimage in Tamilnadu. Kanchipuram has a rich history and it's one of the oldest cities in India. The temples of Kanchipuram are known for their grandeur and great architecture. The architecture of Kanchi monuments was trendsetting with great sculpture work and unique style and became a benchmark for South Indian architecture. This is another popular attraction to visit as part of Chennai tour packages.

The city served as the capital of the Pallava Dynasty, and most of the known temples were built during their reign. From the 3rd to the 9th century CE, Kanchi was the capital of the Pallavas who ruled over the territory extending from the river Krishna in Andhra Pradesh to the river Kaveri in the south. The Pallavas fortified the city with ramparts, moats, etc., with wide and well laid out roads and fine temples. They were a great maritime power with contacts with far-off China, Siam, Fiji, etc., through their chief Port Mamallapuram, the modern Mahabalipuram. The Cholas ruled this town from the 10th century to the 13th century after the fall of Pallavas. Kanchi came under the control of the Vijayanagara kingdom from the 14th century to the 17th century and was controlled by the British from the end of the 18th century.

Located on the banks of the Palar River, Kanchi is well-known for its temples and silk sarees which are woven manually. Kamakshi Amman Temple, Varadharaja Perumal Temple, Kailasanathar Temple, Karchapeshwarar Temple, and Ekambaranatha Temple are the top places to visit in Kanchi as part of Kanchi Tour Packages. Ekambaranatha Temple is one of the five forms of abodes of Lord Siva, (it is the earth abode here, other abodes include Chidambaram (Sky), Sri Kalahasti (air), Thiruvanaikoil (water), and Tiruvannamalai (fire)).

About 61 km from Kanchi, Chennai Airport is the nearest airport that has regular flight connectivity with almost all the major cities in India, as well as abroad. Kanchi is well-connected by trains with Chennai, Pondicherry, Kanyakumari, Mumbai, Tirupati, Madurai, Dindigul, and Tirunelveli. There are frequent buses to Kanchipuram from Chennai, Vellore, Tirupati, Bangalore, Coimbatore, Madurai, Trichy, etc.

October to March is the best time to visit Kanchipuram when the weather is pleasant and suitable for sightseeing. During the rest of the year, it is mostly humid and hot apart from the monsoons where the town experiences heavy rainfall.

How to Reach Kanchipuram - Full Details

Top 10 Places to Visit in Kanchipuram

#1 of 14 Places to Visit in Kanchipuram

The Kamakshi Temple is dedicated to Kamakshi, who is believed to be an incarnation of Parvati, the Hindu goddess of love, fertility, and strength. It is one of the prominent pilgrimage sites near Chennai. It is one of the 51 Shakti Peethas, which are sacred shrines built around the falling body parts from the corpse of Goddess Sati from heaven. It is believed the naval part of her body fell at this site, thus making it a holy abode.

The Temple was most probably built by the Pallava kings, whose capital was Kanchipuram. .....

#2 of 14 Places to Visit in Kanchipuram

At a distance of 1 km from Kanchipuram Bus Station and 1 kms from Railway Station, Vaikuntha Perumal Temple, Kanchipuram is one of the most important temples dedicated to Lord Vishnu.

It was built by the Pallava king Nandivarman and was completed in the 7th century A.D. There are three different levels of the main shrine. There are a number of sculptures of Lord Vishnu which are quite massive in size depicting the Lord in sitting, standing and reclining postures.

One of the main attractions of this temple is the exceptional 1000-pillared hall. The unique characteristic about it is that each pillar has a statue carved on it. Lion pillars support the enclosed passages inside the temple. The architecture of the temple has played a vital role in the architectural evolution of the grand thousand pillared mandaps built in the later south Indian. There are several inscriptions in the temple related to the wars between Pallavas and Chalukyas.

#3 of 14 Places to Visit in Kanchipuram

At a distance of 2 km from Kanchipuram Bus Station and 3 kms from Railway Station, Sri Ekambareswarar Temple is also known as 'Ekambaranathar Temple' (temple of Lord Shiva). The 'Pallavas' demolished the old structure and rebuilt the existing structure during 600 AD and 700 AD.

The total area of the whole temple is about 40 acres. The temple tower at the main entrance (Raja Gopuram) that you see here was constructed by the king Krishnadevaraya (Vijayanagar Dynasty). The height of this temple tower is 174 feet (about 57 m).

Until recently there was a mango tree in this temple, which was about 3500 years old. The tree has perished about 2 years ago due to its age. It is believed that Goddess Kamakshi Amman, whose temple is about 1/2 km away from here, worshipped Lord Shiva under this mango tree.

#4 of 14 Places to Visit in Kanchipuram

At a distance of 3 km from Kanchipuram Bus Station and 4 km from Railway Station, the Kailasanathar temple (Shiva Temple) is an ancient Hindu temple situated in the sacred town of Kanchipuram in Tamil Nadu. Located on the banks of the Vedavathi River, it is one of the oldest Shiva temples in Tamilnadu, and among the must include places in Kanchi tour.

Dedicated to Lord Shiva, the Kailasanathar Temple holds great significance and value for the Hindu devotees and is visited by a large number of tourists all year round. It was built during the period from 685 AD to 705 AD by the Pallava king Rajasimha Pallava, and his son, Mahendra Varma Pallava. The architecture and sculpture of this temple resembles the temples found in Mamallapuram (Mahabalipuram) which were also constructed by Pallavas. This might be the only temple in .....

#5 of 14 Places to Visit in Kanchipuram

At a distance of 3 km from Kanchipuram Bus Station and 4 kms from Railway Station, Sri Varadaraja Perumal Temple is also known as Devarajaswami Temple. This temple is dedicated to Lord Vishnu.

The 100 ft high temple tower (gopuram) was built in 11th century AD and was renovated by the Vijyanagar Kings in the 16th century. This temple has a 100 pillar hall (mandapam) which is beautifully carved. There is a chain that is carved out of a single stone.

The temple owns a chariot (ther) which is parked on Gandhi road. The chariot is taken out for procession (chariot festival) around the city once in a year (during the month of May).

#6 of 14 Places to Visit in Kanchipuram

At a distance of 13 km from Puttur, 25 km from Nagari, 46 km from Tirupati, 92 km from Chennai, 76 from Chittoor, 86 km from Kanipakam, 85 km from kanchipuram and 110 km from Vellore, Kailasakona Waterfalls are a natural perennial waterfall in the valley of Nagari hills in Chittoor District. The water originates from the split in a mass rock.

The height of the waterfalls is about 30 meters and it cascades down into a small pond below the rock. The water here is crystal clear having considerable mineral values & medicinal powers and can heal ailments. The tourists are not allowed to go uphill to the top of the falls.

#7 of 14 Places to Visit in Kanchipuram

Dr. C.N. Annadurai, the former Chief Minister of Tamil Nadu and the founder of D.M.K. was born in Kanchipuram. His ancestral house has been converted into a memorial. Various exhibits like photographs, the articles used by him and important events of his life are exhibited here. As he is associated with the Dravidian movement and the nationalist movement one can see the evolution of these important movements which made a breakthrough in the lives of the Tamils who hailed him as their elder brother 'Anna'.

#8 of 14 Places to Visit in Kanchipuram

At a distance of 7 kms from Kanchipuram (near Pillayarpalayam), Thirupparuthikunram is famous for two ancient Jain temples.

There are two temples dedicated to Vardhaman Mahavir and Chandra Prabha. The Vardhaman Mahavir Temple dates back to 6th century.This temple was enlarged during Chola period.The temple houses a great idol of Bhagwan Mahaveer. The height of the idol is about 6 feet and is in sitting posture. There are a series of paintings which belongs to the 14th and 17th centuries in the Sangeetha mandapa, built by Irugappa, the Vijayanagara minister in 1387 AD.

Chandra Prabha Temple is said to have been built during Rajasimha Pallava's reign in the 8th century AD. Tirthankara 'Chandraprabha' is the main deity in this temple. There is a (Tharmakura) tree here, which is about 2000 years old.

Both the temples are maintained by Tamil Nadu State Archaeology Department.

#9 of 14 Places to Visit in Kanchipuram

At a distance of 13 km from Arakkonam, 44 km from Kanchipuram, 86 km from Chennai and 65 km from Tirupati, Thiruthani is a holy town located in Tiruvallur District of Tamil Nadu and is famous for the Murugan Temple. This temple is one among the six Padai Veedus (Battle Grounds) of Lord Murugan, other five are Palani, Swamimalai, Tirupparangunram, Pazhamudircholai and Thiruchendur. This place represents the site where Subramanya stayed after destroying the demon Surapadman.

Tiruttani is also said to be the place where the Lord Subramanya married Valli - one of his two consorts. This temple has been mentioned in the Sangam period work Tirumurugaatruppadai composed by Nakkeerar. According to legend, Devayani, daughter of Indra married Lord Murugan and was presented Indra's elephant Airavatam as part of his dowry offering. Upon Airavatam's departure Indra found his wealth waning. Lord Subramanya is said to have offered to return the white elephant, however Indra refused to accept a .....

#10 of 14 Places to Visit in Kanchipuram

At a distance of 57 km from Chennai, 65 km from Kanchipuram, 96 km from Pondicherry, 420 km from Madurai, and 290 km from Trichy, Mahabalipuram (also called Mamallapuram) is situated in Kanchipuram district of Tamil Nadu. It is one of the major heritage sites in Tamilnadu, and one of the best places to experience Tamilnadu Tourism.

Mahabalipuram is known for its historical monuments, sculptures, scenic beauty, culture, and tradition. Built-in 7th century CE, shore temples are the prominent attractions that can be visited as part of Mahabalipuram tour packages. These temples built largely during the reigns of Narasimha Varman and his successor Rajasimha Varman, showcase the movement from rock-cut architecture to structural buildings. The mandapas and the rathas shaped as temple chariots are made from the granite rock face, while .....