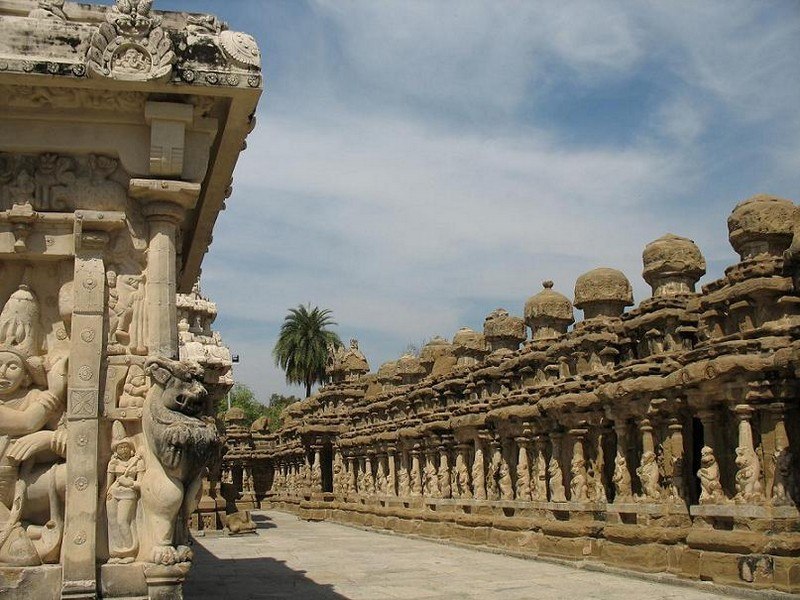 #4 of 14 Places to Visit in Kanchipuram

At a distance of 3 km from Kanchipuram Bus Station and 4 km from Railway Station, the Kailasanathar temple (Shiva Temple) is an ancient Hindu temple situated in the sacred town of Kanchipuram in Tamil Nadu. Located on the banks of the Vedavathi River, it is one of the oldest Shiva temples in Tamilnadu, and among the must include places in Kanchi tour.

Dedicated to Lord Shiva, the Kailasanathar Temple holds great significance and value for the Hindu devotees and is visited by a large number of tourists all year round. It was built during the period from 685 AD to 705 AD by the Pallava king Rajasimha Pallava, and his son, Mahendra Varma Pallava. The architecture and sculpture of this temple resembles the temples found in Mamallapuram (Mahabalipuram) which were also constructed by Pallavas. This might be the only temple in Kanchipuram which has not been modified after its original creation.

The architecture of the temple is an excellent example of the Dravidian style of construction, and the temple is carved out of sandstone. The architectural beauty of this temple is remarkably different from that of all the other temples in Tamil Nadu. The temple has fifty-eight small shrines in all, which are built into the niches of the compound wall that encloses the main shrine. The main shrine depicts the carvings of Goddess Parvati and Lord Shiva in various dance forms. Other than these mini shrines, one can also find the main hall, a high compound wall, and an entrance gate known as the gopuram, inside the temple complex.

The main shrine, or the sanctum sanctorum, comprises 16 Shivalingas made in black granite. Both the inner and outer walls are carved with the images of many Gods and Goddesses such as Brahma, Vishnu, Nandi, Durga Maa, and Lord Shiva in the destructive dancing pose. A sculpture of Nandi can also be found guarding the entrance. The south-facing wall of the temple has a very graceful image of Lord Shiva in a seated posture and quietude, which is known as Dakshinamurti; while the west wall has Shiva in the form of Lingodhbav. It is one of the important places to visit in Kanchi.