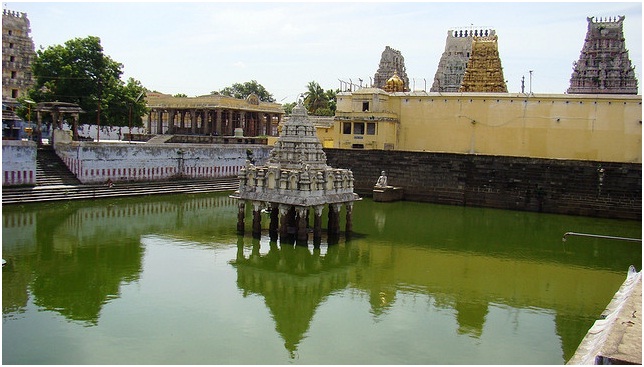 #1 of 14 Places to Visit in Kanchipuram

The Kamakshi Temple is dedicated to Kamakshi, who is believed to be an incarnation of Parvati, the Hindu goddess of love, fertility, and strength. It is one of the prominent pilgrimage sites near Chennai. It is one of the 51 Shakti Peethas, which are sacred shrines built around the falling body parts from the corpse of Goddess Sati from heaven. It is believed the naval part of her body fell at this site, thus making it a holy abode.

The Temple was most probably built by the Pallava kings, whose capital was Kanchipuram. While the Chola and Vijaynagar kings later expanding by adding smaller shrines around the main temple. This sanctum of Kamakshi is one of the three important places of worship for the Goddess Shakti, the other two being Madurai Meenakshi and Kasi Visalakshi in Varanasi. According to a local legend, Adi Shankaracharya established the Sri Chakra in this temple. It is one of the important Kanchipuram places to visit.

The magnificent temple has a multi-layered structure spread over an area of 5 acres. The sannathi (sanctum) is covered with a gold-plated roof. The sanctum houses the image of Kamakshi in a seated posture and is flanked by the trinity of Shiva, Vishnu, and Brahma. She holds a sugarcane bow in her upper left arm, a parrot in her upper right arm, divine chakras of Pasa, and Ankusha in her lower arms. There are smaller shrines of Bangaru Kamakshi, Adi Shankara, and Maha Saraswathi around the sanctum. A large tranquil pond adds serenity and peace to the environment. The temple has a golden chariot of which the procession takes place during festive seasons.

Even most of the locals are unaware of the fact that there are no shrines for Shakti in any of the Shiva temples in Kanchipuram. The Kamakshi temple is the only traditional temple dedicated to Shakti in Kanchipuram.

Chariot Festival and Float Festival held in the Tamil month of Masi (February/March) are the famous festivals celebrated here annually. During these festivals, the Goddess Kamakshi is taken out of the sanctum for a procession, seated in a silver chariot. Other major festivals such as Navratri, Rath Yatra, Sankara Jayanti, Aadi, and Aippasi Pooram are also celebrated with equal enthusiasm.