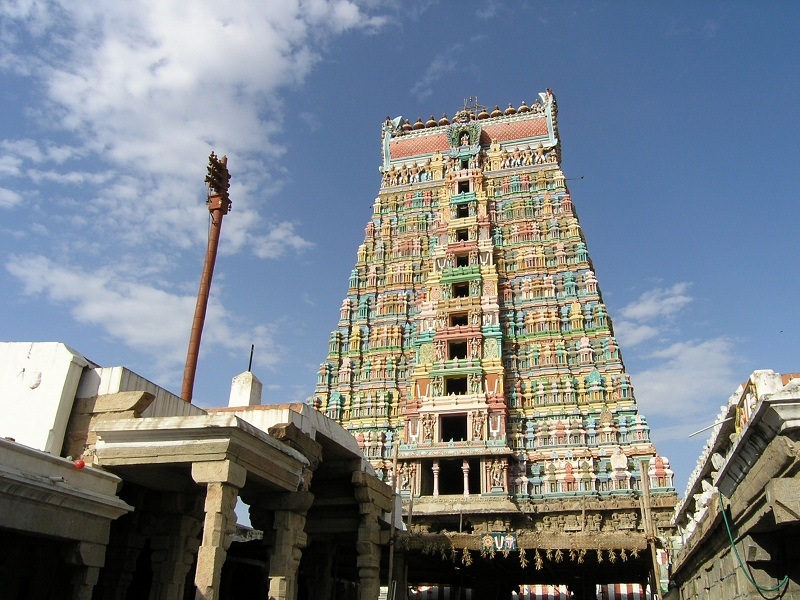 At a distance of 80 km from Madurai and 100 km from Tirunelveli, Srivilliputhur Andal Temple is an ancient Hindu temple situated at Srivilliputhur in Virudhunagar district of Tamilnadu. This is one of the popular temples in Tamilnadu and also one of the 108 divya desams of Lord Vishnu. The 11 tier Raja gopuram is the tallest in Tamilnadu and is also the Emblem of Tamil Nadu Government.

The temple is dedicated to Lord Vishnu, who is worshipped as Vatapatrasayi and his consort Lakshmi as Andal. It is believed to be the birthplace of two of the Alwars, namely Periazhwar and his foster daughter Andal. The Alwars lived in 8th century, so that the existence of the temple can be traced even before. Vatapatra Sayanar Temple was constructed by the King Villi who ruled the place. The tall temple tower was constructed by Peria Alwar with the help provided by the Pandian king Vallabadevan (765-815 AD). The Andal Shrine had been constructed by different kings of Pandya dynasty at different times. King Thirumalai Nayak had done many renovations.

Srivilliputhur Temple is associated with the life of Andal, who was found under a Tulsi plant in the garden inside the temple by Periazhwar. She is believed to have worn the garland before dedicating it to the presiding deity of the temple. Periazhwar, who later found it, was highly upset and stopped the practice. It is believed Vishnu appeared in his dream and asked him to dedicate the garland worn by Andal to him daily, which is a practice followed during the modern times. It is also believed that Ranganatha of Srirangam married Andal, who later merged with him.

The temple consists of two parts. The first part is called Vatapatra Sayanar Temple and the second part is known as Andal Shrine. A granite wall surrounds the temple, enclosing all its shrines, the garden where Andal was found and two of its three bodies of water. The greatest attraction of the temple is the Rajagopuram with eleven tiers and 192 feet height. It is one among the tallest towers of temples in Tamilnadu. It is also the Emblem of Tamil Nadu Government.

In the sanctum sanctorum the idol of the Lord in a reclining posture, his consorts Sridevi and Bhoodevi, are shown attending to him at his feet. Sage Bhrigu stands near his head and Markandeya is near his feet. The banyan tree whose leaf is known as Vatapatram, on which the Lord is said to rest in the form of a baby during deluge, is at his head. Images of Panchamurtis, Thumburu, Narada, Sanatkumara, Kinnara Mithuna, the Sun and the Moon are shown all around the Lord as well as representations of Villi and Puttan, who stand reverently at his feet. The sanctum sanctorum has three doorways from which the Lord can be seen in His reclining posture. A flight of stairs leads to the sanctum sanctorum; below them is a large, impressive hall with detailed wooden carvings depicting incidents from the Puranas.

The Chitritsavam for 9 days, Aadi Pooram, Vasantha Utsavam, Peria Perumal Bramhotsavam, Theppostavam and Andal Mannar Thirukalyanam for 10 days are the important festivals celebrated in this temple with great pomp and fervor.