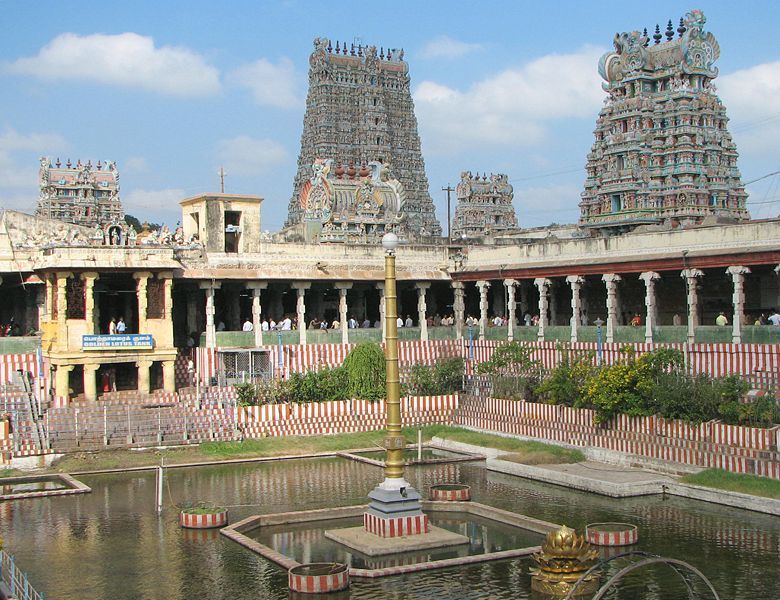 Peak Season: January to February & May to June

At a distance of 114 km from Kodaikanal, 136 km from Trichy, 169 km from Thanjavur, 170 km from Rameswaram, 209 km from Coimbatore, and 464 km from Chennai, Madurai is the third-largest city in Tamilnadu. It is one of the most famous places of pilgrimage in Tamilnadu, and among the must-visit places as part of Madurai packages.

Situated on the banks of the River Vaigai, the city is very well known for Madurai Meenakshi Temple, among the most famous places to visit in Madurai. Often referred to as Athens of the East, Madhurai is the oldest continually inhabited city in the Indian peninsula with a history dating back to the Sangam period of the pre-Christian era. It has been inhabited since at least the 3rd century BCE. It is considered the cultural capital of Tamilnadu.

Madurai was the seat of power of the Pandyan Empire. It was built by the Pandyan king Kulasekhara and was the capital city of the great Pandya kings of South India. It was later ruled by Cholas, Later Pandyas, Madurai Sultanate, Vijayanagara, Madurai Nayaks, and finally British. Pandyas and Nayaks contributed enormously to the development of Meenakshi Amman Temple and Madurai city.

Meenakshi Temple is the biggest landmark of Madurai. It is one of the largest temples in India. The temple has stunning architecture and a significant testimony for Vishwakarma Brahmins for their master architecture in sculpting this temple. The core city of Madurai is built parallel to the streets of Madhurai Temple. Besides, Thirumalai Nayak Mahal & Koodal Alagar Temple are other important places to visit in Madurai. Madurai is also a base station to visit Trichy, Thanjavur, Rameswaram and Kodaikanal.

The Sangam period poet Nakkeerar is associated with some of the Tiruvilayaadal episodes of Sundareswarar - that are enacted as a part of temple festival traditions even today.

About 10 km from Madurai, Madurai airport has regular flight connectivity with cities like Chennai, New Delhi, and Bengaluru. Madurai Railway Station is well-connected by trains from all the major cities of India. Madurai has several bus stations. Most of the long-distance buses and inter-state buses start from Mattuthavani Bus Terminus (8 km from Railway Station). Buses to Chennai, Bangalore, Trichy, Rameswaram, Thanjavur, Tirupathi, etc. start from here. Arappalayam Bus Station is another major bus station (3 km from Railway Station) with connectivity to Kodaikanal, Palani, Theni, Dundigal, etc. Periyar bus station near Railway station is the hub for local city buses.

Though a year-round destination, Madurai is best visited during the winter months from October to March. This is also the time to witness the popular harvest festival Tamilnadu, Pongal which is regarded as an extremely special festival in Madurai. Better to avoid visiting Madurai in summer when the weather is uncharacteristically hot, and dry.

How to Reach Madurai - Full Details

Top 10 Places to Visit in Madurai

At a distance of 2 km from Madurai Junction Railway Station, the historic Meenakshi Sundareswarar Temple also called Meenakshi Amman Temple, is a sacred Hindu temple located in Madurai. It is one of the biggest and most popular temples in India, and among the must-visit places as part of Madurai trip.

Dedicated to Goddess Parvati and Lord Siva, the temple is considered an architectural marvel. It was shortlisted as one of the top 30 nominees for New Seven Wonders of the World. It is one of the the prime places to visit in Madurai. The Madurai temple forms the heart and lifeline of Madurai city which is 2,500 years old.

The original temple was built by Kulasekara Pandya, but the initiative to rebuild the structure was taken by the first Nayak king of Madurai, Viswanatha Nayak (1559-1600) under the .....

At a distance of 3 km from Madurai Junction Railway Station and 1 km from Meenakshi Temple, Thirumalai Nayak Mahal is an ancient palace situated in Madurai. It is one of the popular places of heritage in Tamilnadu, and among the major Madurai tourist places.

Thirumalai Nayak Mahal was constructed in the Indo-Saracen style by Thirumalai Nayak in the year 1636. After Independence, this palace was declared as a national monument and to date continues to be one of the spectacular monuments of Southern India. It is one of the must include places in Madurai packages. The original palace complex was four times bigger than the present structure. The palace was designed by an Italian architect.

At a distance of 1 km from Madurai Junction Railway Station & 1.5 km Meenakshi Temple, The Koodal Alagar Temple, also known as Arulmigu Koodalazhagar Thirukoil, is another important temple in Madurai and among prime sightseeing to be included in your Madurai Trip. Dedicated to Lord Vishnu, this temple is believed to be older than the Meenakshi temple. It is one of the important places to visit in Madurai.

At a distance of 8 km from Madurai Junction Railway Station, Thiruparankundram Temple, also known as Tirupparamkunram Murugan Kovil is renowned for its 8th century rock cut cave temple dedicated to Lord Murugan (Subrahmanya). It is one of the major sacred places to visit in Madurai.

Tirupparankundram Temple is one of the six abodes of Murugan and considered as the first and foremost temple of Lord Muruga. Several myths and legends are associated with this temple and one of them says that it is at this place that the Lord Muruga defeated the demon Surapadman and got married to Deivayani, daughter of the king of heaven, Indra and worshipped Lord Shiva.

The main shrine is an early rock cut temple which has cells that house the sanctums of Subramanya, Durga, Vinayakar, Shiva and Vishnu. There are several mandapas in this temple known as Kambathadi Mandapam, Ardha Mandapam, and Mahamandapam situated at different levels connected by steps. There are several architectural features .....

At a distance of 21 km north-east of Madurai, Alagar Koil is a beautiful temple dedicated to Lord Vishnu situated on a picturesque wooded hill. It is one of the major temples in Tamilnadu and an important pilgrimage site near Madurai city.

The temple is the abode of Lord Vishnu and is the sacred place for several followers of Lord Vishnu in the region. It is situated in the Alagar hills and is also known as Azhagar Kovil. Here 'Vishnu' presides as Meenakshi's brother 'Azhagar'. The statue of the lord is made of stone and is a great masterpiece created from kallalgar. Several different statues in different postures of the Lord are all kept in the temple under the same roof and it is the best form of distinct temples in southern India.

The impressive main tower at the entrance is believed to have been built by the Pandyan Kings. Jatavarman Sundara Pandyan (1251-1270 AD) has beautified the 'vimana' with gold plates. Later, during the reign .....

At a distance of 80 km from Madurai and 100 km from Tirunelveli, Srivilliputhur Andal Temple is an ancient Hindu temple situated at Srivilliputhur in Virudhunagar district of Tamilnadu. This is one of the popular temples in Tamilnadu and also one of the 108 divya desams of Lord Vishnu. The 11 tier Raja gopuram is the tallest in Tamilnadu and is also the Emblem of Tamil Nadu Government.

The temple is dedicated to Lord Vishnu, who is worshipped as Vatapatrasayi and his consort Lakshmi as Andal. It is believed to be the birthplace of two of the Alwars, namely Periazhwar and his foster daughter Andal. The Alwars lived in 8th century, so that the existence of the temple can be traced even before. Vatapatra Sayanar Temple was constructed by the King Villi who ruled the place. The tall temple tower was constructed by Peria Alwar with the help provided by the Pandian king Vallabadevan (765-815 AD). The Andal Shrine had been constructed by different kings of Pandya dynasty at different times. .....

At a distance of 4 km from Madurai Junction Railway Station, Gandhi Museum is a museum situated in Madurai. It is one of the popular museums in Tamilnadu, and among the prime places to visit as part of Madurai tour packages.

The Gandhi Memorial Museum in Madurai was established in 1959 as a tribute to the efforts of our father of the nation, Mahatma Gandhi. It is one of the five great Gandhi Museums in the country which depict the life of the Father of the nation and India's freedom struggle from 1757 until 1947. Located in the heart of Madurai city, the museum is one of the best Madurai places to visit as it houses a wealth of remarkable mementoes associated with Indian history.

The museum building is a former 17th-century palace constructed by Nayak Queen Rani. Gandhi Museum comes under the Peace Museums Worldwide selected by the United Nations .....

At a distance of 5 Kms from Madurai Junction Railway Station (on NH 49, towards the banks of Vaigai river), Vandiyur Mariamman Temple is built in the memory of Lord Vigneshwara. It is a popular temples near Madurai city.

Float festival is conducted in the month of Jan/Feb in the tank in a colourful way, which attracts thousands of tourists.

At a distance of 12 kms from Madurai, Narasingam is famous for the Cave temple of Yoga Narasinga Perumal constructed in 770 AD by Madurakavi who was the minister of the Madurai King Paraanthaka Nedunchelzyan. The sculpture of Narasinga Perumal is carved out of the Aanaimalai Hill rocks. This temple is a good example of the cave sculpturing of the Pandya Kingdom. In front of this there is a stone temple for the goddess Sri Narasingavalli.

To the west of Narasinga Perumal temple, there is another cave temple constructed in 8th century AD by Pandia King. In this temple the deity Muruga and the goddess Devasena are seen. On the outer wall of this temple the sculptures of the cock and peacocks are formed beautifully.

At a distance of 23 kms north-east of Madurai (4 Kms from Alagar Koil), Pazhamudhir Solai is a beautiful temple created in the memory of Lord Subramaniya who is worshipped by several people in southern India. It has great sculptures of lord subramaniya encarved in wood and marble and is a wonderful temple with giant steps in the front of it.

People worship the temple by moving across the periphery of the temple a several number of times, with the hope that their wish would come true. It is the giant temple of Lord subhramaniya in southern India and one of the most beautiful too. It is located on the hills of Alagar koil.