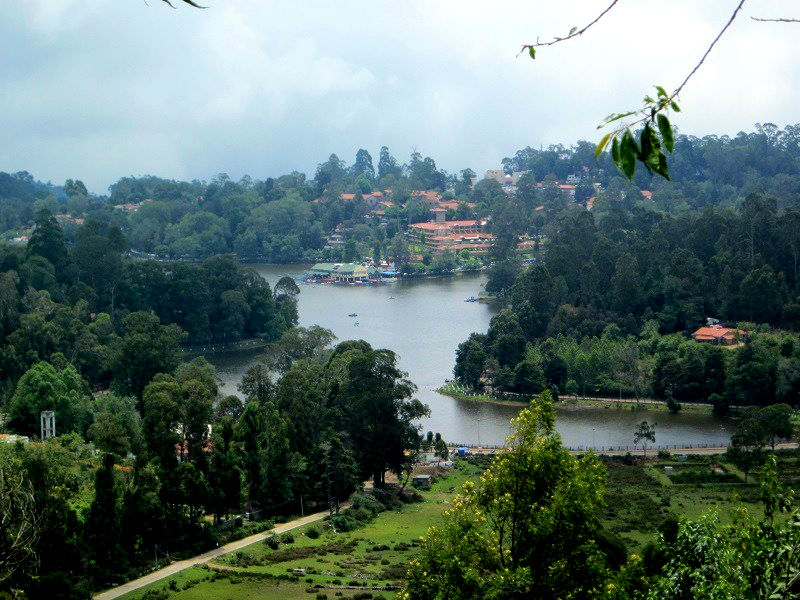 Peak Season: October to January & March to May

At a distance of 95 km from Dindigul, 117 km from Madurai, 162 km from Munnar, 169 km from Coimbatore, 253 km from Ooty, 272 km from Kochi, 469 km from Bangalore, & 528 km from Chennai, Kodaikanal, also referred to as Kodai is a beautiful hill station in the Dindigul district of Tamilnadu. It is one of the best hill stations not to miss in a South India tour and among the top places to visit in Tamilnadu.

Often referred to as the 'Princess of Hill stations', Kodai is one of the popular places to visit in summer as part of honeymoon trip. It is situated at an altitude of about 7000 feet (2133 m) on the southern tip of the upper Palani hills. It has several scenic natural attractions which are enjoyed by its visitors and make it a popular romantic destination. Coaker's Walk, Silver Cascade, and Kodai Lake are among the must include places in your Kodai tour packages.

The earliest residents of Kodaikanal were the Palaiyar tribal people. Modern Kodaikanal was established by American Christian missionaries and British bureaucrats in 1845, as a refuge from the high temperatures and tropical diseases of the plains. In the 20th century, a few elite Indians started relocating to this enchanting hill station and it started becoming popular among nature lovers. Kodai can be visited along with Madurai tour packages.

Kodaikanal is not extensively commercialized like Ooty and it offers a pleasant experience to tourists with relatively less crowd. Kodai Lake, Bryant Park, Coaker's Walk, Bear Shola Falls, Silver Cascade, Pillar Rocks, etc are some of the prominent places to visit in Kodaikanal. The hills offer beautiful views all around, especially from the Coaker's Walk.

The best time to visit Kodaikanal is from October to June, however, the weather remains a bit chilly during December and January. Being a hill station, Kodaikanal attracts a huge number of tourists during summer when the picturesque hill station looks the most colorful. However, those who wish to go trekking, plan your trip to Kodaikanal between October and February.

Other Info
Internet Availability: Good
STD Code: 04542
Languages Spoken: Tamil, Marati, Malayalam & English
Major Festivals: Summer Festival
Notes/Tips:
In Kodaikanal bus station, there are several bus time tables printed at each shop in the station. Most of the timings mentioned are outdated or incorrect. You need to check with bus station enquiry for correct bus timing.

How to Reach Kodaikanal

How to Reach Kodaikanal - Full Details

Top 10 Places to Visit in Kodaikanal

#1 of 20 Places to Visit in Kodaikanal

The lake is often represented in promoting Kodaikanal Tourism. Spread across an area of 60 acres, the Kodai Lake was built in 1863. Sir Vere Henry Levinge, the then Collector of Madurai, was instrumental in creating the lake. The lake is surrounded by beautiful valleys, a boat club, and buildings from the colonial period. There is a walkway around the lake that offers wonderful views of the place as part of Kodai tour packages. The 5 kilometers path that skirts the periphery of this lovely lake is a favorite walk for the locals and tourists alike.

Rowboats and pedal boats can be hired at the Boat Club. Horses and .....

#2 of 20 Places to Visit in Kodaikanal

At a distance of 0.5 km from Kodaikanal Bus Station, Coaker's Walk is a paved path situated in Kodaikanal. It is one of the most scenic places to visit in Kodai.

Constructed by Lt. Coaker in 1872, Coaker's Walk is a 1-kilometer paved pedestrian path along the edge of steep slopes on the southern side of Kodai town. It is one of the must-visit places as part of Kodai packages. The path, winding around Mount Nebo, starts in front of the Van Allen hospital, running parallel to the Van Allen Hospital Road, and joins the main road beside St.Peter's Church, providing a stunning panoramic view of the valleys and plains. On a clear day, one can view as far as Dolphin's Nose, the valley of the Pambar River, Periyakulam town, and even the city of Madurai.

The evening is the best time to experience the beauty of this place when the mystic clouds slowly .....

#3 of 20 Places to Visit in Kodaikanal

At a distance of 700 meters from Kodaikanal Bus Station, Bryant Park is a wonderfully maintained garden situated towards the South-East corner of Kodai Lake. Along with Kodai Lake, this is one of the must visit places in Kodaikanal tour.

Occupying an area of 20.5 acres, the park was planned and built-in 1908 by a forest officer from Madurai, H.D.Bryant, and named after him. With 325 species of trees, shrubs, and cactuses, the park is a rainbow of stunning flowers during the monsoon and winter season. A large section is dedicated to nearly 740 varieties of roses. Ornamental plants are cultivated in a nursery for sale. The park organizes horticultural exhibits and flower shows every summer, to coincide with the peak season. This is one of the most scenic Kodaikanal tourist places.

There is a beautiful glasshouse inside the park with nicely organized .....

#4 of 20 Places to Visit in Kodaikanal

At a distance of 7 kms from Kodaikanal Bus Station, Pillar Rocks is a set of three giant rock pillars which stand 400 feet high from the ground. The rocks stand majestically and offer wonderful views amidst thick vegetation and cloudy mountains. This is one of the best tourist places to visit in Kodaikanal and among the most scenic places in Kodai.

Managed by the Tamil Nadu Forest Department, the viewpoint of Pillar Rock is situated on the Moir Point road. A small and beautifully garden, glowing in the colors of the seasonal blooms adds to the charm and the picture perfect beauty of the place. In the shadows of the pillars are shady woods that invite picnickers. The dramatic view and the scenic surroundings make Pillars Rocks a popular picnic spot among locals and tourists.

During winter and monsoons, the rocks are surrounded by thick clouds and tourists keep waiting for long time for the clouds .....

#5 of 20 Places to Visit in Kodaikanal

At a distance of 8 km from Kodaikanal Bus Station, Silver Cascade is a mesmerizing waterfall situated in the town of Kodaikanal. This is one of the most popular waterfalls near Bangalore and among the prime place to visit on a Kodaikanal trip.

Cascading down from a height of about 55 meters (180 ft, the Silver Cascade waterfall is formed from the outflow of Kodaikanal Lake. It is one of the most visited tourist places in Kodai. The name 'Silver cascade' is given to this fall, owing to the colour of the water which appears silver when flowing down the 55-meter high cliff.

There is a dedicated viewing platform in front of the waterfall, which serves as an excellent point to view the flowing waterfall down in a pool. One can easily reach the silver Cascade falls via local transport .....

#6 of 20 Places to Visit in Kodaikanal

At a distance of 8.5 kms from Kodaikanal Bus Station and 1.5 km from Pillar Rocks, Guna Cave is wonderful tourist spot in Kodaikanal on Moir Point road. The cave is formed between two large Pillar Rocks. It is one of the best tourist places to visit in Kodaikanal. This large, dark and ancient cae is also called as Devil's Kitchen.

Situated amidst thick forest on hilltop behind Pillar Rocks, Guna Caves is one of the top visited places in Kodaikanal. The path to Guna Cave passes through a beautiful pine forest with roots of the trees emerged on to the ground providing unique setting to this place. Apart from the historical importance, the beauty of the nature makes it a popular tourist spot in Kodaikanal.

Visitors can view the cave from a distance as the surroundings of the cave are closed for security reasons. From the hill top, visitors can get a glimpse of beautiful valleys and Pillar Rocks on .....

#7 of 20 Places to Visit in Kodaikanal

At a distance of 10 km from Kodaikanal Bus Station and 3 km from Pillar Rocks, Moir Point is a historic place and beautiful view point in Kodaikanal on Berijam Lake road.

Moir Point offer breathtaking views of the highest peaks around Kodaikanal. It is one of the important view points in Kodaikanal and a beautiful tourist spot. There is a small park developed at this spot with a monument.

The site is named after Sir Thomas Moir, an engineer who constructed the Goschen Road in 1929. This point joins the Berijam Lake raod with Kodaikanal here. There is a monument remembering Thomas Moir at the viewpoint.

The park near the Moir Point was recently upgraded making it more attractive. This is a major tourist spot and attracts lot of crowd. There are several shops selling the basic needs. It is adjacent to the main road towards Berijam Lake and easily accessible.

#8 of 20 Places to Visit in Kodaikanal

At a distance of 8 kms from Kodaikanal Bus Station, Dolphin's Nose is flat rock projecting over a breathtaking 6,600 feet deep. It is an undisturbed area 1 km down a very steep rocky trail beginning soon after Pambar Bridge. It is one of the most scenic places in Kodai.

Orange juice vendors along the trail offer a welcome rest stop. Beautiful views of steep rocky escarpments rising from the plains can be seen. The old village of Vellagavi can be reached through a rugged bridle path here. A short paved walkway leads from the road here to Pambar falls.

#9 of 20 Places to Visit in Kodaikanal

At a distance of 3 kms from Kodaikanal Bus Station & 512 Kms from Chennai, Bear Shola Falls is a tall waterfall in a Reserve forest. It is said that bears used to drink water at top of the falls, and the falls are called so. This is one of the top places for sightseeing in Kodaikanal and one of the best waterfalls in kodaikanal.

The approach road to the falls is bumpy and hilly. The falls offer best views just after monsoon during the months of September & October. You don't find any water in summer season. The pathway from the main road follows through dense forest amidst serene location. Apart from the majestic waterfall, the walk through the forest itself is a wonderful experience.

Height of the falls is about 40 feet and the water drops into a small pool. Swimming here is safe if the water flow is not fierce. This place demands a 10 minute walk from the road point. The waterfall attracts large number of visitors during .....

At a distance of 21 km from Kodaikanal, Berijam Lake is an artificial lake situated in Kodaikanal. It is one of the popular places to visit near Kodaikanal.

Berijam Lake is at the old site of Fort Hamilton and is situated in the upper Palani hills, overlooking the surrounding landscape. It was formed as the result of the construction of a dam with sluice outlets and is part of a micro-watershed development project. Berijam Lake supplies drinking water to Periyakulam town. It is one of the must include places in Kodai Tour.

Surrounded by the lush green pine plantations, the Berijam Lake with its serene beauty has caught the imagination of artists, nature lovers, and tourists. The lake is also an important conservation center for local flora and fauna. Birds such as serpent eagles, rosefinch, leaf-warblers, and pale rumped swallows can be spotted .....