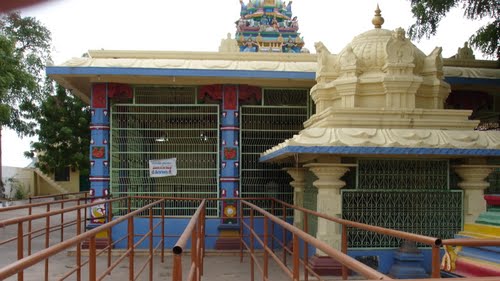 #5 of 7 Places to Visit in Nalgonda

At a distance of less than 1 km from Mellacheruvu Railway Station, 91 km from Nalgonda, 52 km from Miryalaguda and 200 km from Hyderabad, Sri Shambhu Lingeswara Temple is located at Mellacheruvu in Nalgonda district of Telangana.

Sri Shambhu Lingeswara Temple is one of the most celebrated temples in Nalgonda district. The presiding deity the temple of is Lord Shiva in the divine form of Sambhu Lingeswara Swamy. Lord Shiva here is believed to be self incarnated. The temple is believed to be at least thousand years old making it one of the ancient temples dedicated to Lord Shiva in the state. The temple architecture reflects the glory of Kakatiya dynasty. A notable feature of the temple is that on top of the Shivalingam there is a circular hole about 2 inches (5 cm) and water keeps flowing through the hole in all seasons. This is also known as Swayam Abhishekha Linga (self purifying linga). There is also a belief that the Shivalinga in the temple is growing in height.

According to the legend, during the Kakatiya period, a cowherd saw a cow go and empty its udder over Shiva Linga. A cowherd doesn't know that it is Shiva Linga. He made that Shiva Linga into 11 pieces and threw it away. But next day Shiva Linga manifested itself as original. Cowherd explained all these things to the local ruler and a temple was built around Shiva Linga.

Every year during Mahashivaratri, the Kalyanotsavam is celebrated in a grand manner which attracts thousands of devotees.