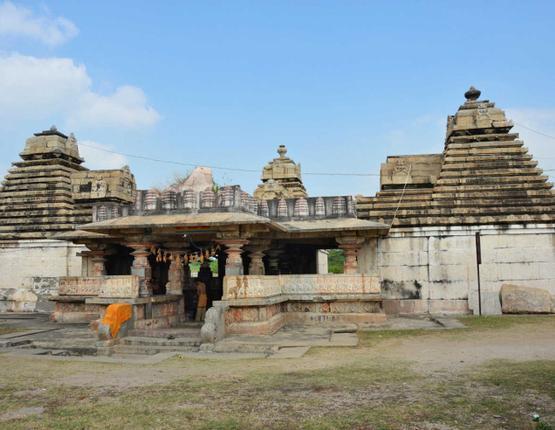 #4 of 7 Places to Visit in Nalgonda

At a distance of 1.4 km from Panagal Bus Station, 4 km from Nalgonda Bus Station and 104 km from Hyderabad, Chaya Someswara Temple is a wonderful temple located at Panagal in Nalgonda district of Telangana. This is an interesting pilgrimage and historical site to visit from Nalgonda & Hyderabad.

Sri temple was built during 11th - 12th centuries by Cholas. The temple got the name as it is believed that the formation of relentless shadow (Chaya in Telugu) of a pillar falls over the main deity of Shivalingam throughout the day. This amazing temple, engineered by the Kunduru, testifies the fantastic creative thinking and scientific knowledge of its architects. The complex houses three deities - Brahma, Vishnu and Shiva facing three different directions connected by common mahamandapa. The temple also demonstrates wonderful sculpture and art work.

The temple is known for its architecture. One of the garbhagrihas situated in the west and facing east contains a continuing shadow of a pillar throughout the day. This mysterious shadow is a huge attraction of the temple. The chaya that falls on the deity looks like a shadow of one of the pillars carved in front of the sacred chamber. But it is not actually the shadow of any pillar. The dark area is formed by the reflection of light through multiple pillars placed in front of garbhagriha and the shadow is a consolidated shadow of those four pillars. The pillars in the temple are strategically placed so that the light falls at the same place throughout the day.

The pillars of the temple are decorated in great detail with relief sculpture of episodes from Ramayana and Mahabharata. Several sculptures collected from this area are preserved at the museum constructed in the compound of Pachala Someswara Swamy temple. Some of the ancient shivalingas preserved in the museum were collected from a village called Yelleswaram, which was submerged during the construction of Nagarjuna Sagar Dam.

Pachala Ramalingeshwara Temple lies 1.2 km from Sri Chaya Someshwara Temple in Panagal Village is another wonderful place that can be visited.