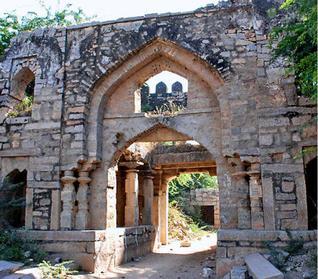 #2 of 7 Places to Visit in Nalgonda

At a distance of 1.3 km from Devarakonda Bus Station, 60 km from Nalgonda and 111 km from Hyderabad, Devarakonda Fort is located in Devarakonda town in Nalgonda District of Telangana. This is one of the important historical sites to visit around Nalgonda & Hyderabad.

Devarakonda Fort acted as a prominent fortified defensive structure of the rulers of Recherla Velama dynasty that rules parts of Telangana after Kakatiyas. It was built in the 14th century by the Velama Kings. The territory of Devarakonda was developed by the Padma Nayaka Velama rulers. The fortress was controlled by the ruling family from 1287 AD to 1482 AD. Then the fort was ruled by Maada Naidu who was the 8th king among the Padma Nayaka rulers. He was a great warrior and an educationist apart from being a kind ruler. During his reign, Devarakonda flourished with many temples and heritage sites.

This fort is famous for its architectural brilliance. The fort is surrounded by seven hills with some great rocks and boulder and few forest. The fort built over a hilltop has large walls with curved bastions along with it. The fort ramparts were built with artillery and cannon points. The fort complexes are built up to 2 storeys. There are many granaries found here. It has a magazine house, large living area and few small houses. There are temples of Lord Rama and Lord Shiva inside the fort. Also there is a small lake that provided water source to the residents of the fort.

Now the fort lies in ruins and acts as a tourist attraction.